The Red Heifer of Market Doom

A red beast was born at the Temple of Israel that prophecy says will bring about the end of times.

The New York Post is reporting that the end is nigh:

An all-red heifer was born at the Temple of Israel on Sept. 4, fulfilling a biblical prophecy to “reinstate purity to the world and the rebuilding of the Holy Temple.”

The sacrifice of a red heifer is essential to the construction of a third temple in Jerusalem, which would bring the coming of the Messiah and the final judgment.

Speaking of biblical archetypes and foundation stories, I spent last night with the acclaimed professor and lecturer Jordan B. Peterson. He gave a well-attended talk at the Hippodrome in Baltimore.

I’ve admired Peterson for standing up against the excess of political correctness and neo-Marxist dogma so prevalent in the world today. Risking his career and the internet mob, he stood up to the board at the University of Toronto and gained a significant following among all right and logical thinkers.

After seeing his performance, I further admire his business acumen. His book 12 Rules for Life has sold over 200 million copies and is now translated into 12 languages. He made another $30,000 to $40,000 in three hours last night.

The meet-and-greet, which offered a quick handshake and picture, cost an additional $100 over the ticket price and was purchased by 150 people. The wait was over an hour. He has many millions of YouTube followers.

The crowd was mostly young white males, some with their dates, though there were more than a few black men in evidence. The dress code was from sports coats to neck tattoos. There was a bit of the cult/groupie feel going on, but it was not overwhelming.

Sometimes it's just good to listen to smart people talk about what they know, and that’s what Peterson gave us. He has in effect found a way to monetize 30 years of lectures. And his rants against communism make one feel blessed to live in a free market country such as it is.

Not to belabor the point, but the Berlin Wall fell in 1989. That means people under the age of 35 don’t have a firsthand experience of the terrible catastrophe of communism.

A resurgence of economic ignorance has spread among the youth who think they can do it better and are digging up these old, sorry, failed ideas from the past.

It would be nice to see young people pushing for open markets and cutting corruption, but alas, their answers are always more regulation and government oversight, which in turn leads to rent-seeking and cronyism.

But enough of that. Let’s talk about the market...

The Fed is pulling away the proverbial punch bowl. Chairman Powell will hike rates in September and again in December. This will bring the Fed rate to 2.50%.

Higher rates raise the price for money, of course. This is bad for the stock market longs, as equities have been moving up on stock buybacks financed with corporate bonds. Lots and lots of corporate bonds...

Corporate debt levels have climbed $2.5 trillion or more than 40% since the 2008 high. As a percentage of GDP, corporate debt is at an all-time high of 45%.

Say it Ain't So 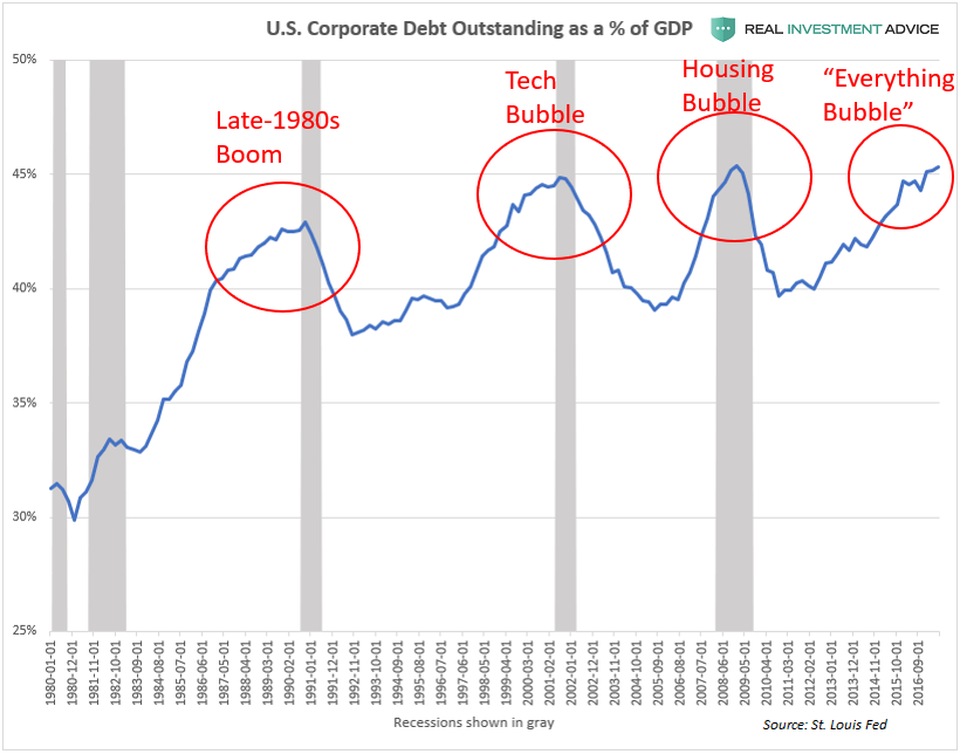 This is bad because corporate bonds compete in the market for investor dollars. As the Fed raises rates, the corporate bond yields become less attractive. Demand for the bonds falls, creating downward pressure on prices.

Perhaps you’ve already seen this in your “safe investments,” as many large bond funds and bond indices have seen a negative return year to date in 2018.

With falling value, companies won’t be able to fund stock buybacks. This could be the red heifer of equities.

Corporate insiders know this and have been selling all year. 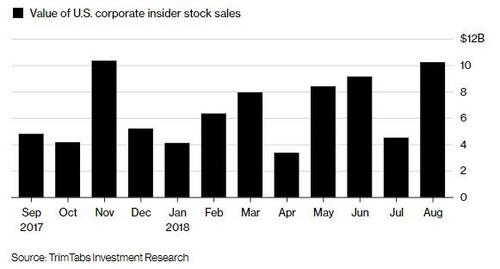