When the feds recently offered up an oil and gas lease in Alaska’s Cook Inlet, they only got one bid for the right to drill there.

This is insane and, as an energy investor, not something you should ignore.

You see, at one time, oil and gas producers, with their very deep pockets, bid on nearly everything that came to auction. But they’re not as loose with that cash as they used to be since they no longer have that privilege.

With the transition away from internal combustion and toward vehicle electrification, oil and gas companies are now being much more strategic with their spending as they prepare for the eventual steady decline in demand.

While there’s no way to guarantee such predictions, based on the trends, we can at least safely assume that electric vehicles will continue to eat into internal combustion vehicle market share going forward. Of course, this will affect demand for oil.

According to IHS Markit, as a result of the electric vehicle revolution, by 2050, oil demand will fall by 25%. And quite frankly, I think this is a conservative estimate. 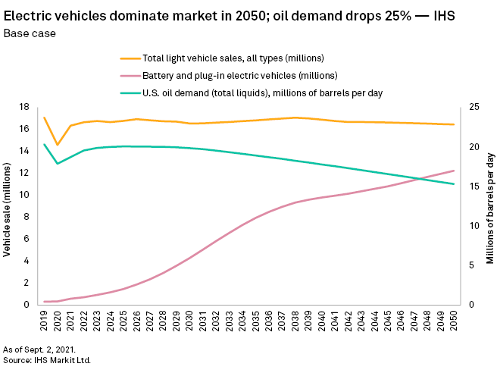 But even if it’s not and it is only 25%, that’s definitely enough to cause the oil and gas industry to reevaluate its long-term investments.

And rest assured, that’s what it's doing.

It wasn’t long ago when oil prices skyrocketed following the Russian invasion of Ukraine.

Typically, when oil prices soar, oil and gas companies increase production. But last year, when oil got as high as $130 a barrel, most oil and gas executives said they weren’t interested in increasing production.

According to a survey published by the Federal Reserve Bank of Dallas, a sizable number of these executives even said they wouldn’t increase production at any price because of investor pressure to maintain capital discipline.

Translation: Reduced demand is coming, and we need to hoard cash and prepare for the inevitable.

Of course, we won’t really see any meaningful effect on demand for at least another six–eight years, but consider the fact that it can take as long as 10 years to go from lease to production.

Folks, in 10 years, more than half of all new passenger vehicles sold will be electric — and the big oil machine knows it. You should, too.

I’m not saying you can’t make a boatload of cash in oil and gas today. In fact, I know you can.

But if you’re not getting exposure to the electric vehicle space too, you’re going to miss out on one of the greatest investment opportunities of the 21st century.

The future of transportation is electric.

And this isn’t just my opinion. It's a fact.

Perhaps you know the old saying “In God we trust; all others bring data.”

Well, that’s exactly what I’m sharing with you today.

In fact, I even put together a short research report that highlights the sources of this data, as well as the public companies that are likely to benefit most from this transition from internal combustion to vehicle electrification. You can check that out here.