The Oil Bear Market is Back

Will we see dividend cuts?

The oil bear market is back.

A bear market occurs when prices fall by 20% — and that's what we have for West Texas Intermediate crude as of yesterday.

After a near 20% gain in the month of April, oil traded around the $60 per barrel mark for most of May and June but saw sharp declines throughout July.

This chart tells the story well: 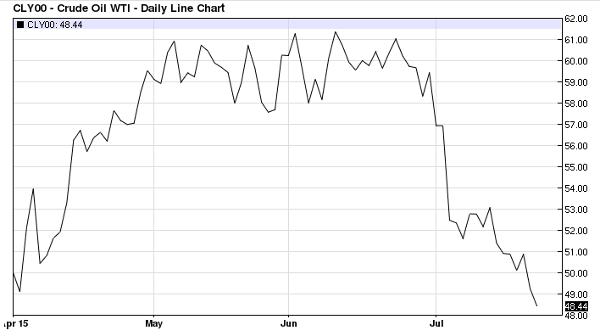 The month of July erased three previous months of recovery for WTI, as several colliding factors ushered in low prices.

It began with the Greek referendum and a quick 10% drop on fears of a “Grexit.”

Then a stronger dollar, a weak Chinese economy, and a dramatic boost in crude oil in storage in the U.S. prompted deeper cuts.

However, the biggest factor, and what may well cause a long-term lag in world crude markets, was a deal between Iran and the United States that would lift sanctions on the Islamic Republic and deepen a global glut of crude.

Although I just mentioned several catalysts for oil's decline in June and July, the real reason remains the same: Supply outweighs demand.

Because of the fracking boom, U.S. oil production is at its highest point in several decades. Saudi Arabia, largely in response to U.S. shale production, has boosted its production to all-time highs. Iraqi production is breaching records, too.

But now that Iran will legally be able to resume exports to Europe and all other countries that followed the sanctions, the glut looks like it could become even worse.

As you can see, Iran's oil exports had been hit hard by sanctions: 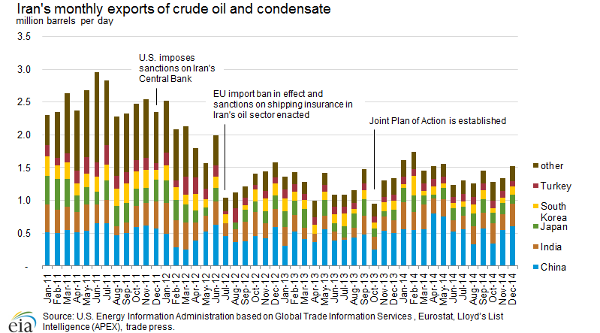 From a high of 3 million barrels per day to a low of 1 million, it looks like a reinvigorated Iranian oil industry will hurtle debt-ridden U.S. and Russian oil producers into dangerous territory, lest some other catalyst usher in a bull market.

Not only will Iran resume exports, but the country will also be able to resume new drilling and production programs with foreign oil majors like Total, Chevron, and others.

According to Iran's Minister of Industry, Mines, and Trade, Reza Nematzadeh, Iran will focus on the oil, gas, and auto industries. The country holds the world's largest proved reserves of natural gas and fourth-largest reserve of oil.

On Thursday, the country announced it planned to finalize $185 billion in new oil and gas projects by 2020 and had already sealed the deal on $2 billion worth.

Once sanctions are officially lifted next year (the U.S. Congress still has to have its say), Iran will begin exploring, producing, and exporting crude and natural gas at full bore.

And some companies may take drastic measures to cut costs...

After the bear market last fall, oil companies big and small went to great lengths to reduce costs and sustain some profit.

Oil majors slashed anywhere from 10% to 15% of their workforces, while small players slashed new drilling programs and pressured services companies to reduce the cost of tools, services, and equipment.

And this strategy worked insofar as it caused the recovery in April, May, and early June. However, with oil back down to March lows, it seems companies will go even further.

Yet untouchable, but now more tenuous, are dividends.

The only major oil company to cut its dividend payment to investors was Italian major Eni (NYSE: E). But now that a bear market has resumed at a time in the fiscal year when oil and gas companies simply do not cut costs, it seems dividend payments may be an easy bandage on the low price wounds.

I wouldn't be surprised to see major firms cut dividends until oil returns to a reasonable level. Doing so will hurt income that many investors depend on and will almost certainly crush share prices.

As soon as a company cuts its dividend, you can bet investors will flee.

To avoid such a calamity, it makes sense for investors to exit before these drastic cuts take place and re-enter after the sell-off.

For investors who still want income, though, the solution should be master limited partnerships. Like REITs, MLPs pay out 90% of income as dividends in order to avoid corporate income taxes.

Because these companies pay dividends that are very high — sometimes over 10% per share — income investors should flock to them when oil majors cut payouts.

Oil Investors Buy Shale Again
Energy and Capital editor Keith Kohl explains why a shale investment now could pay off huge in the third quarter.
Nuclear Investing After Iran Deal
Energy and Capital editor Alex Martinelli discusses nuclear investing after the Iran deal.
Finding the Real Value in Oil Stocks
Energy and Capital editor Keith Kohl shows readers two ways that everyday investors can find winners when Iran floods the global market with oil.
Where is the Oil Cycle?
Christian DeHaemer explains why we could see oil at $33 a barrel.
Hydrogen Fuel Cells: The Downfall of Tesla?
Lithium has been the front-runner in the battery technology market for years, but that is all coming to an end. Elon Musk is against them, but Jeff Bezos is investing heavily in them. Hydrogen Fuel Cells will turn the battery market upside down and we've discovered the tiny company that is going to make it happen.