The Oil and Gas Bull Market Is Still Early

A few months ago, my natural resource guru put out an exclusive investment report detailing a unique opportunity unfolding in the South American oil and gas sector.

He’s one of the most insightful and intellectual market analysts there is. You might even call him a maverick of sorts, seeing emerging trends well before the Street. Quite frankly, he’s an eccentric.

His condo association recently threatened to kick him out if he didn’t stop feeding the birds from his fifth-floor balcony. You can imagine what his neighbors below had to endure.

And that makes him the perfect fit for my unconventional investment research firm.

He’s called some of the greatest investment booms in the commodities sector for the last 17 years, including the gold bull run in the 2000s, uranium, silver, palladium, and, most recently, fertilizer.

But like I said, a few months ago, Luke recommended two South American stocks — specifically in Argentina.

In a report he titled “Project Petrogonia,” Luke knew that with Putin invading Ukraine and shutting off natural gas flowing to Europe, the EU would be in dire need of getting natural gas from elsewhere. And that “elsewhere” is North and South America.

Unfortunately, it has turned into a life-or-death situation for the Europeans.

As you read this, Europeans are desperately looking for other forms of fuel to warm their homes this winter and cook their food.

This shocking chart says it all: 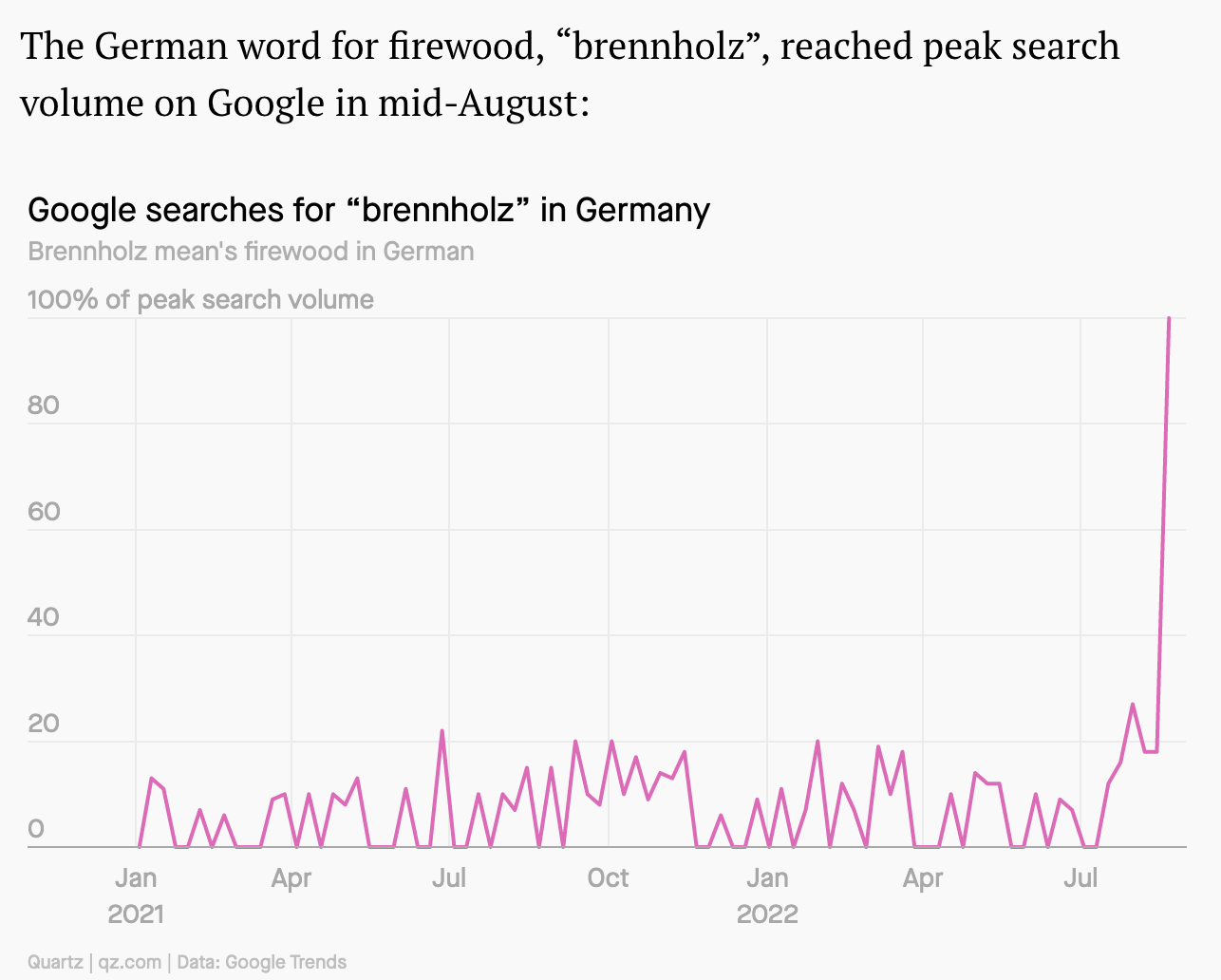 In fact, German power plants are importing coal at a record pace.

Why? Because it’s the most reliable and cheapest source of energy for Germany to keep the lights and heat on this winter.

Germany is warily turning to its most reliable — and environmentally polluting — fossil fuel. At least 20 coal-fired power plants nationwide are being resurrected or extended past their closing dates to ensure Germany has enough energy to get through the winter.

Even environmental groups agree this might be [the] best short-term solution.

Earnings from burning more coal will go into constructing more wind turbines and solar panels, but environmentalists are worried the German government isn't doing enough to ensure that.

Still, even the country's staunchest environmentalists admit that coal is the quickest and most cost-effective answer to Germany's energy crisis.

"We can understand the government restarting coal-fired power plants in Germany," says Greenpeace Germany's Karsten Smid, "but on one precondition: Coal is destroying the climate. So in the end, we do not accept any additional CO2 emissions without a commitment to savings."

Smid says the government will need to ensure that every ton of CO2 emitted from burning coal will be offset by reducing emissions elsewhere in the economy.

The problem, says Smid, is that the German government hasn't promised that. Instead, it's given a green light to operators to burn more coal so that Germany — and its economy — doesn't freeze this winter.

Quite the dilemma: Don’t use coal and freeze, or burn coal and don’t freeze.

And that brings me to the South American stocks YPF and Vista Energy.

YPF and Vista control the largest shale basin outside of “King Permian” in West Texas.

Both are natural gas juggernauts, a fuel nations around the globe are begging for.

Since the invasion of Ukraine, YPF's and Vista Energy’s gas sales have exploded.

Their stocks have been ripping higher… 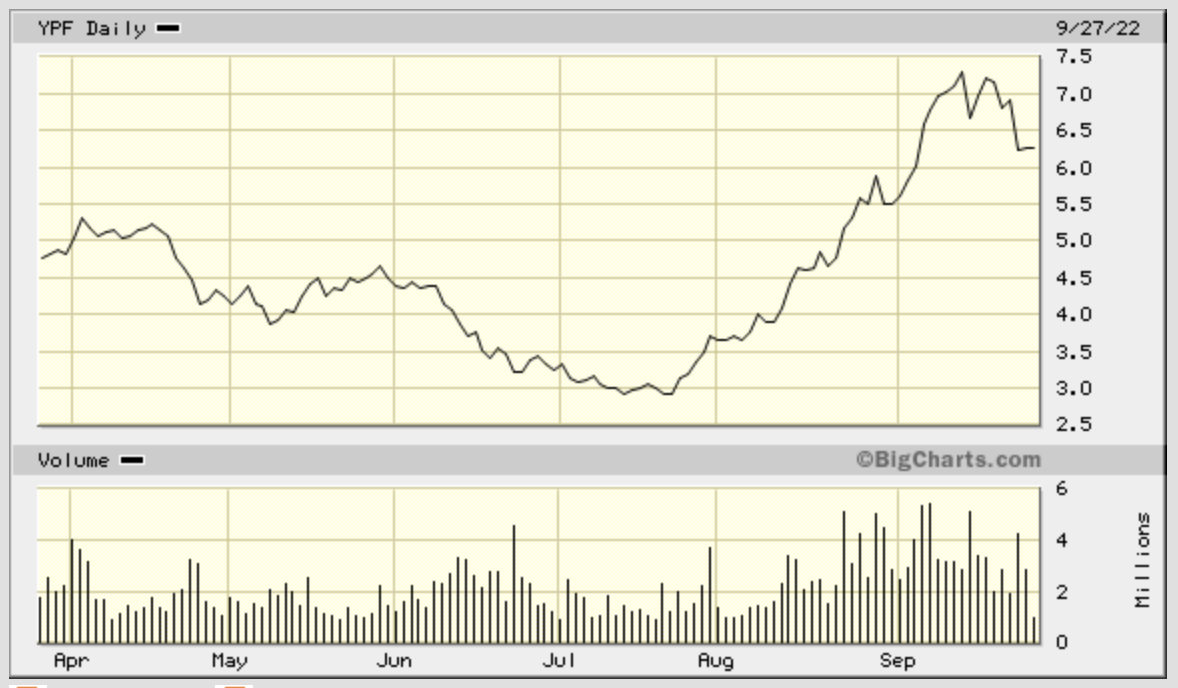 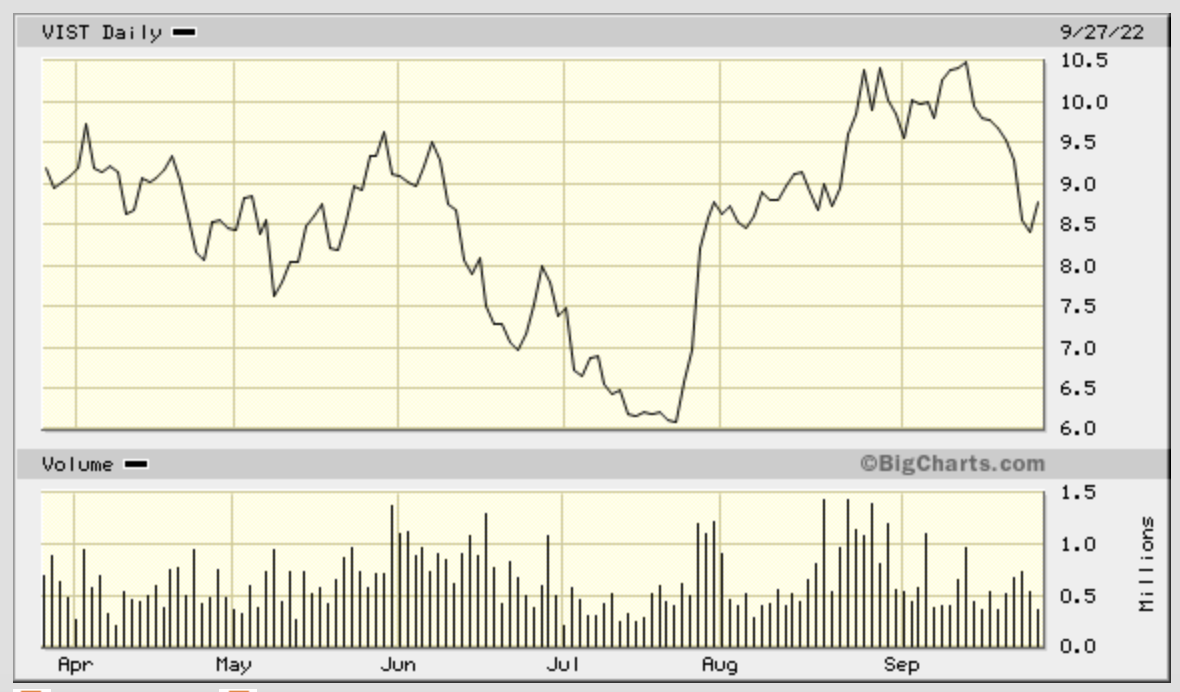 These stocks are still insanely cheap.

With energy-starved industrialized nations looking for every drop of gas, natural gas producers are going to be in a long bull market.

And the gas shortage just got worse.

Right before this article went to press, an announcement came out saying the Nord Stream 1 and 2 pipelines are spewing natural gas at the bottom of the Baltic Sea: 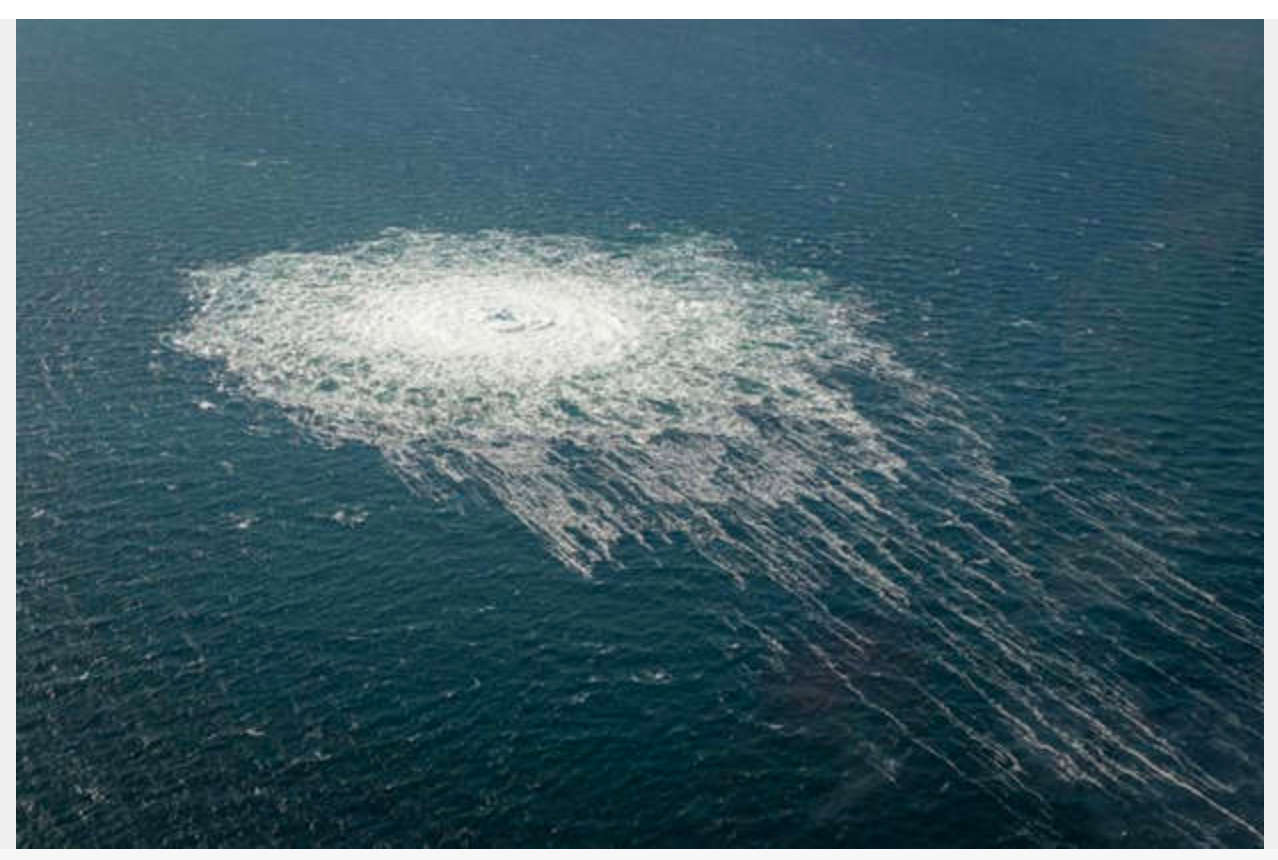 Nations will be scrambling to secure sufficient supplies for the winter.

In fact, India recently paid double the market price for LNG to ensure it has natural gas in the coming months: 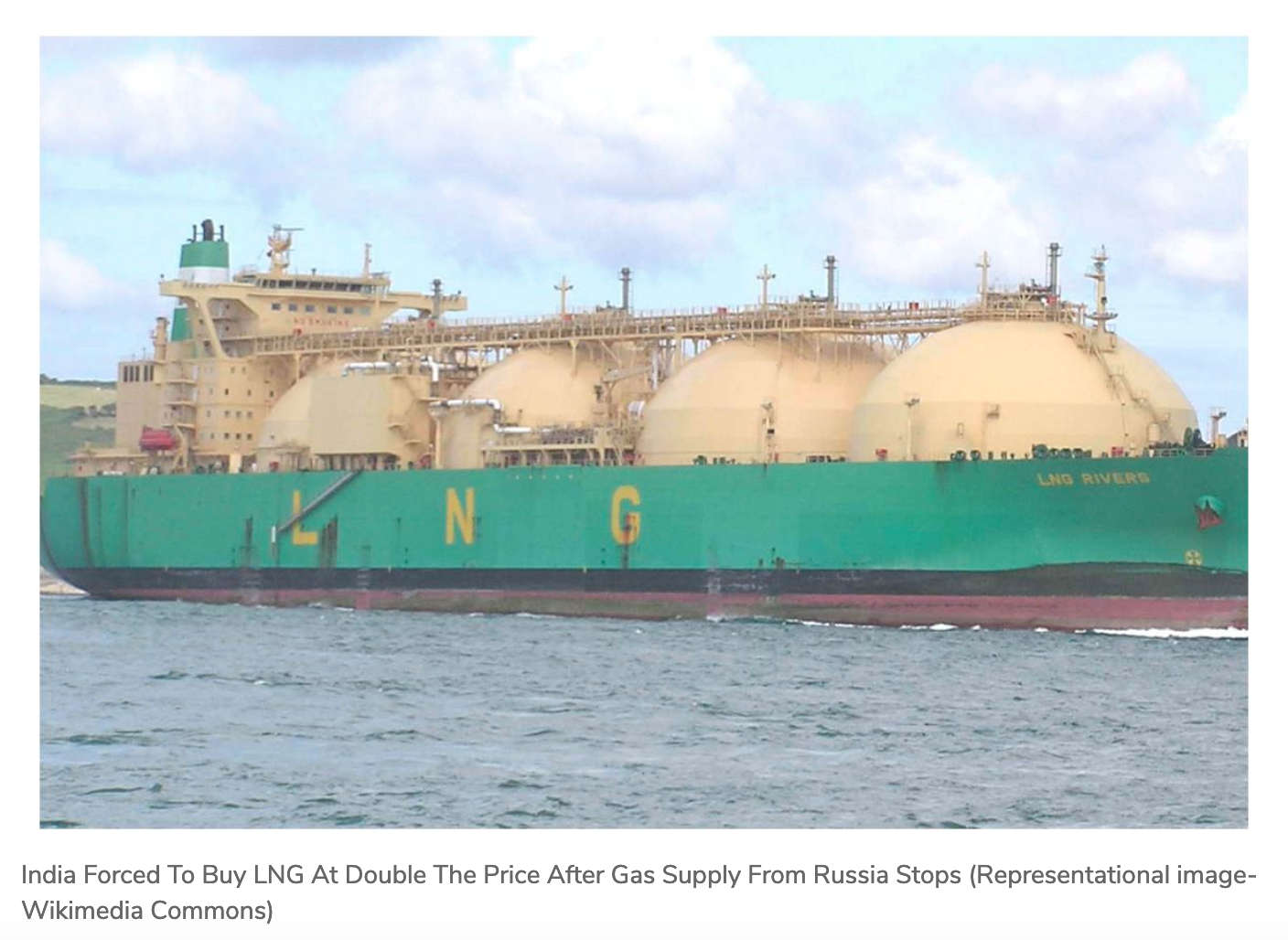 If nations desperate for energy get into a bidding war for natural gas, second- and third-world nations will find themselves in a life-or-death situation.

That’s why I’m recommending both YPF and Vista Energy for immediate purchase on current market weakness.

Energy stocks offer safety and stability in an uncertain market.

Also, we’ve put together an exclusive report on three stocks emerging as major players in the Permian Basin in West Texas.

“King Permian” is supplying Europe with lifesaving natural gas and will do so for a long time. Now is the time to invest.