The New Oil of the 21st Century

"Those who cannot remember the past are condemned to repeat it."

Although you may not recognize these words from philosopher George Santayana, you may have heard it paraphrased years later when Winston Churchill famously said, “Those who fail to learn from history are condemned to repeat it."

However, the lessons from the past aren’t all about doom and gloom.

And as more modern soothsayer Christian DeHaemer pointed out yesterday, investors can learn a good deal from history.

I’m willing to bet only a handful of my readers have ever heard of a young geologist named Ernie Berg.

Almost 82 years ago, he was working for Saudi Aramco and charged with mapping an area near Haradh in the eastern province of Saudi Arabia. So when Berg noticed that a dry riverbed took a sudden turn, it led him to believe that a structural trap had formed.

There’s no question what he was after: Oil.

After a series of wildcat wells were drilled over the next several years, it was clear that a sizable oil field had been discovered, which was soon named Ghawar.

Although Berg's name may have escaped your mind, I have no doubt that you’ve heard of the mighty Ghawar oil field. This massive field changed the oil game entirely and has accounted for over half of all Saudi Arabia’s oil production to date.

In 1951, when a group of executives from Standard Oil of California stood on top of a sand dune not far from the Ain Dar No. 1 well as it was brought into production, one member asked his colleagues if they could place the distinct smell that flooded his senses.

When the others shook their heads, he just turned to them and smiled.

History is “condemned” to repeat itself again, and this is a lesson all investors need to learn.

Just as the Ain Dar No. 1 well started production at the outset of the 1950s, there were roughly 25 million registered cars in the United States.

The executives at SoCal couldn’t have timed things any better because that number had swelled to nearly 70 million by the end of the decade.

However, my goal here isn’t to simply mark the explosive growth of the auto industry but rather to show you what’s going to happen over the next 70 years.

Tomorrow’s Ghawar field won’t be churning out oil to fuel our cars.

No, it’s become clear that tomorrow’s oil is lithium.

Specifically, I’m referring to the lithium-ion batteries that will fuel the transition to electric vehicles (EVs) that is already well underway.

Ten years ago, we would’ve been laughed out of the room for even suggesting that EVs might disrupt the auto industry.

For those who are still skeptical, perhaps pictures are more powerful than words: 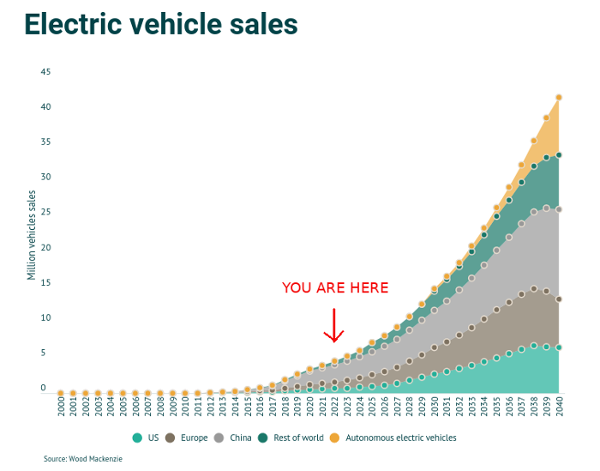 But as you may know, there’s a bit of a problem when it comes to today’s lithium supply.

For the first time in years, battery costs are rising due to the simple fact that supply of critical battery metals cannot match demand.

Last year, while everyone’s eyes were fixated on how high crude prices would rise (and rightfully so, as crude is setting itself up for its next run into triple digits), most investors missed the boat on lithium entirely.

Only a handful of investors realize that lithium prices increased 280% over the last year alone.

However, solving this crisis goes far beyond mining more lithium. As it stands now, the world’s largest lithium producers can’t keep up with the clamor for more… and more.

Like oil supply back when the Ghawar field was discovered, the global supply of lithium is controlled by a handful of companies that set their own prices...

Except this time is different as new disruptive technologies unlock new supply.

Just how disruptive are we talking?

Trust me — you HAVE to check this one out for yourself.