The Natural Resource Bull Market is Back

...And So is the Easy Money

Is it really going to be this easy to make money in the natural resources market again?

Nearly any investment exposure to precious and base metals has yielded a profit for the year.

My colleague Keith Kohl is killing it right now with lithium stocks, as supply concerns have caused prices to surge some 130% in the past few weeks.

Other colleagues, Nick Hodge and Jimmy Mengel, are also sitting on great YTD gains from their precious and base metal stocks.

Personally, I just took a great profit from a small copper miner, and I'm about to see a small gain from PALL, the palladium ETF.

There's little doubt: the natural resource bull market is back!

And right now, I'm looking to get back into silver.

Silver prices soared in the beginning of February, jumping 12% in the first 11 days of the month.

It was too much, too fast. And the market has cooled off a bit over the past three weeks, pushing silver prices to just under $15 an ounce at last look.

And I do think silver prices are going to continue to drop or hold steady in the very near term, but I am extremely bullish on silver for the mid and long term due to a widening supply deficit in 2016 and beyond.

The World Silver Institute expects sharp increases in both industrial and investment demand for silver this year.

Here are some the demand trends the World Silver Institute sees for 2016:

Meanwhile, global mine supply production is expect to drop 5% this year.

This will be the first time world silver production has fallen since 2002.

Going forward, global silver mine production is projected to continue falling through 2019!

All this is expected to widen the deficit in the silver market this year and beyond.

In the meantime, we still have time to make some early investments.

Back in December, I gave you two silver stocks that I like: First Majestic Silver (NYSE: AG) and Avino Silver & Gold Mines (NYSE: ASM). Both have seen gains of 26% and 24% respectively since that time, even with a recent pullback.

And I've promised to bring you more. So today, I want to deliver.

I want you to take a look at Endeavour Silver Corp (NYSE: EXK). 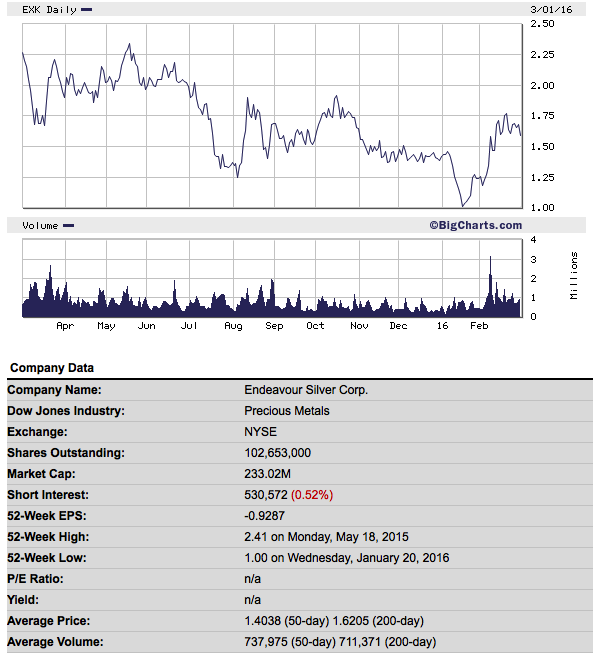 Endeavour hasn't reported its 4Q and FY 2015 financials yet. It's said that it will release that information on Friday. However, with silver prices falling further to average about $14.75 an ounce during 4Q 2015, I think it's likely the company will post a net loss for the year.

Falling production? Net annual losses? What the hell do I like about this company?

Endeavour is already one of the lowest-cost silver producers. Nevertheless, the company's all-in sustaining costs (AISC) averaged over $15 per silver-equivalent ounce. So you can see part of the reason it lost money last year.

This year, however, Endeavour expects its AISC to range between $12 and $13 per silver-equivalent ounce. That means, even at current silver prices, the company could be profitable again this year.

Aside from its production, the company has (according to its 3Q 2015 financials):

I really like the way Endeavour looks right now. And I'm buying it.

As I mentioned at the beginning of today's letter, I think silver prices are going to continue to drop or hold steady in the very near term. And that could drive share prices down a bit.

EXK could also suffer a bit if the company posts a net loss for FY 2015 on Friday, as I expect it will. So I'm looking to get into this stock a little closer to US$1.50.

Over the next several weeks, I think this is at least another 30% to 40% winner. I'll be looking to put in a limit order by the end of the week, depending on what the stock and silver market have in store for us.

As always, please do your own due diligence. You can see everything that I've told you and more about Endeavour Silver today on the company's website.