The Most Unexpected Rally in 2021 Will Be Oil

The end of crude is nigh.

At least, that’s what we’ve been told over and over again, isn’t it?

Ever since we took the plunge into the new COVID era, the death of oil has been quite a popular sentiment in the headlines.

We can’t blame anyone for thinking that way, either.

Ten months ago, we watched as oil prices utterly collapse, plunging into negative territory for the first time in history.

Personally, that moment was one of the most bullish signals I’ve ever seen.

The fact that we got to the point where companies were actually paying customers to take oil off their hands means there’s really only one direction prices can go — up!

Whether or not crude would rally from there wasn’t a question rooted in reality. It wasn’t a matter of if oil would rally but rather when.

Fortunately, it didn’t take long to get the answer.

Recently, WTI prices broke into new 52-week high territory, and oil has officially rebounded back to where it was just before the COVID lockdowns took effect.

So is the end of oil upon us?

We talked a little bit last month about how crude oil will fare during a Biden administration.

In fact, the president has been rather busy going after the crude market during the first few weeks of his term.

There’s been a lot of concern that his policies will absolutely crush the industry, leaving in his wake nothing but clean energy rainbows and a massive fleet of electric vehicles.

That sentiment is saturated throughout the media and plastered across headlines, isn’t it? It seems not a day passes that I don’t see a headline portending the imminent collapse of the oil industry.

With a snap of his fingers, President Biden brought dreams of the Keystone XL pipeline expansion to a grinding halt.

If that wasn’t enough to make you pessimistic over oil’s future in the U.S., then his order to place a 60-day arrest on oil-and-gas drilling on federal lands — on his very first day in office — certainly did the trick.

Oil is set for one helluva comeback this year.

The Most Unexpected Rally in 2021 Will Be Oil

Forget the fact that crude prices have run up to nearly $60 per barrel recently.

According to the Energy Information Administration's (EIA) projections, the supply/demand fundamentals — which have been thrown out of whack during the pandemic — will tighten through 2022. 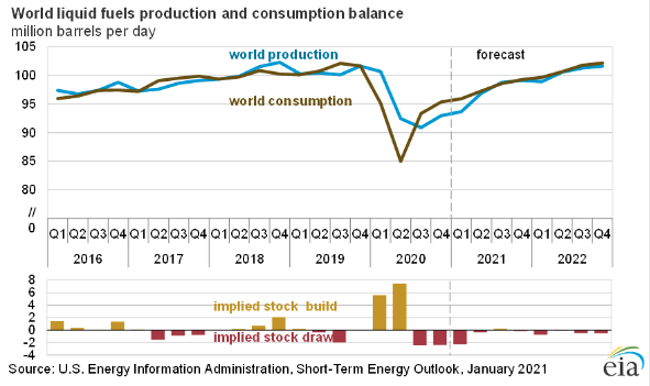 It’s only a matter of time until global demand climbs back over 100 million barrels per day.

Except there’s one serious concern to keep in mind as demand rises.

If there’s one lesson good drillers learned over the last few years, it’s fiscal discipline. Companies that failed to put their financial houses in order were quickly snuffed out or swallowed up by the bigger fish in the pond.

Yet the cold, bitter truth is that a lot of drillers weren’t profitable at that level to begin with!

Couple the low oil price environment with President Biden’s aggressive oil policies, and we have a recipe for lower output here in the United States.

The latest Baker Hughes rig count showed that as of January 29, 2021, there were just 295 rigs in the U.S. drilling for crude oil — more than 400 fewer rigs than were active a year ago!

Drilling budgets have been slashed dramatically over the last year, with companies turning to their drilled-but-uncompleted (DUC) wells to keep production steady. These wells comprised more than one-third of new production in the Bakken.

However, the DUCs won’t save us in the long run.

Goldman Sachs is already clamoring for oil to top $65 per barrel by the end of this summer.

We’re in a perfect storm for higher oil prices, and the only question left is where to find those beaten-down, hidden investment gems inside the oil sector.

We’ll answer that question next time.