Louisiana is home to the largest liquefied natural gas (LNG) projects in the world.

Data from the Federal Energy Regulatory Commission (FERC) shows at least 17 new LNG projects currently approved and proposed for the Bayou State that are estimated to increase output by over 30 billion cubic feet per day (Bcf/d).

One such project being developed by Golden Pass Products is slated to spend $10 billion to expand LNG facilities in Sabine Pass, LA. Golden Pass, a private company owned jointly by ExxonMobil (NYSE: XOM) and state-owned Qatar Petroleum, says the project will create about 9,000 construction jobs over a five-year period and over 200 full-time positions once the facility opens.

And that’s just one project.

Developer Energy Transfer Partners (NYSE: ET) and Royal Dutch Shell (NYSE: RDS-A) have also recently laid out a project framework agreement to construct a new LNG export terminal that’s estimated to cost between $12 billion and $16 billion in Lake Charles, Louisiana. They estimate this project will create at least 5,000 jobs during the construction phase and 200 permanent jobs when fully operational.

Here are maps from the U.S. FERC of the approved and proposed LNG projects in the United States right now. It’s clear Louisiana is the center for a boom in economic activity from LNG. 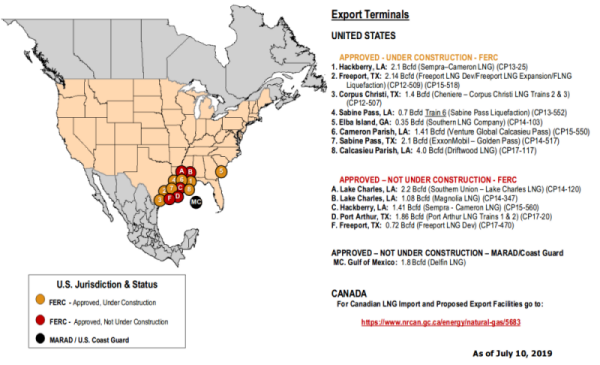 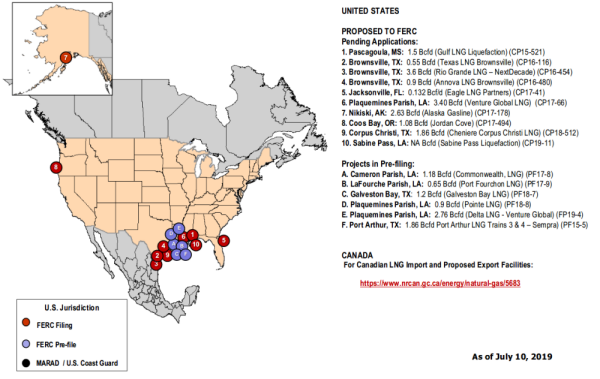 According to a recent report from Global Energy Monitor, America will invest over $500 billion in LNG projects

According to GEM, more than $1.3 trillion is being invested right now in over 200 LNG terminal projects around the world.

With hundreds of billions of dollars being invested in LNG facilities all over the world, investors are just now starting to earn big rewards.

Heck, in 2016, Tellurian was a penny stock! Today it commands a $1.7 billion market cap, having increased almost 2,600% in just three years.

And remember, this is a market that's just now taking off.

LNG producers like Cheniere and Tellurian have already paid regular folks just like you millions in profits. But there are still even bigger LNG investment opportunities lying in wait. Specifically, I'm talking about shipping the stuff.

See, the whole reason LNG even exists is because it's a much more affordable way to ship natural gas. Liquefied natural gas is just regular natural gas that's been cooled and condensed into a liquid.

And America definitely wants to export its LNG.

Back in May, the European Commission reported that LNG imports from the U.S. increased by 272% since 2018. EC data showed record U.S. LNG imports in March of this year totaling 49 Bcf.

What all this means is the global LNG boom isn't just about production. The companies that own LNG carriers are also positioned for massive gains.

DeHaemer is deep into one French company that owns and operates one of the largest fleets of LNG carriers. He says, "The global demand for LNG shipments is increasing at a rate so fast, there simply aren't enough ships in the world to transport all the natural gas."

In fact, this French company he's talking about is so busy that it's already contracted out through 2022. It has 16 multi-year contracts with Royal Dutch Shell alone — and a backlog of customer contracts worth over $3.4 billion. So it's no wonder this firm just posted recorded quarterly revenue.

There are no signs of slowdown for the LNG market in sight — only growth. I don't want to suck the wind out of DeHaemer's sails, but if you're interested in learning how you can invest in this company (and I don't see why you wouldn't be), you can check out a recent report DeHaemer published here.

In that report, DeHaemer tells much more about the company and explains how you can get France to pay for your retirement. Check it out here.