The Lie in the Market: Coal Is Dead

China signed the Paris Accord on Climate Change and made assurances to limit coal power. However, like Germany (and every other country), it cheats.

So it's not surprising that satellite imagery has uncovered hundreds of new coal-fired power stations that are secretly still under construction in China, despite the central government’s recent attempts to stop more coming online.

As they say, China is big and Beijing is far away.

Decentralization of the permitting authority has allowed 259GW worth of new coal power capacity to be built.

The extra new capacity in the pipeline nearly matches the entire capacity of the existing U.S. fleet of coal stations: 266GW.

That's a lot of coal demand. The surge of new plants will boost China’s capacity by 25%.

Here is the evidence: 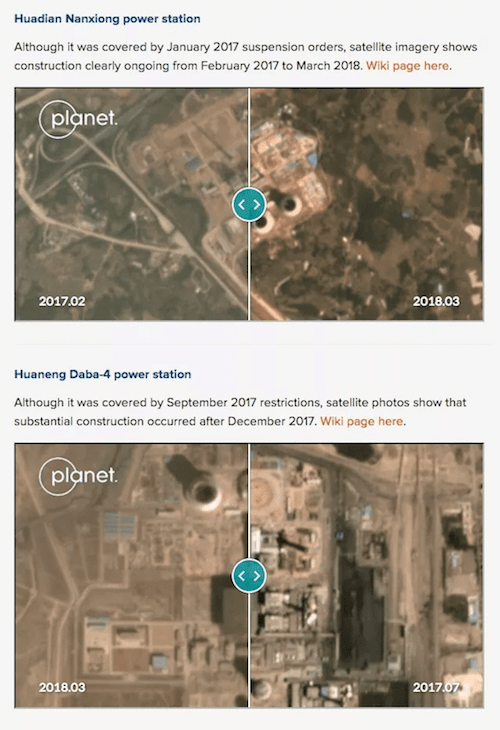 After a permitting surge between 2014 and 2016, the central government sought to slow down new station building, but satellite imagery has proven otherwise.

Rather than cancelling unneeded coal plants, provincial officials in many cases have merely slowed them down.

“The surge in new projects will overwhelm China’s own 1100 GW coal cap in the country’s current Five-Year Plan,” the report said, adding that cancelling the 259GW of new coal plants would free up $210bn, enough to build nearly 300GW of solar PV or 175 GW of wind power.

In other evidence, a Germany-based environmental group, Urgewald, published an update to its list that tracks coal expansion and found that if all the planned coal projects actually happen, they’ll add more than 579 gigawatts to the global grid.

In places like Bangladesh, Vietnam, and Indonesia, coal is often the most affordable option for energy. And as they pick up the supply chain from China, they will need more energy.

Total coal imports to Southeast Asia are expected to hit 127 million mt in 2019, up 27% from 2018, with demand driven by existing and upcoming coal-fired power plants.

I’m not against saving the planet. But I am for turning a profit. Find out how you can benefit from the current lie in the market: coal is dead.