The "Holy Grail" of Battery Technology

Producing electricity is one thing.

But storing that electricity is another.

Human beings have been trying to perfect the battery for centuries... maybe even longer.

Artifacts such as the Baghdad Battery may prove that man's quest to store electricity dates back millennia.

But the term “battery” itself (as we're using it here) actually dates back to Benjamin Franklin. In 1748, Franklin described multiple Leyden jars (a device that stores static electricity) by comparing them to a battery of cannons, referring to the weapons functioning together.

Since Franklin, many different minerals have been used as battery anodes and cathodes: lead, zinc, nickel, iron, copper... the list goes on.

But there is one very special mineral that's considered “the Holy Grail” for battery engineers.

You see, lithium has the lowest density of all metals, which gives it the greatest electrochemical potential and energy-to-weight ratio.

And that makes lithium the absolute best material for batteries.

Today, lithium batteries are used and produced more than ever. There are no doubt several around your house right now... in your cell phone, laptop, power tools, tablet, handheld gaming device — basically any consumer product with a battery that needs to be recharged has a lithium-ion battery.

But the demand for lithium-ion batteries is bigger than just consumer electronics.

The boom will continue thanks to electric cars and lithium-ion energy storage systems, like Tesla's huge Gigafactory lithium-ion battery facility, which by itself could soak up as much as 17% of existing lithium supply.

According to a new report from Navigant Research, lithium-ion batteries accounted for more than half of newly announced energy storage systems and more than 85% of deployed ESS power capacity in 2015.

Li-ion batteries are the most popular technology for the growing distributed energy storage system (DESS) and behind-the-meter (BTM) market segments. These systems accounted for an estimated 12.0% of new system capacity announced in 2015, the highest percentage of any year on record. While market activity picked up in a number of regions during 2015, North America remains the largest market for newly announced ESSs. An estimated 1,653.5 MW of new ESSs were announced worldwide in 2015, with around 33.8% of this new capacity coming from North America.

As a result, global lithium consumption has skyrocketed.

Global lithium consumption doubled between 2005 and 2015 and is only expected to continue rising.

Global demand is expect to double again by 2022. 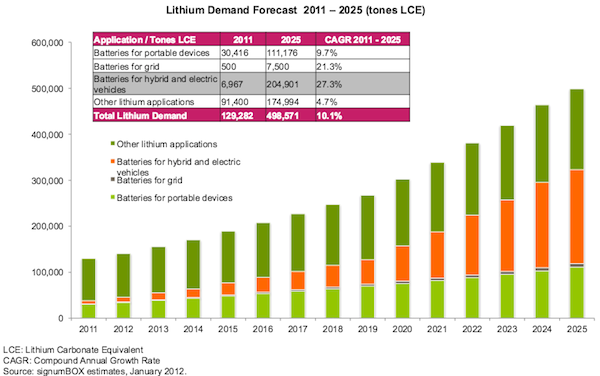 Truth is, the world needs energy more than anything else. Everything we use is powered by some form of it.

We just can't do without batteries. And there are massive opportunities in the lithium sector.

We've seen opportunities in the energy industry, like solar and geothermal, yield countless millionaires. And now we're seeing another revolution in stored energy with lithium.

Lithium is the new metal that will drive our power needs. And we'll be there to profit.

Don't Buy Ferrari... Yet
DeHaemer tells you when you should invest in the best brand in the world: Ferrari.
Is Tesla the New Ford?
Energy and Capital editor Keith Kohl answers the question of whether Tesla will become the new Ford.
Rockwood Expands Lithium Business in Chile
Energy and Capital editor Keith Kohl explains the new ventures being explored by Rockwood Lithium in Chile's Salar de Atacama.
First Tesla Powerwall Spotted in Wales
Energy and Capital editor Keith Kohl takes a look at where the UK's first Tesla Powerwall is located, and how the technology may now spread.
Hydrogen Fuel Cells: The Downfall of Tesla?
Lithium has been the front-runner in the battery technology market for years, but that is all coming to an end. Elon Musk is against them, but Jeff Bezos is investing heavily in them. Hydrogen Fuel Cells will turn the battery market upside down and we've discovered the tiny company that is going to make it happen.