The Holy Grail for Energy Investors

I don’t often get into a row with my readers.

Most of the time, we’re in lockstep together when it comes to the U.S. energy sector.

Together, we’ve uncovered the most lucrative energy investments simply by recognizing a situation long before it bears fruit.

I know my veteran readers will remember us discussing the potentially wild profits from tight oil resources in the lower 48 states years before the shale boom ignited in the Barnett and Bakken plays.

So when I found myself in a recent conversation over our future transition away from fossil fuels, I was shocked to learn that one reader wasn’t buying it.

"They’ve been saying that for decades,” he told me. He continued, “I’ll still be filling up my tank at the gas station around the corner for another 30 years… at least!”

To be fair, the world will still be using petroleum products well past 2050.

Looking at the EIA’s most recent Annual Energy Outlook 2021, the United States will still be using a massive amount of petroleum over the next few decades.

It certainly won’t experience the most growth — not by a long shot. However, petroleum products will easily remain our largest source of fuel through 2050. 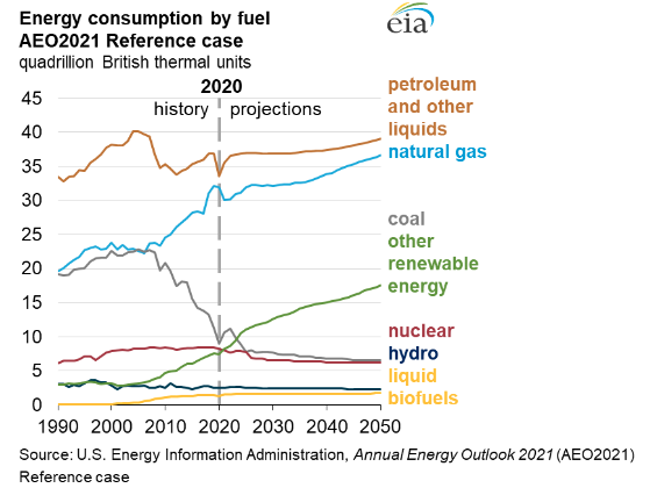 You see, what he failed to realize is that while our oil consumption isn’t abating anytime soon, there’s another shift in the U.S. energy paradigm well underway right now, and it’ll be complete sooner than you think.

The Holy Grail for Energy Investors

Mark my words, the holy grail for energy investors today is in electrical generation.

Yet I’m talking about more than the sheer growth in how much power we use down the road — I’m referring to WHERE we get that electrical power from.

It’s no secret that the coal industry has been dying over the last 15 years.

Clean or dirty, coal is dead.

It was a slow death, to be sure.

However, the deck was stacked against it. And nowhere else would the the impact be felt more than in the electric power sector.

In 2011, coal accounted for roughly 45% of U.S. power generation. At the time, natural gas’ share was less than 25%, and renewable energy made up just 5% of our electrical generation.

Oh, how the times have changed, dear reader.

Here’s a look at how that dynamic was last year: 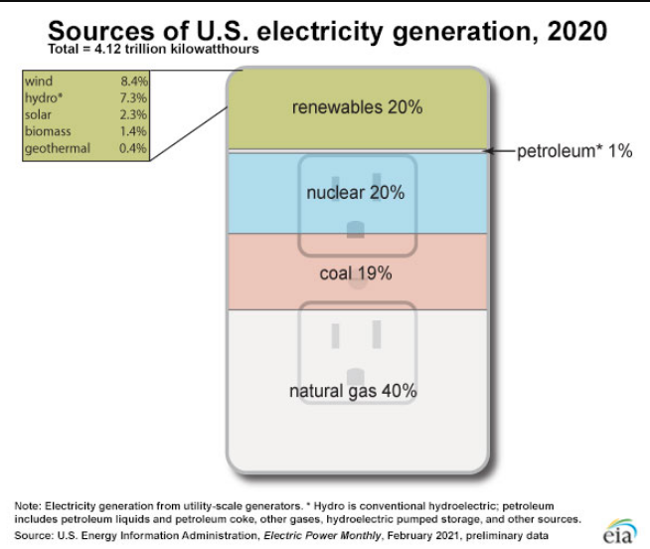 Not only have renewable sources — specifically solar and wind — greatly helped make up for declining coal power generation, but this gap will only grow from here on out.

The interesting part for us is that there doesn’t need to be any wild hype over renewable energy for that to occur.

Considering we’re not adding any new coal capacity right now means that by 2050, the average coal plant will be 70 years old!

Like I said before, the transition toward more natural gas, wind, and solar is well underway.

And the best part is this transition is about to accelerate under President Biden’s new plan.

Look, we discussed the implications of Biden’s $2 trillion proposal to radically transform our energy infrastructure, especially the aggressive push toward electric vehicles.

However, his goal of a carbon-free electrical grid is not forgotten.

Trust me, it's an upgrade that is long overdue.

So I can’t help but ask, “Have you prepared for THAT energy transition yet?”

Next week, we’ll delve a little deeper into one stock that stands to deliver a fortune to shareholders as Biden’s ambitious infrastructure plans roll out.