The Greatest Short Squeeze Ever Occurred in 1922

Right now, financial and social media are focused on the drama playing out on Wall Street. There’s a war going on between online “social justice warrior” day traders and professional hedge fund managers over GameStop stock.

Before this year, GameStop was best known for being a retailer next to Auntie Anne’s in dying malls.

It has a simple business model: Buy and sell video games.

However, with the advent of online gaming, GameStop has seen its sales decline year over year — and quite precipitously. In 2018, GameStop’s revenues were $9.2 billion. By the end of 2020, sales were $6.5 billion.

Analysts on the Street had dire predictions for it going forward.

So there was blood in the water. And Wall Street sharks began circling GameStop, shorting the hell out of it.

Now, you have to understand, on the respectability social scale, hedge fund managers — especially those who make fortunes off the misery of others — are regarded just one notch above a piano player at a whorehouse.

And that’s one of the reasons millennials and Gen Z day traders decided to battle hedge funds over the direction of GameStop’s stock.

Beginning just a few weeks ago, these day traders started buying up GameStop, driving up the price, and pissing off the “pros.”

The beginning of a legendary short squeeze had begun.

The media frenzy only added fuel to the fire. It was a true "David versus Goliath" fight in modern times. 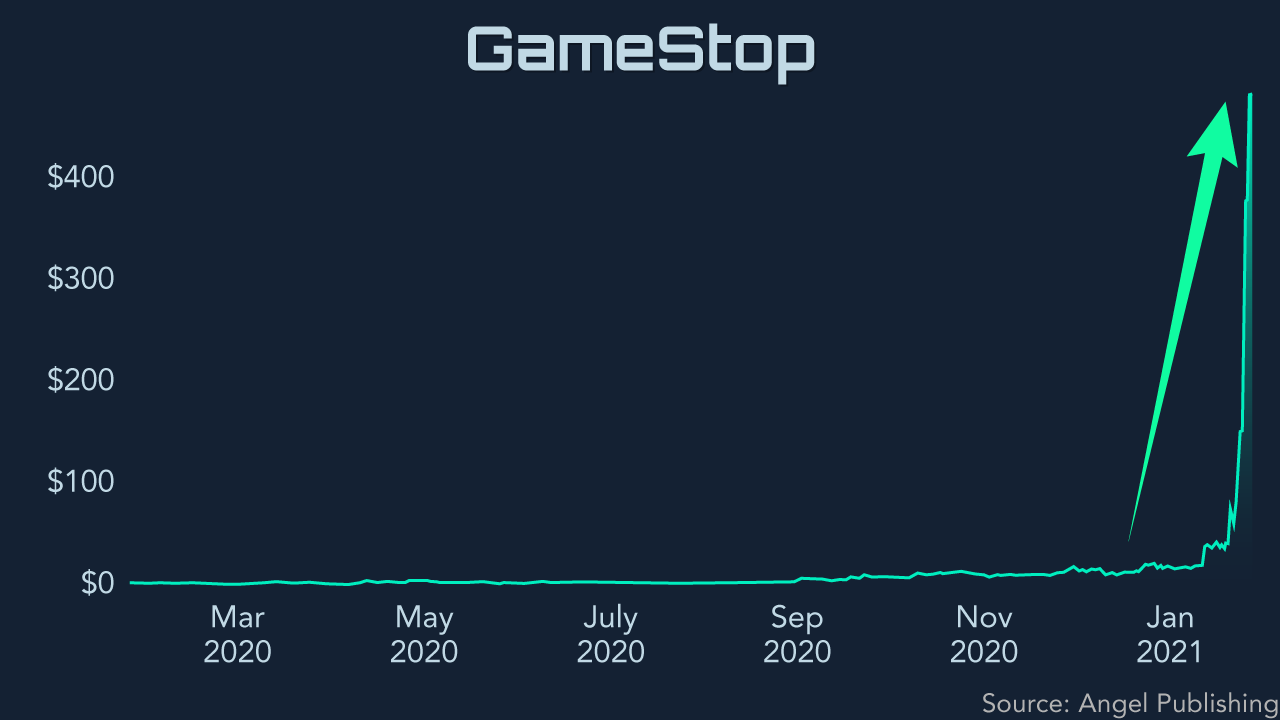 The drama is still playing out as you read this. How it ends, nobody knows. But I can guarantee it won’t be good for anybody.

Which brings me to this next story.

It happened almost exactly 100 years ago.

It’s regarded as the greatest short squeeze in history.

What you’re about to read is Nick Maggiuli's Twitter summarization of the original story from the book Business Adventures by John Brooks.

It all started in 1919 when a man by the name of Clarence Saunders invented the first modern supermarket — Piggly Wiggly stores.

Before this time, people had to go into a store, give the clerk a shopping list, and then wait for their items to be gathered and brought out.

Saunders changed all that when he created a retail self-service market where people could pick the items themselves and pay on the way out.

People loved the idea so much that within three years there were over 1,200 Piggly Wiggly stores in the U.S.

With this success, Saunders began licensing the Piggly Wiggly name out to other retailers.

Unfortunately, some of these retailers in the northeast began going out of business in the fall of 1922, all while using the Piggly Wiggly name.

Traders on Wall Street heard of these closings and decided that they had an opportunity on their hands.

They began shorting Piggly Wiggly while also spreading rumors that the parent corporation was in trouble.

When Clarence Saunders got word of these rumors, he got angry. Piggly Wiggly was doing fine, yet these traders on Wall Street were trying to ruin him.

As a result, Sanders publicly announced that he would “beat the Wall Street professionals at their own game.”

Sanders had never bought another stock before in his life, but he was determined to teach Wall Street a lesson.

Immediately Sanders took out a $10 million loan sourced from various banks, stuffed his suitcase and pockets full of cash, and boarded a train to New York City.

Upon arrival in New York, Sanders assembled a team of brokers, led by the famous Jesse L. Livermore to start a massive buying campaign.

Sanders was determined that he could corner the market.

As a quick aside, a corner is when an individual (or group of individuals) obtain enough shares of a company that they can essentially dictate the price.

Saunders wanted a corner so he could force the short sellers to pay him whatever price he wanted.

Remember, when someone goes short a stock, they borrow the shares. So if the price of the stock increases, the short seller would have to go to the open market and buy whatever shares are available in order to close out their position.

This is how a short squeeze works.

Well, with a corner it's even worse. The short seller goes to the open market and there is no one there to buy from except the cornerer. At this point, the cornerer can name their price.

This was Saunders' end goal.

Flush with cash and with only 200,000 Piggly Wiggly shares available for trading, Saunders began buying.

On the first day, he (and his secret group of traders) bought 30,000 shares. Within a week, Saunders owned 105,000 shares, or more than half of those available for trading.

By January 1923, Saunders’ plan was working and the price of Piggly Wiggly had risen above $60 a share.

However, Saunders knew that even if he won his corner, he would need an escape plan.

The problem with cornering the market occurs AFTER you have done it. Even if you squeeze the shorts dry, how do you get your money out?

If you try to sell all your shares at once, the price crashes and you are ruined.

But there was a catch…

In order to buy the shares, you had to do so via an installment plan that ended December 1923 (nine months later).

More importantly, you couldn't own the shares (and resell them) until the final payment was made.

Why did Saunders structure it this way? Because he needed to keep these shares off the market in the short term (to burn the shorts), but he also needed some assurance that he could cash out.

In doing the sale, he got both.

Unfortunately, just as the sale was being orchestrated, Saunders’ chief of staff, Jesse L. Livermore, quit after he worried that the corner wouldn’t succeed.

With Livermore gone, Saunders was truly alone against Wall Street

But what Livermore didn’t know was that Saunders was ready to pounce.

So on March 20, 1923, Clarence Saunders sprang his trap on the shorts — that morning he called for delivery of his Piggly Wiggly stock.

What happened next was one of the wilder days in Wall Street history. Piggly Wiggly opened at $75 and kept ripping upward. The shorts were forced to buy at $90, then $100, then $105.

Though the price was rising, there was very little volume in Piggly Wiggly because there was basically no one to buy from except Saunders.

The shorts were cornered and only had until the next day (Wednesday) to deliver their shares. But then, the rules changed.

The Governing Committee of the Exchange announced a suspension in Piggly Wiggly trading and an extension to the short sellers' delivery deadline.

Saunders countered and offered a deal of $150 a share for delivery by end of day Thursday and $250 a share thereafter.

Then the Governing Committee delivered the death blow to Saunders. They restricted trading of Piggly Wiggly and gave the short sellers until the next Monday to deliver the shares.

The extension granted by the Committee gave the shorts enough time to find other shareholders across the country (i.e., widows and orphans) who they could buy shares from.

Instead of getting paid in dollars, Saunders got the last thing he wanted — more Piggly Wiggly shares.

By the end of day Friday, most of the shorts had covered their positions and Saunders was left holding the bag while still $10 million in debt.

He had lost. Wall Street had won.

While the exchange was legally allowed to halt trading of Piggly Wiggly, scholars still debate whether the extension of the short seller deadline was within their rights.

In the aftermath, a wave of support grew for Saunders across the country. People were enamored with the man from Tennessee who took on Wall Street.

In the end, Saunders will go down as the man who pulled off “The Last Great Corner.”

So as you can see, nothing has changed. Wall Street wins.