The Great Russia-Saudi Oil Truce of 2016

Saudi Arabia is Doing the Unthinkable

I'll confess that I've given King Salman bin Abdulaziz Al Saud a hard time for having to buy friends.

But it's not as if it's only the current head of the ruling royal family of Saudi Arabia who is guilty of doing so.

After all, he was only the Minister of Defense in 2011 when we talked about the House of Saud bribing its citizens into complacency.

Ah... but it was a different time back then, dear reader, with crude oil trading between $80 and $115 per barrel. That year, Saudi crude generated roughly $324 billion — more than doubling the previous year's haul of $153 billion!

In other words, it was much easier to buy friends... and it only cost a cool $35 billion to placate the populace and prevent the Arab Spring from spreading into the Saudi Kingdom.

Despite oil prices plummeting more than 72% over the past 19 months, King Salman is determined to keep dishing out handouts and subsidies.

I'll give him one thing, though... he certainly is stubborn when it comes to change.

When that well dries up, it won't be pretty.

But just how desperate is King Salman for a little friendship these days? He's already alienated most of his OPEC brethren through his continued oil price war against North American drillers.

Well, he's been driven to do the unthinkable...

What would possibly cause someone to ask Putin to be your new best friend forever, you ask?

After taking such a hard-line stance against cutting OPEC's oil output, however, we're not expecting the Saudis to flip-flop suddenly (that would be too easy).

And as a testament to Saudi stubbornness, they're going with a much less desirable option: Russia.

At least, that was the story floating around yesterday. Alexander Novak, Russia's Energy Minister, told reporters that Saudi Arabia had proposed a 5% cut to help support low oil prices. Granted, the Russian Minister was also quick to point out that nothing was set in stone.

It was enough, however, to push crude prices 18% higher this week: 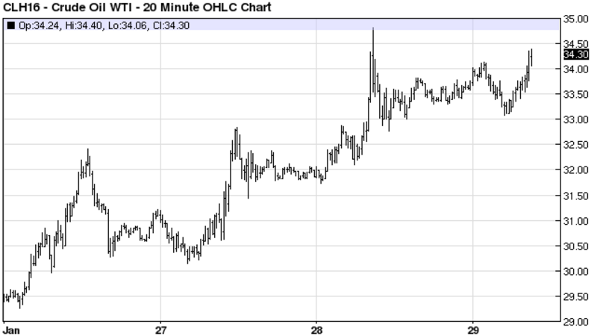 Although Putin has been quiet on the new friendship, he's certainly breathing a sigh of relief. Remember, the Russian government relies on oil revenue for roughly half of its budget. Soon after crude oil tumbled below $30 per barrel, the ruble hit record lows, yet rallied as rumor mills churned out hope of production cuts.

And yet there's only one thing for you and me to stay focused on...

The Other Best Way to Cash in on Crude

Here's a bit of advice: Take media headlines with a grain of salt, and focus on the fundamentals.

Look, the oil supply glut won't be resolved overnight, no matter how many sleepovers Putin and King Salman have in the coming months.

Last week, I mentioned that one of the best ways to cash in on the bottom of the oil market was through the major refiners; it should make sense that these multibillion-dollar corporations would perform well given their access to a cheap feedstock for their facilities.

Truth is, however, refining stocks aren't the only winners during an oil glut.

An estimated 100 million barrels of oil could be sitting in offshore in oil tankers. And it should be clear by now that that storage space is getting thinner by the day.

Those tanker stocks have performed well throughout the glut, too.

Over the last two years, and especially since oil prices started declining in the summer of 2014, plays like Teekay Tankers have returned triple-digit gains for their shareholders, and that's despite a harsh round of selling recently, too.

You and I both know that a 5% production cut by Russia and Saudi Arabia won't drive crude prices higher in the short term... and that's assuming they can even come to an agreement.

I'll keep you updated on this situation as it develops.

Buy the Bottom, or Get Out of the Way
Energy and Capital editor Keith Kohl shows investors how to make low oil prices work for their portfolios.
U.S. Shale Oil Goes Global
Energy and Capital editor Keith Kohl looks into the details behind the U.S.'s first crude oil export in decades.
The Oil Game
DeHaemer talks about the oil cycle, what new production means, and when it's time to call a bottom.
Hydrogen Fuel Cells: The Downfall of Tesla?
Lithium has been the front-runner in the battery technology market for years, but that is all coming to an end. Elon Musk is against them, but Jeff Bezos is investing heavily in them. Hydrogen Fuel Cells will turn the battery market upside down and we've discovered the tiny company that is going to make it happen.