The Great Oil Pump Is On!

The oil pump is on… again.

I know, I know, it’s the same old song and dance, isn’t it? How long have we gone without some astronomical oil price projection?

You understand my skepticism, don’t you? Remember, it hasn’t even been three months since Goldman Sachs raised the alarm over $200/bbl oil.

What was it the firm said? Well, according to Goldman's Chief Economist Jan Hatzius, oil prices would have to reach $200 per barrel to produce an income shock similar in magnitude to those that came prior to the 1974 and 1979 recessions.

Of course, if oil did surge to $200 a barrel this summer, the pain would be short-lived and ultimately lead to a crash to $50 per barrel by the time we rang in the new year.

When Goldman warned investors about $200 oil, WTI crude was trading for around $115 per barrel. Oddly enough, crude prices soon declined after that wild prediction, and the media quickly realized it was best to keep $200 oil out of their mouths.

Those were just warnings, right? Goldman’s official price projections called for oil hitting a peak of $125 per barrel.

Don’t worry, we weren’t expecting the firm to get it right.

At least this time around its analysts are calling for a much more realistic price.

Welcome to the Summer of Oil Profits

After we talked a little bit about oil’s price consolidation last week and more specifically about the technical breakout that just occurred, the fact that we’re staring at $120/bbl oil again is no surprise to anyone in our investment community.

And Goldman agrees with us this time. In a recent report, the firm revised its original $125 projection to $140. 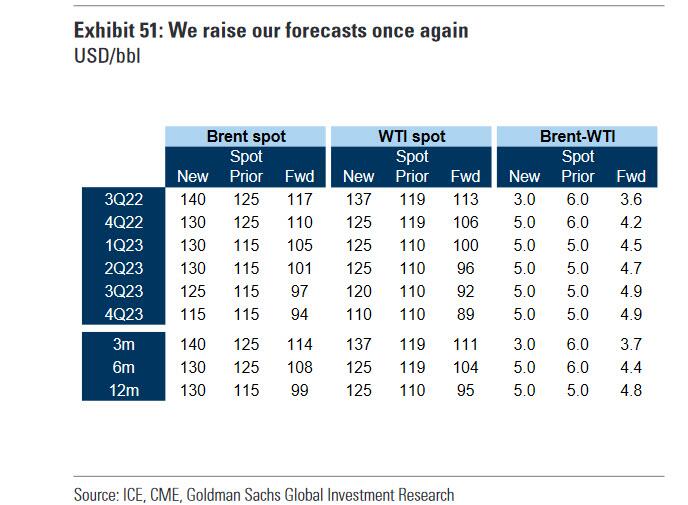 Actually, oil HAS to run that high.

Remember, the only thing that’s going to temper red-hot oil prices is demand destruction. Goldman believes oil prices would have to spike to $160 per barrel for that to occur.

It's not wrong insofar as $160/bbl oil would certainly put a lid on demand this summer.

As oil companies here in the U.S. steadily raise output to pre-COVID levels, more oil is going to flow through the market as drilling activity ramps up.

At this point, most investors are getting a little FOMO on oil prices. They were the ones who laughed us out of the room when we told them it was time to buy oil last year.

But the truth is it’s not too late at all.

The smart money is still very much in play, and I would hate to see my readers miss out on any more of our booming oil sector.

We’ve been waiting two years for the perfect storm to develop for summer oil profits. China reopening, strong U.S. gasoline demand, geopolitical chaos in Ukraine — all of these catalysts are reasons why oil prices could spike further.

More importantly, I don’t want you to wait until the peak this time.

That’s why I implore you to take a few minutes out of your day to check out my latest investment presentation. I’ve not only laid out why oil prices will remain elevated throughout the summer, but I also tell you exactly where the market will go to find new supply.

I’ll even give you three of my must-own oil stocks, each of which is closely tied to one of the most prolific oil fields in history.

But I can only show you the door — you’re the one who has to step through it.

You really have to see this one for yourself.