The Game of Bonds

The world's central banks are starting to lose control...

And they're getting desperate.

Simply put, the global banking system's answer to the 2007–2008 global financial disaster was to buy and sell a bunch of Treasuries and bonds (increasing money supply) to raise capital, which it gave to its member banks. The U.S. Federal Reserve alone has more than quadrupled M1 money supply since 2008.

The free money was intended to spur lending, which (hopefully) prompts economic growth.

But it turns out banks are greedy (big surprise, right?), and they simply sat on the money they were given instead of extending loans. So now the central banks need a new trick to get their member banks to lend money. And their most recent gimmick...

That means these 10-year German bonds will return less than they cost upon maturity, which is a deal most investors are not willing to make. But that's sort of the point.

Issuing bonds with negative interest rates is a brand new policy, first adopted by several small European central banks in 2014. Earlier this year, the Bank of Japan became the first major monetary institution to venture below zero. And now Germany joins the ranks.

But the game of bonds doesn't stop with negative rates...

Bloomberg reported that Ben Bernanke floated the idea of perpetual bonds last week to leaders in Japan. These would be bonds that never mature. That means buyers never get their money back. It's essentially a donation.

Negative interest rates and perpetual bonds are nothing more than this...

An act of desperation.

It's a signal that traditional policy options have failed. And new limits desperately need to be explored.

The world's central banks are struggling to avoid a financial collapse that has been inevitable for years and will require a bailout of epic proportions. The global markets didn't recover after the 2007–2008 global financial disaster. They were put on life support. And the next stock market crash could make 2008 look like a fender bender.

There are no moral victories here.

You have to win no matter what happens — or ending up on the wrong side of a closed door.

You've elected politicians to represent you. But they've only served to represent themselves and their billionaire campaign contributors. And at this point, the Federal Reserve and the corrupt politicians can’t save you next time — even if they wanted to.

It's time to represent yourself.

Take control of your own money. Own gold. 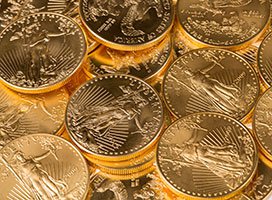 Gold is the only real global wealth-storage standard. You can go anywhere in the world, and everyone will recognize gold as money.

Current estimates suggest there are approximately 6.4 billion ounces of aboveground gold. And with 7.4 billion people on the planet, there's less than one ounce of gold available per person.

More gold will certainly continue to be mined today and in the future. But ultimately, there is no more gold being created. Whatever we have on Earth right now is it. Paper money can be created to infinity. There is no new gold falling from the sky.

I strongly urge you to own at least a little physical gold bullion today.