Few people know that the west side of 5th Street in Des Moines, Iowa, once held an incredible secret.

Beneath a simple jewelry store, a lone chemist by the name of William Morrison built his lab. He was attracted to the quiet, a place he could conduct his powerful experiments.

Don’t beat yourself up if you’ve never heard of him before.

Up until recently, I hadn’t either.

An immigrant from Scotland, Morrison was fascinated with the newfound possibilities of electricity, and electrical batteries in particular. He knew that in order to be successful, the storage battery had to be both light and portable.

His advancements in storage battery plates led to a battery that weighed far less and simultaneously had increased power.

Then, in 1890, Morrison decided to install his battery into a carriage.

Imagine tearing up the streets of Des Moines in this sucker: 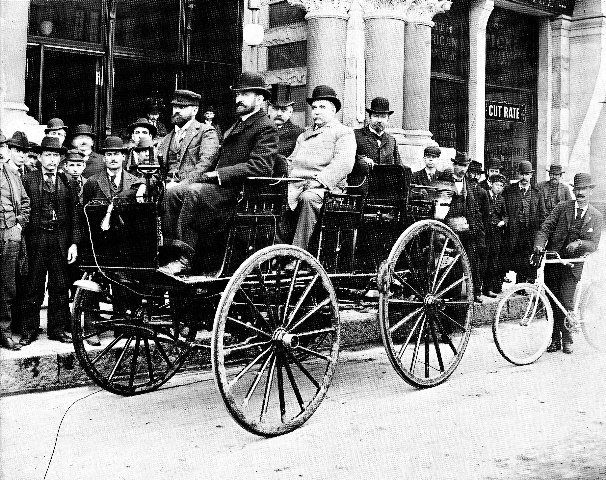 Remember, dear reader, this was a little over a decade before Ransom Olds churned out the first mass-produced car, the Curved Dash Runabout.

Morrison had to wait until early September to unveil his electric carriage during a parade.

Try to understand what it must’ve been like for the residents of Des Moines to see a “horseless carriage” being driven on the power of electricity.

A couple years prior, people were astounded by a rush of new technology due to electricity, from electric street lights to the electric railway that was constructed in Des Moines in 1888.

By 1891, a battery storage company in Chicago was churning out these new batteries.

As you might’ve guessed, the dawn of the oil age had arrived, and with it the internal combustion engine, which offered far greater travel distances than its electric competition.

Once men like Ransom Olds and Henry Ford came onto the scene with their mass-produced automobiles, electric cars took a backseat.

But, dear reader, it was only a matter of time before they came back into fashion.

In fact, this second electric vehicle revolution is already underway...

EV Revolution: In with the Old

The resurgence of EVs over the last decade can hardly be ignored.

To understand why they’ve gained so much traction, you need only glance at one chart: 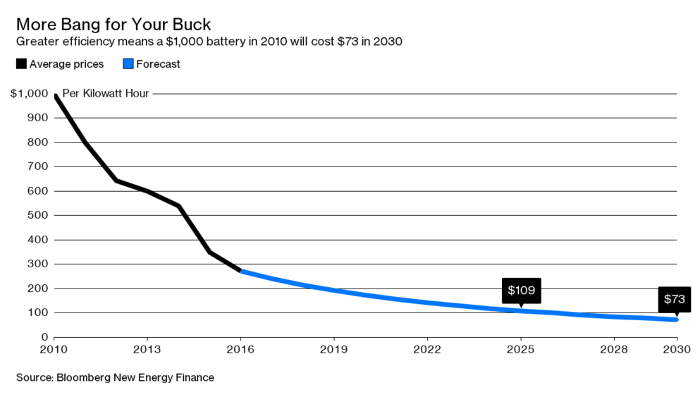 Battery technology has taken quite a few leaps and bounds since the days of Morrison tinkering in his lab below a jewelry store on 5th Street.

Thanks to lower costs and better efficiency, the EV market is exploding.

Just a few days ago, Ford announced plans to invest $11 billion in its electric lines, saying the company will have 40 hybrid and electric vehicles rolling off the assembly line within the next four years.

Together, the world’s automakers expect to pump more than $90 billion into developing electric vehicles.

I’m not talking about a fad here, but rather the tipping point for something much, much bigger.

The question now is how quickly the world will phase out traditional cars.

The real story, however, has never been whether this global transition would ever take place. As a non-renewable resource, it’s clear that the internal combustion engine was on a time clock.

You need to think bigger... and invest accordingly.

So what do you see?

For starters, EVs are coming on at a much faster pace than most believe... and they have a long way to go still.

Look beyond the car companies, and we’re learning that entire nations are rolling out plans to ban gasoline and diesel cars.

The real value is in the fuel of the future.

And yet it’s already here and staring us right in the face.

Later this week, keep an eye out for a very special report I’ve put together for you. I’ll not only show you how today’s billionaires are setting up their own position, but also why they’re at each other’s throats to secure this new fuel.

Because without it, they’ll be bankrupt within a year.