This New Shale Play Is Turning Heads. . . and Profits

If you're still waiting for oil and natural gas prices to reach July 2008 price levels before jumping back into your investing, you may want to rethink your strategy.

I'll confess that oil has garnered most of my attention lately. It was easy to get caught up after watching crude nearly break $54 per barrel this morning. Prices haven't been this high for more than five weeks. It also gives us more confidence that oil will be able to remain over $50 per barrel in the future.

But it's not crude oil that's on my mind.

Natural gas has also been on the rise after falling as low as $3.25 per Mcf last week. Prices are finally beginning to recover, trading over $3.60 per Mcf today. The gain today came after the Commerce Department announced that U.S. construction spending grew for the first time in six months.

Although I do believe we'll eventually return to those July price levels, we still won't see it for a few years.

For starters, we need to see good news for demand. According to the EIA's latest Short Term Energy Outlook, U.S. natural gas consumption is expected to decline by 1.8% this year, and remain flat throughout 2010. Specifically, demand in the industrial sector has to improve. The EIA is projecting industrial demand to fall by 7.4% in 2009. Natural gas makes up almost one-third of the consumption in that sector.

As a direct result of decreased demand, storage levels have remained well above the 5-year average. The EIA reported a working gas storage level of 1.823 Bcf as of April 24, 2009. That was an 82 Bcf increase over the previous week and approximately 464 Bcf higher than the same period last year.

Another problem in the short term is LNG. The EIA projects imports of LNG will grow to 480 Bcf in 2009, compared to the 353 Bcf imported last year. Many of you know I'm not holding much faith in liquefied natural gas. I believe the only way LNG will play a significant role in U.S. natural gas consumption is if domestic production goes down the drain.

That's simply not going to happen in the long run, and there's a good reason. . .

I have no doubt you've heard about some of North America's shale plays over the last year. In fact, those shale stories have dominated the natural gas markets in 2008. Whether it was the massive reserve estimate in the Haynesville or in the Marcellus formation that initially caught your eye, those shale plays are the reason I'm staying in natural gas.

Take last year, for example. While production in the Federal waters of the Gulf of Mexico fell sharply (roughly 14.8% in 2008) due to the hurricane season, production in unconventional fields grew nearly 10%. Unlike U.S. oil production, which peaked almost four decades ago, developing some of those shale plays has just begun.

One of the up-and-coming shale plays you're bound to hear more about in the future is the Eagle Ford Shale. Located in south Texas, the Eagle Ford Shale formation is found directly beneath the Austin Chalk Shale at depths between 4,000 and 10,000 feet.

The immediate response I get whenever I bring up a new play is, "It's impossible to make money in energy. . . especially right now."

As many of my readers are aware, that's certainly not the case.

Out of the few companies operating in the Eagle Ford Shale, one worth paying closer attention to is Petrohawk Energy (NYSE: HK).

Here's a look at how this company has been doing lately: 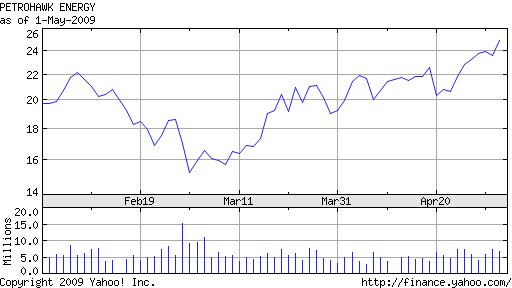 As you can see, shares of Petrohawk have jumped more than 66% since early March.

Although Petrohawk's Haynesville operations are enough to get me interested, today I'll focus on the 160,000 net acres in the Eagle Ford Shale.

During the first quarter, Petrohawk drilled and completed two wells. And based off their results so far, they've suggested the Eagle Ford Shale is one of the highest quality shale reservoirs in the U.S. Furthermore, Petrohawk has managed to reduce drilling and completion costs by approximately 60% since the first well. The company is putting approximately $50 million in capital expenditures into developing the Eagle Ford Shale in 2009.

P.S. As oil and gas prices are beaten down time and again during this recession, investors have been desperately trying to shelter their investments. However, there is one place that has become practically immune to this economic storm. And their latest recession-proof secret just got a whole lot more profitable. It's not too late to get a piece of the action as we take our second round of profits from this prolific new play. You simply have to see this. Click here to learn more.

Marcellus Shale
Energy and Capital editor Keith Kohl reveals which U.S. shale play may be much larger than previously believed.
Future of Natural Gas Prices
Energy and Capital Keith Kohl reveals to readers why the U.S. is headed toward a crunch in natural gas supply.
How To Invest in Natural Gas
Energy and Capital editor Chris Nelder sees an air pocket forming in future natural gas supply just like the one he anticipated in oil, suggesting that it's time to buy gas.
Hydrogen Fuel Cells: The Downfall of Tesla?
Lithium has been the front-runner in the battery technology market for years, but that is all coming to an end. Elon Musk is against them, but Jeff Bezos is investing heavily in them. Hydrogen Fuel Cells will turn the battery market upside down and we've discovered the tiny company that is going to make it happen.