Time Waits for No Fool

Back in the late 1990s, you'd see lots of research from Rand or the Forrester Group that would claim that a gazillion people would be on the Internet or cell phones or use AOL within a decade.

These arguments in many ways were akin to the old rationale on China, which was, “If product X would just get 1% of China market share, it would be a zillion-dollar company.”

I remember joking with other investment analysts regarding these high-growth stories. They were all the same and seemed a bit surreal. And yet they all came true. Everyone has a cell phone and is on the Internet, which they use to shop, work, and socialize.

Think about the fact that Facebook just announced that it has 1.04 billion daily users. That's one-seventh of the total human population. It is a staggering number. Instead of making inroads in China, imagine getting a market share of 1% of Facebook's list.

The rapid growth of technology adoption can and does change the world. At the same time, it creates vast fortunes for those lucky enough to buy the right stock. Here are a few samples of adoption rates in the United States over the past 100 years: 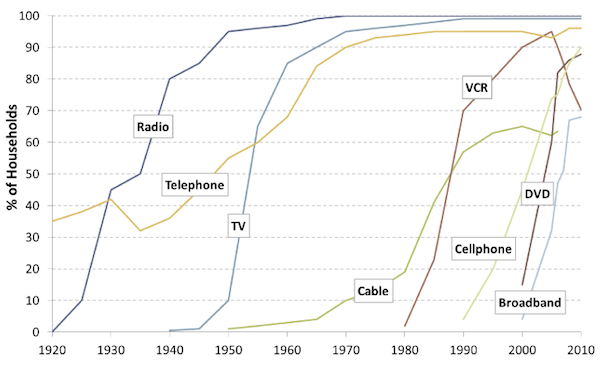 The TV, cell phone, VCR, and broadband went from zero to above 60% in no time. They just launched once that last technological barrier was overcome.

If you bought companies like RCA, GE, AT&T, Sony, Google, or Amazon (to name just a few) at the right time, you would have made millions.

The same type of adoption rate will happen with driverless cars. One day you will drive; five or 10 years later, you won't. It will happen faster than you know. And you will think, Huh, I should have bought that driverless sensor company back in 2016.

You read stories every day about new driverless inroads. Today's headline is:

“Driverless bus trial in Netherlands is first on public roads”

A bus without a steering wheel or pedals shuttled people around at 8 mph. It was the first time a vehicle without a driver operated on a public road. It is called the WePod, and a fleet will be out in the next few years.

Technology is one thing. Other impediments are laws and regulations. And those barriers are falling as well.

A California lawmaker has introduced a bill that would legalize autonomous vehicles without human drivers for the first time in the U.S.

According to the Guardian:

Assemblywoman Susan Bonilla wants to change California’s rules so that GoMentum Station, a testing ground for autonomous vehicles located in her district near San Francisco, can test completely driverless vehicles on public roads.

The bill, AB1592, would permit self-driving cars “not equipped with a steering wheel, a brake pedal, an accelerator, or an operator inside the vehicle”. However, only GoMentum Station would be allowed to conduct the pilot tests, and the trials would be limited to a specific business park and top speeds of 35mph.

California law currently requires all autonomous vehicles on public roads to have a human safety driver and manual backup controls.

GoMentum Station wants the rule change so that it can publicly test two driverless EZ10 shuttle buses made by French company EasyMile.

EasyMile is similar to the WePod, though it travels up to 25 mph.

This law will fly in the face of a new regulation put out by the California Department of Motor Vehicles just last month. The DMV wants to forbid driverless vehicles for safety reasons.

If the fight fails in the Golden State, there are plenty of lawmakers in Texas, Florida, and elsewhere that would love to have the next tech revolution happen in their state.

I've put together a free report on three stocks you want to own now for the early adoption of driverless cars. Click here to view it now.

Time, and markets, wait for no man.