Up until now, one of the most egregious examples of wasted natural gas within the United States took place during the Indiana gas boom of the 1880s.

Fittingly, the center of this boom-and-bust tale revolved around a town called Gas City.

It all started when a group of coal miners accidentally struck a pocket of natural gas. Although the hole was plugged and abandoned, it was reopened several years later and led to the discovery of the Trenton Gas Field.

In fact, my veteran readers can take things a step further and describe what this monumental waste of gas looked like in full detail: 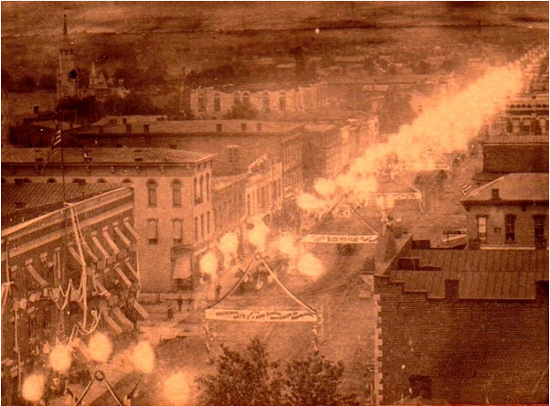 What you see above are the incredible flambeau light displays that lined the town's main street. The wealth of natural gas held underground caused the town's population to swell more than 16,500% in just two years!

Of course, you can probably guess what happened next...

Within two decades, the town successfully wasted approximately 90% of its natural gas resource.

And at the expense of pouring salt on this old wound, it's also important to note that oil production from the area quickly dissipated; the problem was that the field's pressure declined to the point that it was impossible to pump this crude oil to the surface.

Now, you would expect us to learn from our mistakes, right?

Unfortunately, several states haven't... and nowhere else is this waste more visible today than in the second-largest oil producer in the country: North Dakota.

And every last one of us knows how profitable these situations can be for early investors.

Before we get to the dirty secret behind the Peace Garden State's natural gas crisis, let's first take a look at the problem.

Simply put, flaring occurs when natural gas is burned off at the wellhead. Even though this practice is actually more environmentally friendly than releasing this natural gas resource into the atmosphere, one can't help but wonder what would motivate an operator to do it.

There's really only one answer here: It's due to the lack of pipeline infrastructure. With that said, the current low-price environment for natural gas doesn't help matters, either. Drillers in the Bakken would rather burn it off at the wellhead than curtail production — a decision that certainly attracts the ire of more than one landowner.

Keep in mind, however, that it isn't just in North Dakota that companies are getting the itch to flare their natural gas.

Wyoming, for example, flared $11 million worth of natural gas — or 3.9 billion cubic feet — during the first 10 months of last year.

In the now-famous Eagle Ford Shale in South Texas, companies burned nearly 20 billion cubic feet of natural gas during the first half of 2014. If you're keeping tabs, that comes out to a cool $100 million worth of gas.

But as I've been hinting at today, natural gas is becoming a full-blown crisis for North Dakota.

The last time we talked about North Dakota's flaring problem, perhaps the most notable takeaway was the sheer value of the gas being burned off. We're talking about a mind-boggling $1.2 billion every year!

I know operators in the Bakken have made strides recently to reduce the amount of gas flared, but the dirty secret behind this flaring madness is that without the severe decline in oil prices over the last nine months, it would have been business as usual.

As it stands now, roughly one-third of North Dakota's natural gas production is being flared.

You can bet that's going to change going forward.

In fact, there's one company my readers and I have unearthed that still has a huge upside to the Bakken's flaring crisis.

Not only does it have a major presence in the play, but this stock stands to make a fortune no matter how stringent North Dakota's upcoming regulations are for producers.

I recommend setting aside a few minutes today and checking out the full details behind this investment for yourself.