The Dirty Little Secret in the U.S. Oil Patch

To cut or not to cut, that is the question.

Your answer may tell you a little bit about yourself, too. Are you a "glass half-full" type of person? Or maybe you fall on the doom-and-gloom side?

Make no mistake, the market is optimistic.

Barring additional meetings, this could be the last time for Russia and Saudi Arabia to shake hands until the next official OPEC meeting.

Things didn’t work out so well last time when Russia abruptly left the table in dramatic fashion by pledging to increase production.

But there’s something different this time around.

Gone are the faux handshakes with their feet. This time, the meeting will take place via video conference, with one special guest in attendance.

Oh, to be a fly on the wall in that meeting.

Well, it turns out we are.

To Cut or to Not Cut

That makes sense, considering billions of investment dollars are on the line, and I wouldn’t expect much movement until we see a definitive decision on a course of action.

To give you a little more perspective on how analysts are weighing the outcome of this meeting, Rystad Energy hailed it as the only hope on the horizon for the market.

In other words, everyone plays nice on Friday or else we’re in for some extreme pain down the road. And to think, things could get much worse than the 70% price collapse that we saw during the first quarter of 2020.

So where does everyone stand?

There’s no question in my mind that all parties want to cut oil output.

Yet nobody wants to look the fool and be the only one to do it.

For Russia, any thought of curbing production is impossible unless the U.S. is involved. Remember, U.S. domestic production has been steady around 13 million barrels per day all year.

Now, I mentioned our fly on the wall at this emergency OPEC+ meeting a week ago.

Don’t be too concerned if you’ve never heard of Ryan Sitton, a commissioner at the Texas Railroad Commission. I have a feeling that a lot of investors are hearing his name for the first time.

Commissioner Sitton could be the one joining OPEC+’s video conference later this week.

Last Thursday, he took a call with Russia’s minister of energy. Not surprisingly, they agreed that a little cooperation was in order.

The numbers floating around were similar to what Trump mentioned at his presser — between 10 to 15 million barrels per day.

I’m sure the Saudis will be just as agreeable when it comes to informal calls like this. When they’re sitting around a table staring each other down… that’ll be a different story altogether.

So is this just a matter of all talk and no action?

The Dirty Little Secret in the U.S. Oil Patch

The dirty little secret in the U.S. oil patch is that the RRC doesn’t have to force companies to curb production in the Permian Basin.

Perhaps it’s not as much of a secret for most investors, more a bit of common sense.

The bitter truth pill here is that the RRC won’t have to curtail Texas production because production will ultimately decline no matter what they decide. In fact, global output is heading much, much lower.

For starters, global spending by E&P companies is projected to decrease by as much as $100 billion this year, or nearly 20% lower than they spent in 2019: 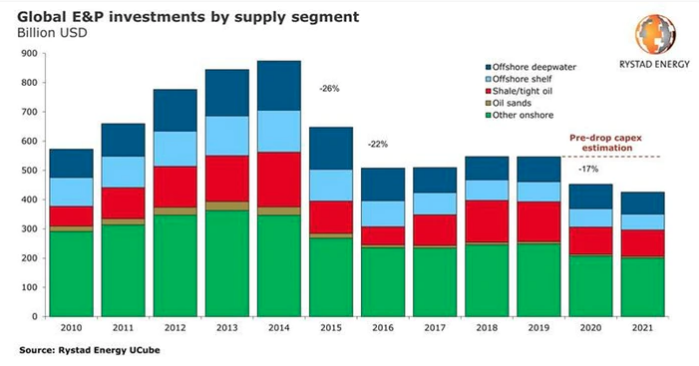 For the record, that’s the lowest amount of money that companies have spent in more than a decade.

Forget the logistics of Texas forcing its producers to shut down production, we don’t need a plummeting rig count to know that Permian output is going to experience a heavy drop.

There’s another factor at play, too.

Let’s play the optimist and say that Texas, OPEC, and Russia all agree to cut production by 10 million barrels per day.

The market STILL won’t be balanced.

The demand destruction taking place from the COVID-19 pandemic has brought the world’s economy to a grinding halt.

Some estimate that global consumption will fall by as much as 30 million barrels per day.

If this ominous prediction becomes reality, more than one billion barrels of crude will need to be stored somewhere within the month.

I recently shared one way you can successfully trade the bottom of the barrel.

If any of the parties at the emergency OPEC+ meeting balk this time around, those storage and tanker stocks will become even more valuable for shareholders.