The Demonetising Effect: A Cashless Society

ALERT: Ignore Trump and politics. Central banks are using the U.S. election as a smoke screen.

And you didn't even notice.

But using the U.S. election as a diversion, the world's central banks just moved one step closer to achieving its goal of creating a cashless society.

At the height of the election drama Tuesday night, the Reserve Bank of India issued a surprise order that demonetized 500- and 1,000-rupee notes — making the country's largest bills now virtually illegal to use. This will effectively remove 80% of the physical rupees in circulation.

And the announcement of this surprise demonetization was no doubt purposefully meant to coincide with the U.S. presidential election, which was certainly going to be a huge distraction despite the winner.

Now think about what this surprise demonetization means to the Indian people for a minute...

Now, people can still deposit the discontinued notes in banks and post office savings accounts until the end of the year and receive the full value. But the 500 and 1,000 notes are nevertheless discontinued, making them technically obsolete as currency. And after the end of the year, people won't be able to exchange them for digital currency.

As you can imagine, the currency ban caused a two-day mad scramble with hundreds of people standing in line at banks and in front of single ATM machines in some places. 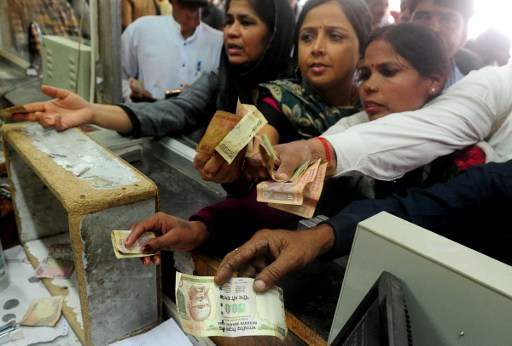 So what was the point? And can this happen in the U.S.?

Well, the stated goal for the Reserve Bank of India is only a part of its larger goals. But in short, the Indian central bank is simply seeking more control over the value of the rupee in order to stem the systematic effects of the ongoing currency war that has been waging among Asian central banks for nearly two decades.

And a system of digitized wealth saving simply gives it way more control over the value of the rupee than a system of physical currency.

Physical paper currencies get spread all around the world, making it difficult to determine local money supplies. They're way more easily hidden. The cost of production is almost infinitely higher. And they can be counterfeited. A system of digitized currency is ideal for the central banks right now simply because it gives them much more ability to control the value of their currencies.

Now, you might think the central banks would want control over their currency to always increase its value. But that's not the case.

Following the Asian Financial Crisis of 1997, the Asian central banks began to competitively devalue their currencies in order to promote their country's trade balance. And if you find that confusing, you're not alone...

But in short, central banks can help increase their country's exports by devaluating their currencies against others. This increases the purchasing power of foreign buyers — meaning foreign buyers can buy more exports for less.

However, this also means imports become more expensive because the purchasing power of the local currency is weakened against other foreign currencies — meaning importers have to spend more for less.

And it also works the other way around...

Central banks can help lower the cost of imports by increasing the value of their currencies, which decreases foreign purchasing power. But that also means exports could decrease.

Ultimately, central banks really want to control the value of their currency in both directions to meet market conditions.

Sometimes they want to increase the value of their currencies; sometimes they want to decrease them. And it works all well and good with a balance. However, when one or more countries find themselves in desperate need of fixing their trade deficit (like today), this tinkering can lead to an all-out currency war where central banks competitively devalue their currencies to boost trade conditions.

A currency war basically works the same as a price war. It's the repeated competitive cutting of prices below competitors. For some industries, like the airline industry, a price war can only drive prices down so far. But in the literal “moneymaking” business, a price war can lead some currencies to oblivion.

The surprise move by the Reserve Bank of India will give it more power in competitively devaluating the rupee as a way to strengthen the local economy. But, of course, this devaluation will come with a significant cost to the current rupee holders.

So will the U.S. get involved in this currency war? Will the government ever issue a similar ban on $50 and $100 notes (our largest bills) in order to allow the Federal Reserve to gain more control over the U.S. dollar, as well as in order to compete against devaluating policies like negative interest rates?

Well, unfortunately, the U.S. is already involved, whether we like it or not. In our globalized economies, all countries are affected by their neighbors, near and far.

And believe it or not, the conditions are actually already primed for such a move to phase out physical supplies of the dollar...

Phasing out physical cash, and beginning with the largest notes, is an idea that comes directly from a book recently published in August called The Curse of Cash by Kenneth Rogoff.

Rogoff himself is among the most influential financial academics in the world. He served as an economist with the IMF and was on the Board of Governors of the Federal Reserve. Today he is the Thomas D. Cabot Professor of Public Policy and Professor of Economics at Harvard and a member of the Group of Thirty, which is one of the most powerful international finance bodies in the world. So even if you don't agree with his views, it's important to know his perspective.

In short, The Curse of Cash argues that phasing out physical U.S. dollars (starting with $50 and $100 bills) would generally provide a two-fold benefit:

Rogoff doesn't hide the fact that he works for the central banks. Nor is he ashamed to be a globalist. So he is quite unpopular among some. But, again, even if you don't agree with Rogoff, it's important to know his bigger picture of the world.

And, of course, you can already see how the central banks and governments will convince their citizens that phasing out physical cash is a legitimate pursuit...

The message will be: “Physical cash users are criminals.”

And that's exactly how the Indian government is selling it to its citizens...

India's Prime Minister Narendra Modi called the ban on the bills a “surgical strike” on crime and corruption. And all headlines on the ban focus on the discouraging of crime, calling the now demonetized notes “black money.”

So, considering the freedoms that Americans have sacrificed in the name of safety from terrorism, is it not within the realm of possibility to imagine a similar confiscation of physical cash here in the United States being accepted as well?

At first, I believe other central banks will continue to promote the idea that physical cash users are criminals in a continuing effort to move to a digitized system to gain greater control over the value of their currencies. Up next is most likely China or Japan.

In the U.S., I think phasing out physical cash will be a more difficult proposal to sell to the public. Cash is virtually the essence of freedom to many (most?) Americans. And even though we've sacrificed many freedoms, including various privacy freedoms, there would certainly be a severe, immediate backlash from Americans against the idea of phasing out physical dollars. There are some who see a cashless society even representing dark forces.

Either way, I do believe this could end a larger, long-term pursuit to ultimately move towards a cashless society. And if the entire rest of the world goes cashless, there will be little reason for the U.S. not to adopt a similar system.

Whether a cashless system would be a good thing or a bad thing is ultimately undetermined. However, in the intermediary, I believe these final pushes toward a more cashless world is going to play a critical role in revaluing hard assets like gold and other precious metals significantly higher.

Own gold and other precious metals today.