The Calm Before the Storm: 2 Reasons Oil Will Rise (Spoiler: It’s NOT Because of Putin)

All is well; nothing to see here, folks.

Again, all is well.

Don’t worry, the “all is well” narrative will continue spilling out of the White House until the midterms are behind us.

And yet the disconnect from reality in this narrative is creating one hell of an investment storm ahead for us.

Look closely, and you’ll find one of the few win-win trades long before the investment herd realizes what’s going on.

The Perfect Investment Storm Is Brewing for Oil This Winter

Before we go any further, dispel from your mind the belief that Russia is to blame for high oil prices.

I know it’s difficult, believe me. I’d love to do nothing more than make Putin a scapegoat for the supply/demand deficits that are coming.

It’s too easy to fall for that trap.

Sure, the sanctions levied on Russia’s oil industry have led to some of its customers cutting ties, namely the United States and South Korea.

However, the truth is that there’s just as much Russian oil on the market today as a year ago, and the only difference is where it winds up. 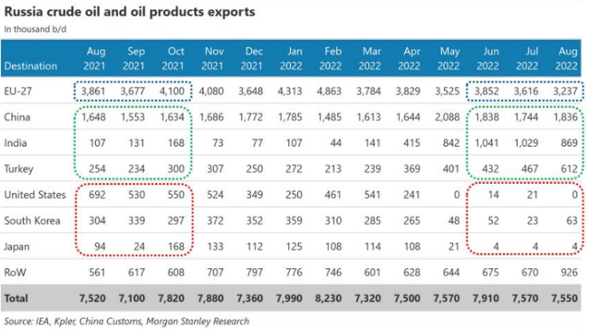 It turns out that China, India, and Turkey are more than happy to pick up a few hundred thousand barrels of crude per day… at a nice discount too.

So what exactly IS there to be bullish on?

Well, for that, we’ll have to peel back the veil masking what’s really going on.

For starters, the historic, 180-million-barrel release from the SPR over the course of six months has deluded investors into a safe sense of supply security.

All you have to do is take a look at the EIA’s latest petroleum report, which showed a weekly build of 2.4 million barrels in the U.S.' commercial oil inventories.

Interestingly (or perhaps not, depending on how you look at it), that build coincided with a release of around 8 million barrels from the SPR.

Think about that for a minute.

Biden’s SPR release is the ONLY REASON we were able to see a build in inventory.

As if that weren’t enough, keep in mind that U.S. gasoline inventories fell by 1.8 million barrels per day, suggesting that post-summer demand may still be lingering.

Now here’s the catch: What happens in November when the SPR sales end?

There’s absolutely no incentive for President Biden to keep that oil flowing after the midterm elections. Not only is it a political land mine for him personally, but the SPR was simply never intended to be used this way.

And to give you an idea of how much oil we’re talking about, the SPR — selling oil at a rate of 1 million barrels per day — would be the world’s 20th-largest oil producer if it were its own country, and right up there with India, Oman, and the United Kingdom.

This bullish catalyst for oil may line up with a second one: the reopening of China.

After months of severe COVID lockdowns, is China finally ready to make a comeback?

Right now, the city of Chengdu is starting to loosen its lockdown restrictions, and if China truly is ready to open up again, we’re going to see global demand jump significantly.

For a little perspective, there are twice as many people in Chengdu as there are in New York City!

But like I hinted at earlier, there is a win-win oil investment you should be taking advantage of.

You see, investors in this basket of oil stocks will be rewarded no matter which direction prices move!

But enough of the hype — let me show you right here.