The Boom and Bust of U.S. Oil Investing

There are two sides to the story behind the U.S. oil renaissance — and unfortunately, I can almost guarantee you're only hearing one.

Go ahead and ask around...

The promise of energy independence is woven inside political rhetoric and regurgitated by the mainstream media.

You'll be spoon-fed statistics designed to lift the spirit and mask any concerns.

The problem, however, is what they're not telling you...

It's no secret my readers and I share a pessimistic outlook for California and Alaska's future oil production.

But it's the latter state that may be on the verge of collapse.

Last September, the Energy Information Administration hinted at the potential disaster in store for Alaska's oil industry. As you know, the state depends the North Slope for over 97% of its production.

In turn, companies operating in the North Slope rely on the Trans-Alaska Pipeline System (TAPS) to bring that oil to market.

Let's not overstate how vital this industry is to the state: It supports well over 100,000 jobs and accounts for roughly 89% of the state's unrestricted revenue, approximately $6 billion.

Right now, the TAPS is flowing at less than one-third of its maximum capacity.

If production falls below 350,000 bbls/day, Alaska might have to shut it down altogether.

We're not talking about something that "might" take place decades down the road; Alaska's crude output in 2012 fell below 400,000 bbls/day for the first time in decades.

So far, state production has declined about 74% off its peak of two million bbls/day in 1988.

And it's going to herd investors in just one direction.

Once production from the North Slope inevitably falls below that breaking point of 350,000 bbls/day, ramping up production in the Bakken will become even more critical.

Believe me; you don't want to bet on the horse with the broken leg — which is why Big Oil is spending billions for their stake in the shale boom. As usual, they're all late to the party. Considering North Dakota's production hit 747,000 bbls per day in October, it's safe to say the Bakken has become a household name.

Most investors will end up losing money trying to play it safe with Big Oil. Personally, I prefer to look ahead...

While North Dakota continues pushing to break that one-million-barrels-per-day production benchmark, you can bank on two developments taking place over the next several years.

The fact that they're barely keeping pace with burgeoning production has added tremendous value to a select few investments addressing the crisis — and even caused one billionaire investor to spend a small fortune to grease the political cogs to put his company in a win-win situation.

He's not alone. Individual investors like us have the opportunity to make the exact same profits...

After witnessing the $34 billion bribe Warren Buffet paid for his Bakken profits, my colleague Jeff Siegel and his readers pressed their advantage with his two latest Bakken stocks.

Of course, the other hidden gem in this oil boom is the real Bakken underdog: Montana.

I mentioned recently that the companies targeting the Bakken Formation would soon spread beyond North Dakota's borders. Today there's absolutely no question that activity is heading west.

Back before North Dakota stole the spotlight, Montana held one of the largest onshore oil fields in the lower 48 states.

In fact, the number of drilling rigs — all of which are currently drilling for oil — has nearly doubled during the past twelve months.

For me, choosing between the North Slope and the Bakken is a no-brainer.

Pitting ConocoPhillips, one of Alaska's largest oil producers, against a major Bakken player like Continental Resources, I'll let you decide which investment you'd prefer for your own portfolio: 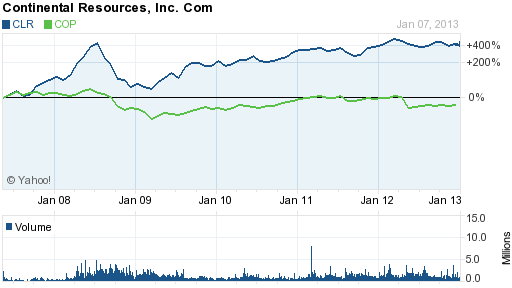 As I said, it's going to get much better going forward.

During 2006, when the Elm Coulee field helped push state production past 100,000 bbls/day, the Montana Board of Oil & Gas Conservation issued roughly 278 oil permits. Last year, that number swelled to a record 392.

We can be sure 2013 will be a good year for these operators in the Bakken...