The Biggest Bubble in History Will Crush the World Economy

It's the biggest bubble in history — a $9 trillion Ponzi scheme. It’s multiple bubbles wrapped in a big bubble, and it all has to do with a little-known financial creation called WMPs.

You probably have never heard of WMPs — I hadn’t either until I starting digging into China’s historical lending problem. And it’s bad...

Data compiled by the China Securities Regulatory Commission show that assets in WMPs amounted to about 80% of China’s gross domestic product. But first let me give you a little background... 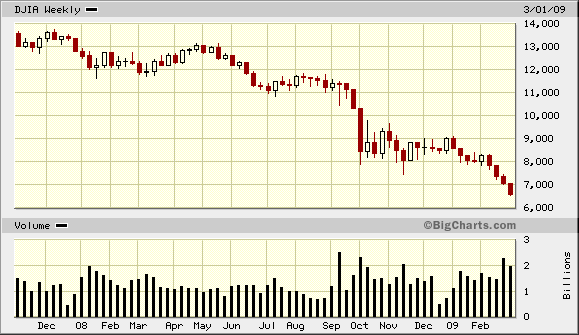 In the course of two years, people who had $1 million in their bank account all of a sudden had $450,000. The total market loss was $16.4 trillion. But the horror didn’t stop at a delayed retirement. Many people were fired, lost their houses, got divorced, lost their kids, and some even committed suicide. Forbes puts the number of suicides related to the 2009 financial meltdown at over 10,000.

But it doesn't stop there. The IMF called the subprime meltdown a virus because it infected every market in the world.

Here is how the IMF describes the Collateralized Debt Obligations (CDO) that stemmed from the housing bubble in the United States:

The process of transforming home loans into securities (in which the income and principal payments are passed, through a trust, to investors) added problems. Whereas all pass-through, mortgage-backed-securities (MBSs) issued by the U.S. government–sponsored enterprises (GSEs)— Fannie Mae and Freddie Mac—have common underwriting standards, the MBSs issued by the major Wall Street firms had varying loan standards. This made the costs of understanding disclosed information, and the premium on maintaining confidence, much higher. Due diligence from investors did not increase enough to compensate for this greater information burden.

In other words, the financial geniuses on Wall Street figured that only 3% of mortgage holders — mom and pop — ever default. They could bundle all these mortgages, wrap them in convoluted Wall Street lingo, and sell them to pension managers as a safe way to get a high rate of return.

Everyone was in on it. The banks sold Wall Street the bundled debt (CDOs). The guys selling mortgages invested new and easier ways to get them — no interest loans, ninja loans, liar loans.  Realtors pushed houses with fake appraisals. The government backed it all through Freddie and Fannie with ridiculous ideas of social engineering and developer kickbacks. And the homebuyers bought homes they couldn't afford and then used their equity as an ATM.

OK, it's a familiar story. The problem is we didn’t learn from it.

As I write this, the biggest housing bubble in the history of the world is simultaneously happening in Canada and Australia. The average price for detached houses sold in Greater Vancouver reached a record of $1,830,956 in May, up 5% from the same month in 2016. Condos were up 15%. This despite a 15% foreign homebuyer tax installed last year. Toronto is similar. In Sydney, beach house prices jumped 37% over the last year.

This all has to do with hot money leaving China.  China is ramping up the bubble just as we saw on Wall Street 10 years ago. Only instead of calling them CDOs, they call them WMPs.

This is how it is concocted. The average Chinese citizen walks into a bank with a deposit. The bank gives them two options: Number one, they can put it in savings and get 1.4% or something small. Number two, they can put it in a WMP, which pays a 7% dividend.

They do the latter. These WMPs are then loaned to high-flying real estate developers and unprofitable state-owned enterprises (SOEs) — many of these are the same people, as well as members of the ruling party.

The problem comes when they can no longer pay their debts. When the citizen can’t afford a house and then decides to sell the WMP, all hell will break loose.

At this juncture, the market is relying on the constant increase in real estate prices to fund its obligations as well as government backing in the form of easy credit and a possible bailout.

Using new money to pay early investors is the definition of a Ponzi scheme.

Savers have poured $9 trillion into WMPs and similar products on the assumption that they’ll get bailed out if the investments sour. Even after news in February that policy makers are drafting rules to make it clear that state guarantees don’t exist, Yang is undaunted. She says she’ll only withdraw money from WMPs in the unlikely event that they start to suffer losses.

“Cracking down on implicit guarantees is just like curbing home prices,” she says. “It’s something that the government needs to say, but it’s not something they will eventually do.” 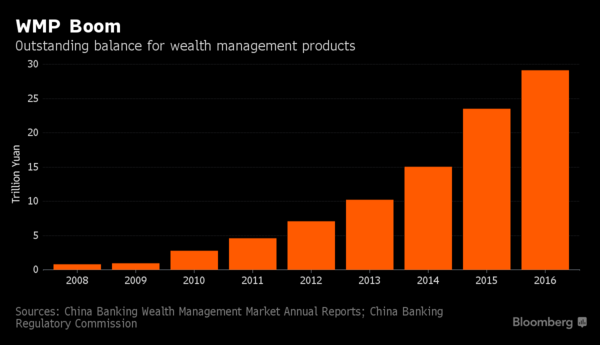 If you remember, investors thought that U.S. mortgage sellers Fannie and Freddie had implicit backing from the government. They didn’t, and their share prices lost 99% of their value.

The End is Nigh

Last week, Moody’s downgraded China — from A1 to Aa3. This is the first downgrade since 1989. You may remember that year from the guy who stood in front of a tank in Tiananmen Square.

Furthermore, manufacturing contracted this quarter, GDP is down to 6.5%, and Chinese debt is 250% of GDP and rising uncontrollably. Corporate debt is now 166% of GDP.

Investors are lemmings. The small Chinese WMP investor is no different. When the tipping point is reached and there is no more bad money to chase worse money, the market will crash, bringing the rest of the world with it.

I’ll tell you more about that next week.