The Best Way to Profit from Oil Sands Investing

The Next Generation of Oil Sands

There's a wave of Canadian crude on the horizon, so be ready.

Last week, I merely skimmed the surface of U.S. oil imports. In a nutshell, it's no surprise where we're going for our future barrels of crude.

Unlike our southern neighbor — whose oil industry is on its deathbed — Canada is the obvious choice.

After all, when was the last time you heard of someone — anyone, for that matter — begging our politicians for more Saudi oil? (That is, besides the Saudis...)

It's as clear as day. And yet, this flood of Canadian oil will make a lot traders very jealous, because they're going to miss the window of opportunity opening right now.

A flood of Canadian oil

Before I get back into Alberta's oil sands, it's important for you to see this Canadian oil boom for yourself.

Remember when I told you that our Canadian oil and oil products imports reached an all-time high of 2.73 million barrels in July?

It's a growing trend that's been gaining steam for more than thirty years... Take a look for yourself:

And if things continue to go the way they have been, we're in for even more Canadian crude flowing our way.

According to the report, 357 units were operating across Western Canada. That's compared to the 183 working at this time in 2009.

Drilling always accelerates in the fall and winter seasons in Canada, when the ground is frozen. So not only is drilling activity picking up; it's about to get crazy — especially now that oil prices are steadily trading between $70 and $85 per barrel.

Now I know what some of you are thinking: Why Western Canada?

The reason is simple enough. Stretched across 540,000 square miles — from Southwestern Manitoba to Northeastern British Columbia — the Western Canadian Sedimentary Basin (WCSB) contains one of the world's largest reserves of oil and natural gas.

Even though the basin is a mature area for exploration, it's an absolute powerhouse for Canada...

And located in the WCSB is one of the best upcoming investments in Canadian energy.

There's a reason why I only brought up the surface mining aspect of oil sands production last Thursday.

Just out of curiosity, how many of you have actually seen those surface mining operations leave?

I don't mean after a quick search on Google — that's taking the easy way out.

I can still remember how staggering an experience it was to fly over several of the Athabasca mining operations a few years ago. Believe me, dear reader, the immensity hits immediately — especially from an aerial view. The sheer size of it is almost unbelievable.

Keep in mind, however, that 80% of the recoverable bitumen is too deep to be mined, which leads us to where the oil sands industry is headed.

You see, technology is reaching a point where surface mining the bitumen will quickly become a relic of the past. And this time, companies are playing for all the marbles.

When it comes to extracting the bitumen using from the ground, it's all about heat.

The problem is that bitumen is extremely thick, very much like cold molasses. I'm talking about heavy, viscous material.

To give you an idea of how viscous the bitumen is at room temperature, take a quick look at the pitch drop experiment.

The experiment started in 1927 to show that some substances that appear to be solid are actually highly viscous liquids. To give you the basic idea, here's what it looks like: 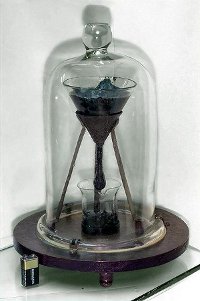 It took years for a single drop to form.

I've seen this firsthand, and believe me, it's not an exaggeration.

So if the bitumen is too thick to pump out, how can in-situ methods work?

Perhaps the most popular in-situ methods is that Steam Assisted Gravity Drainage (SAGD) and THAI process.

Under the SAGD recovery method, two horizontal wells are drilled — one right above the other — into the reservoir. The upper well injects steam, which may or may not be mixed with solvents, which heats the bitumen.

The heated bitumen can then be pumped out through the lower well.

The entire process is becoming more efficient, too. The SAGD process can produce up to 80% of the oil in place.

According to Suncor Energy (NYSE: SU) — one of the largest producers in the Athabasca oil sands — more than 90% of the water during the in-situ operation can be recycled, which means the companies are drawing less water from the Athabasca River.

Another one of my favorite SAGD plays is Connacher Oil and Gas (TSE: CLL). Back in July, we took a closer look at Connacher's recent activity at the company's Great Divide project. Connacher operates two SAGD plants in the Great Divide region, as well as conventional plays in both Alberta and Saskatchewan.

Even though the SAGD is the most popular, it certainly isn't the only option making headlines...

Called the Toe to Heel Air Injection (THAI) process, it's being developed by Petrobank (TSE: PBG). The entire process involves drilling a vertical and horizontal wall into the formation. The company then creates a combustion zone, moving it toward the production well. The bitumen is upgraded underground and pumped out.

Although it is still in the process of being commercialized, the advantages are worth the effort.

Less greenhouse emissions, virtually no fresh water use, and the lower operating/capital costs are just icing on the cake.

P.S. Opportunities like this don't come very often, but when my colleague Nick Hodge told me about this nuclear story being buried by the mainstream media, it blew my mind. Feel free to check the special video report that could potentially make you 100 times your money. I suggest watching this video as soon as you can... Once the rest of the investment herd catches wind of this, it'll be too late.