The Best Energy Explorer Does it Again

For the past seven or eight years, the worst performing market in the world has been oil. The great shale revolution turned the United States into the world’s largest oil producer, employed hundreds of thousands of people, transformed the highways into SUV rage tracks, but did nothing for oil stocks.

Explorers, producers, blue chips, and wildcatters couldn’t catch a bid. Back in the day, if a little-known international oil company hit a 100 million barrel mother lode, the stock would double on the news.

The Irish company hit big in its Jethro-1 well 100 miles off the coast of Guyana. The company found more than the 100 million barrels it had estimated. Shares jumped 20% on the news.

That’s not a double, but it is a nice reaction to the first major oil find by Tullow since 2012.

“This substantial and high value oil discovery in Guyana is an outcome of the significant technical and commercial focus which has underpinned the reset of our exploration portfolio,” Tullow CEO Paul McDade stated. “It is an excellent start to our drilling campaign in the highly prolific Guyana oil province.”

Drilled by the Stena Forth drillship to a total depth of 14,436 feet (4,400 meters) in approximately 4,429 feet (1,350 meters) of water, Jethro-1 significantly de-risks other Tertiary-age prospects on the Orinduik license, stated Tullow, which owns a 60-percent interest in the block.

The next catalyst will be when Tullow spuds the shallower Upper Tertiary Joe prospect after operations conclude at Jethro-1. Tullow stated the Carapa 1 well will be drilled later this year on the adjacent Kanuku license to test the Cretaceous oil play. 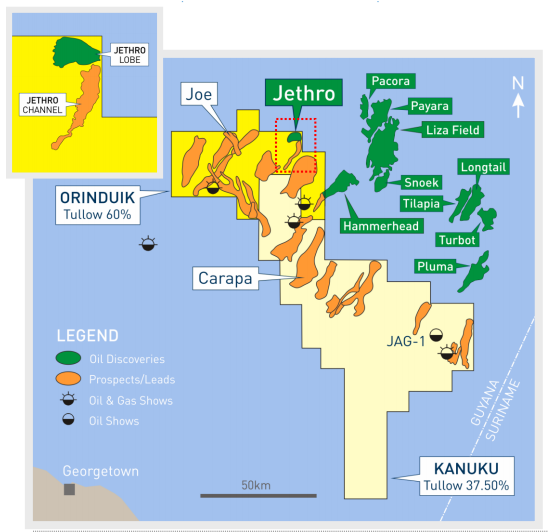 I’ve made a lot of money for readers over the years by trading Tullow Oil.

As you can see by this 20-year chart, Tullow’s share price did a moon shot after it discovered a massive oil play in East Africa in the mid-2000s. The share price went from around 70 pence to 1,350 pence.

A falling oil price based on abundant production in the U.S. coupled with political problems in Kenya forced the share price down 95%, where it has been building support ever since.

For the past seven years, the company has been cutting costs and reducing debt. It currently has a market cap of $3.67 billion and debt of $4.7 billion, which isn’t a bad ratio for an exploration company.

Debt continues to go down, and gearing was reduced to $2.9 billion and 1.8x with no near-term debt maturities. The first half saw 2019 CAPEX of $248 million.

In addition to the three wells in Guyana, the company has new exploration acreage accessed in Argentina, Peru, and Namibia.

The Future Is Out There

No one knows what the future will bring, but we do know Tullow is one of the best companies at finding big oil deposits in hard-to-reach places. Over the past seven years, it has relentlessly cut debt and shaved costs — so much so that it has started putting money back into exploration.

I am probably too early in recommending Tullow as a buy (though it seems like a nice short-term gambit on the next well). If it gets another positive hit and the Permian Basin slows down like I keep reading about, then three to five years out, you could be up 1,000%.

That's a lot of ifs, but it would be worth buying a small amount just to keep it on your watch list.