The Beginning of the End for Oil?

Strange things are afoot at the EIA.

Just a month ago, things had hit a feverish pitch for oil prices, and WTI crude soared to over $120 per barrel — a price level not seen since oil surged higher after Russia rolled its tanks into Ukraine.

If you’re like me, you probably breathed a little sigh of relief lately as gas prices finally started coming down as crude oil lost momentum in recent weeks, sliding back below $100 per barrel for the first time in months.

But now comes the crucial question for every investor: Where is oil headed from here?

Well, I have some good and bad news for you, both of which will help you in this volatile market.

The Beginning of the End for Oil’s Bull Run?

My veteran readers are well aware that there is just ONE thing that can truly push oil prices lower — demand destruction.

I know the excuses are out there. It’s neither some brutal Putin gas tax nor Biden’s inability to kick-start drilling on federal lands.

So long as there’s strong demand, prices will remain in heartbreaking territory.

Take a quick look below and tell me if you notice anything unusual: 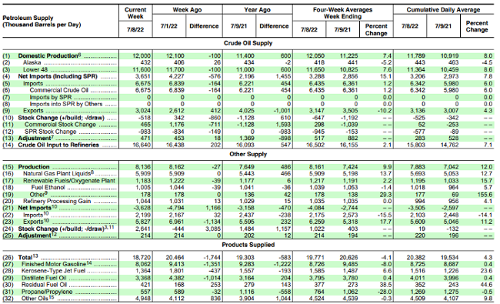 No, it’s not the fact that domestic production declined by 100,000 barrels over the previous week.

For the record, demand for petroleum products during the week of July Fourth hasn’t been this low in about 26 years!

Now, there are plenty of reasons why oil prices would be correcting.

The monster inflation report that came out recently showed that the Consumer Price Index, a solid measure of the everyday cost of living, jumped 9.1% in June.

Dig a little deeper, and you’ll see that it was exorbitantly high energy prices that have driven inflation higher over the last year. In the Labor Department’s report, it showed that the energy index has risen 41.6% over the last 12 months, with gasoline of all types increasing by 98.5% during the same period.

That demand, however, isn’t going to carry on too much longer, especially with the end of the summer driving season approaching.

If you’re looking for another culprit for why crude prices crashed below $100 per barrel, take another look at the chart above, and you’ll see that we released nearly 1 million barrels per day from the Strategic Petroleum Reserve (SPR) last week.

As we talked about before, one of the few things the Biden administration can do to directly affect crude supply is tap into the SPR.

Throw all these factors together, and you can understand why someone might be bearish on oil over the long term.

But before you start dismissing oil altogether, I think we’re going to see crude prices rally at least one more time before the legs of this bull give out.

You see, I’m not entirely convinced that demand destruction has officially set in.

And that unusually sharp drop in gasoline demand you can see above is a more normal phenomenon that the investment herd understands.

That makes the harsh sell-off in oil stocks ripe for a rebound.

If we see a demand move back into a normal range, a move higher for prices isn’t too far out of the picture.

In other words, there’s a window of opportunity right now for the right oil plays. Fortunately, my readers and I already nailed down three must-own oil stocks before the bear market sets in.

If you’re like us, you’ll want to check out this investment report and let me show you all the details firsthand.