Is It Time to Buy an Electric Car?

“I'm spending a fortune on gas,” he told me after throwing back his second glass of some very powerful eggnog.

My cousin, who owns a small HVAC company just outside of Richmond, drives 110 miles round-trip six days a week.

He used to live closer to his office, but he decided to move out to the country in 2006. And while his house and adjoining 12 acres are blanketed with peace and quiet, his daily commute is one that I wouldn't wish on anyone.

And of course, any time gas prices head north, he feels it. But these days, it's a little worse.

His business has been struggling for the past couple of years. He's still profitable, but he's not pulling in the kind of scratch he saw before the recession took hold.

He had to lay off some staff and he's putting in more time at the office.

His dream of early retirement is on hold for now.

So I was surprised when he told me he wanted to get an electric car...

Now is Not the Time

My cousin is a smart guy.

He started his own business when he was 22 years old. He had one used truck, a lot of borrowed equipment, and no desire to work for anyone but himself.

At 25, he landed his first major job for a commercial developer. He reluctantly took on some debt and hired a few people.

By the time he was 28, he had a small fleet of trucks and more than 20 full-time employees.

He's a self-made man who pays for pretty much everything in cash. And he definitely didn't need a loan when he bought his $480,000 home.

So I couldn't understand why he would want to buy an electric car to get to and from work every day.

He's read all the data, and knows that unless he goes for a high-end Tesla Roadster (which I know he doesn't like because it's too low to the ground for him), there is currently no electric car on the market that can give him an all-electric range of 110 miles.

He could go for a Chevy Volt, which would give him about 35 to 40 miles in all-electric mode before it starts running on gas...

But he wants all-electric. Said he's tired of spending his money on an addiction that makes our nation weak.

In any event, I told him not to buy an electric car right now, because it simply could not provide the all-electric range he requires for his daily commuting.

Now if you're a regular reader of these pages, you know I'm not typically one to dissuade anyone from getting an electric car.

But the bottom line is that right now, if you're not one of the more than 70 percent of the daily commuters that drive less than 40 miles per day...

An electric car is not for you.

(According to the Bureau of Transportation Statistics, more than 70 percent of U.S. commuters drive 40 miles per day or less.)

Of course, next year, that won't be the case.

After confronting the reality of today's electric offerings, my cousin agreed that now is not the time for him to get an electric car. 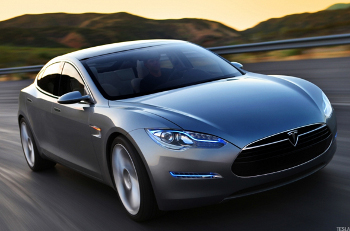 But come next year, he may be first in line for a Tesla (NASDAQ: TSLA) Model S.

Expected to hit the streets in mid-2012, The Tesla Model S can get him from 0 to 60 in 5.6 seconds, reach a top speed of 125 mph, and allow him to travel about 150 miles on a single charge — more than enough for his daily commute.

This car, however, will cost him about $50k.

His current car, a Toyota Avalon, ran him only $31k when he bought it.

That's a $19,000 difference in price. Certainly nothing to brush off.

If gas prices average out the same price over the next eight years (which you know is nothing more than wishful thinking), he will spend $28,800 on gas.

Of course, you still have to fill up an electric car, too — just with domestically-produced electrons instead of 87 octane.

We looked at my cousin's cost per kWh, and figured it would cost him about $10,500 for battery charges over the course of eight years.

That brings the total cost on the Model S to about $60,500 for eight years of operation.

He's definitely not going to save a ton of money buying the Model S, but he's also not swayed. For him, the convenience of “filling up” while he sleeps — and the ability to hedge against oil spikes — is well worth it.

Of course, he's also quite wealthy, so dropping $50k on a car isn't a big deal for him.

But for most folks in this country, $50k is a lot of money. And a lot more than most are willing to spend on a vehicle.

That being said, I did come across a very interesting Deloitte report earlier this year which indicated that at $5.00 a gallon, most Americans would be willing to buy an electric car.

So will there be even more interest in electric cars at that price?

Certainly the major automakers are betting on it.

Every major automaker today either has an electric car on the road, in production, or in development.

And although Tesla isn't considered a “major” automaker, there have already been 6,500 preorders for the Model S.

One analyst at Pacific Crest Securities noted he expects 13,000 Model S preorders by the end of the first half of 2012.

He also believes the stock could touch $42 a share within the next year.

I don't know if either will happen. But I do know that the Silicon Valley agitator has sold more than 2,000 of its $110,000 Roadster, and it will likely sell out completely next year when it sells the last of a limited 2,500-unit run.

Not bad for a little startup that started selling a six-figure electric car during one of the worst economic meltdowns in history...

Bottom line: Tesla's not really a company I would bet against.