Two weeks ago, Hurricane Patricia came out of nowhere and threatened the west coast of Mexico.

As soon as I heard about it, I put out an action alert to my Options Trading Pit readers.

Here is what I wrote:

A hurricane stronger than Katrina in 2005 and Andrew in 1992 is poised to hit Mexico’s biggest ports and holiday resorts within hours.

Hurricane Patricia, the strongest ever recorded in the Western Hemisphere, is forecast to go ashore between Puerto Vallarta and Manzanillo on Friday, with winds as high as 205 miles per hour. That's a Category 5 storm.

This storm will be a killer and will knock out power in Mexico and Texas for weeks.

The storm is heading for the beach resort Puerto Vallarta and Manzanillo, the nation’s busiest container port.

This storm looks like a nightmare. A Category 5 storm can destroy buildings, and the storm surge that follows will shut down the electrical grid for weeks. Furthermore, the rain deluge will hit Mexico and eastern Texas from San Antonio to Houston and as far north as Dallas.

Meteorologists are predicting 8 to 10 inches of rain in areas that had not seen rain in a long time.

One company that sees its share price go up after a storm of this nature is Generac (NYSE: GNRC). Generac makes generators.

Generac is the only pure play on generators.

It turns out that the storm turned at the last minute and the damage was minimal to Mexico, but it increased the flooding in Texas and pushed up the demand for generators.

The chart popped both due to technicals and the storm catalyst. 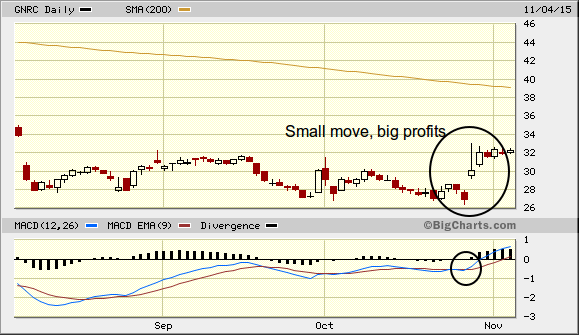 The stock price only moved about $4. But the option price moved as much as 270%.

One week later, we took profits:

The Power of Options

Options are a simple way to increase the power of your money. You peddle in 21st gear instead of first.

Granted, you don't want to be in 21st gear when you are going up a big hill — but every tool has its purpose.

An option gives you the right, but not the obligation, to buy (call) or sell (put) a security at an agreed-upon price before a certain date.

Call options are a bet the price of a stock will go up.

Put options are a bet the price of a stock will go down.

For example, if you thought Facebook (NASDAQ: FB) was going to have a blowout quarter today (and it did — it is up 6% as I write this)...

This would give you the option of selling Facebook shares before November 6th at $109.00. If you bought yesterday, you would have made 90% overnight. Not bad on a 6% move in the underlying stock.