But perhaps the biggest sea change is that ExxonMobil — the largest company in the world in 2012 — has been replaced by Tesla in the S&P 500.

A more apples-to-apples comparison would be this five-year chart comparing NextEra Energy with ExxonMobil. 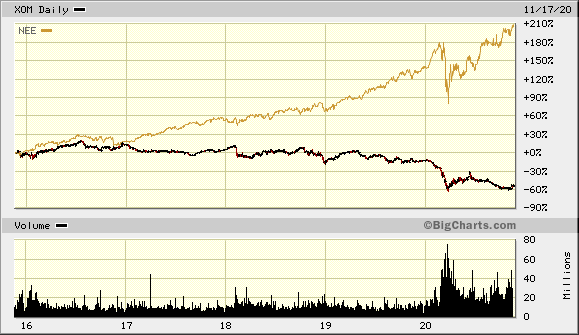 NextEra is a Florida-based utility that has a focus on renewable energy.

It’s all part of the Joe Biden gravy train. The last time a Democrat was elected president, solar stocks went ballistic. It will be the same again now. Biden is calling for zero carbon emission from the power grid by 2035.

You may remember Al Gore's investments from 2009. The former vice president saw his net worth increase from $2 million to $100 million as then-President Obama spent $90 billion in government money on 11 green energy companies.

In an amazing coincidence, Al Gore happened to be an early investor in nine of 11 of these companies, according to The Washington Post.

But I’m not here to bash the constant and unrelenting stream of corrupt politicians. No, I’m here to profit alongside them.

Here at Energy and Capital we’ve had a long and successful history of investing in green energy.

My good friend and associate, Jeff Siegel, has been following and investing in green energy for 25 years. His track record is outstanding. He made 1,174.34% gains on Aphria, 2,015.63% gains on Canopy Growth, and a 70.82% profit on Vivint Solar.

When he sees a new trend, I pay attention. And after telling me that solar stocks were dead for the last seven years, he is now telling me it is time to buy. Solar is about to power higher.

According to Forbes, the U.S. solar industry has deployed over 2 million solar photovoltaic (PV) systems with a capacity of 71,300 megawatts, and this number is expected to double within the next five years. The U.S. Bureau of Labor Statistics estimates solar PV installers will be the fastest-growing job through 2028.

But back to Jeff… We were on a Zoom call yesterday and he was telling me about this solar company that is using a spray coating to generate electricity from glass windows.

If you think about it, skyscrapers are nothing more than giant solar collection devices. And this $4 company Jeff was telling me about has a technology called "liquid electricity" that can be applied to rigid glass or plastic in ultra-thin layers. Boom, instant skyscraper photovoltaic device.

The company just hired an executive from SoftBank and is getting ready for its Asian build-out. With Biden in the White House and the green-energy gravy train just getting started, this company won’t be $4 for long. Click here now — this is one opportunity you don't want to miss.