In 20 years of researching, investing, writing, and talking about gold, there's one question I've been asked more than any other...

I'm not sure if that's exactly irony. But... it's something. 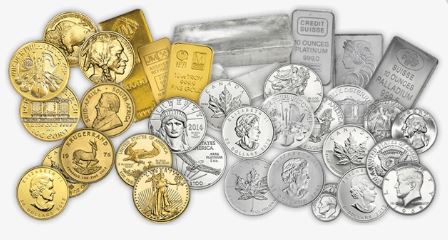 Nevertheless, it makes sense that in talking about gold, people would ask about silver. Gold and silver are certainly related. And silver is priced much lower than gold — meaning a potentially more interesting opportunity for much bigger investment gains. Who doesn't want to make more money, right?

But here's what they don't know...

Silver isn't exactly what most people think it is. And misconceptions about silver might lead to confusion for investors later on.

Right now, the price of silver is surging. At last look, silver for August delivery was trading at $23 an ounce — up almost 20% in five days.

The main reason for the surge is simply that silver is following gold. Gold prices are nearing all-time highs, and investors are seeking a cheaper alternative.

We believe that, with momentum, the price of silver is very likely still headed higher from here. But it's important to understand silver before using it as an alternative to gold.

Silver is probably the most misunderstood of the four precious metals. For the most part, people understand gold. Your average Joe generally understands gold as a store of wealth and/or a money metal — or at least a metal that was once used as money. And he'd be correct.

And, again, for the most part, people generally don't care enough about platinum or palladium to begin to understand them. Platinum and palladium are mostly used by the auto industry to manufacture catalytic converters — pretty dull stuff.

But then there's silver.

Silver is mostly known as the precious metal second to gold. Gold is first place. Silver is second, right?

And most people would tell you silver is second to gold because gold is rarer than silver.

But all that's only sort of true.

Silver is second to gold in some aspects, but not all. To compare gold and silver is to compare apples and oranges — though not exactly as the idiom implies. Apples and oranges can be compared: They're both fruits. In the same way, gold and silver can be compared: They're both precious metals. The thing is... one is more "precious" than the other.

Gold and silver are similar, but they are not equal. Just looking at the two metals would tell you that.

Aside from the obvious though, gold and silver have different physical properties. For example, gold will never oxidize –– aka rust. Silver, on the other hand, will turn black with oxidation over time.

Gold is also much rarer than silver. Some estimates put silver at over 60 times more abundant than gold in the Earth's crust.

For investors considering precious metals, however, the most important difference between gold and silver is end-use demand.

We can generally divide demand for gold and silver into two broad categories. Demand for the precious metals comes from consumers and investors seeking to use it as an alternative to fiat currency in some way. But demand for the same metals also comes from a variety of industrial sectors.

The balance of demand for precious metals as a monetary vehicle and for industrial use is quite different between gold and silver. And that makes the two metals actually quite different.

Over 90% of total gold demand comes from the jewelry industry or from investors (either from retail consumers, institutional investors, or central banks). Why lump those two together? Because both investors and jewelry consumers are really buying gold for the same fundamental reason: as an alternative to fiat currency.

The short of it here is about nine out of every 10 ounces of gold is held as a monetary asset, including jewelry. Here's how gold's end use breaks down. 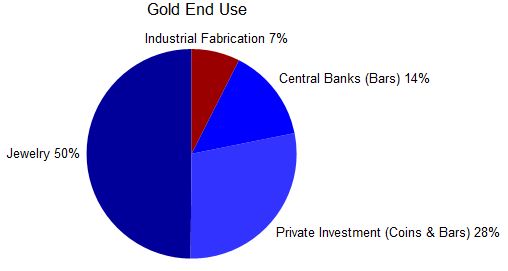 Silver, on the other hand, is a much more industrial metal.

According to the World Silver Institute, 56% of silver demand comes from industrial fabrication, which includes electrical, electronics, brazing alloys, solders, photovoltaic, and other industrial applications.

The rest comes from jewelry, investment, and silverware — which I also consider very similar to jewelry. Here's how silver's end use breaks down. 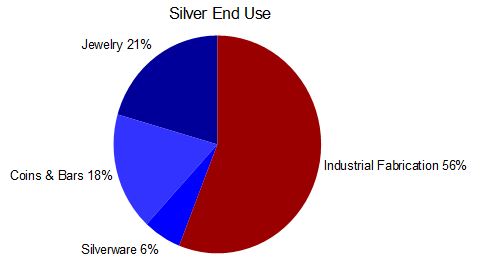 So, in many ways, silver is both an industrial metal and a precious metal — an "industro-precious" metal if you will. This is an extremely important dynamic that most investors seem to overlook. It's important because what's good for one metal isn't always good for the other. Here's what I mean...

At the end of the day, I think about gold and silver like this...

Gold is about 90% precious metal and about 10% industrial metal.

Silver is about 50% precious metal and about 50% industrial metal.

But that doesn't mean silver is any less valuable. In fact, you could make an argument that since we use silver in more real applications, it is more important than gold. So maybe it's gold that should come second?

Of course, gold is extremely important to global finance among other things. But as far as the number of end uses goes, silver certainly has gold beat.

Whether you know it or not, you rely on silver every day. The metal is all around you right now. It's in your cellphones, laptops, televisions, tablets, printers, scanners, fax machines, keyboards... the list goes on and on.

What this means is that while gold is certainly a highly desired metal, silver is vital.

And it's a commodity that the world constantly devours in massive amounts.

Every day, the world consumes nearly 3 million ounces of silver. Melted down, that would produce a single seven-foot cube weighing over 200,000 pounds!

But silver is different.

It's very common for silver to get tossed out without being recycled.

And we're not talking about a case of empty beer cans from the weekend that don't make it into the recycling bin.

We're talking about millions of dollars' worth of silver getting tossed out with the dirty cat litter every single day. According to a report from the United Nations’ Global E-waste Monitor, consumers around the world threw away $57 billion in 2019 in the form of gold, silver, copper, platinum, and other high-value metals found in e-waste.

And once any of these items has served its purpose, it generally gets tossed. The fact is it's simply more expensive to recycle the silver from these products than it is to dig more out of the ground.

Consider just one piece of technology no one can seem to live without: the cellphone.

A single cellphone only contains a small bit of silver. The United States Geological Survey (USGS) estimates that a typical cellphone contains about 0.35 grams. But cellphones are as common as taxis in New York. There are about as many cellphone subscriptions around the world as there are people.

In the U.S. alone, 150 million cellphones are retired each year — with almost 1.7 million ounces of silver inside.

And that's just cellphones... just in the U.S.!

Remember I said there is more gold above ground than silver? Well, that's why. Silver simply gets thrown out in the trash at much higher rate than gold. According to the World Gold Council, about 27% of the world's supply of gold in 2019 came from recycling. Meanwhile, The Silver Institute says only about 16% of total silver supply came from recycling in the same year.

Moving forward, silver consumption is expected only to climb. Along with current industrial fabrication, there are hundreds of new applications for silver that have the potential to significantly increase demand.

But none of this is why silver prices are surging right now.

As I mentioned earlier, the price of silver is simply following gold. Investors are seeking a cheaper alternative to gold. But considering end-use demand, is silver's price rally unjustified?

The great comedian Lenny Bruce once said, “The truth is what is. And what should be is a fantasy, a terrible, terrible lie that someone gave to the people long ago.” In the precious metals market right now, the truth is silver prices are surging along with gold. And silver's true end-use demand will probably continue to go ignored by the retail masses.

So, in short, if gold is heading higher, so is silver.