Silver is Hamburger, Gold is Steak

Silver is a very misunderstood commodity. The metal is often linked to gold — and sometimes even called gold's “sister” metal. But the end uses of gold and silver are quite different.

Silver was one of the top-performing assets in the metals price rally, which lasted through 2011.

Since then, the price silver has seen a sharp and fast decline. But growing financial and security concerns around the world — coupled with discounted prices — have recently sent a storm of investors back into precious metals. 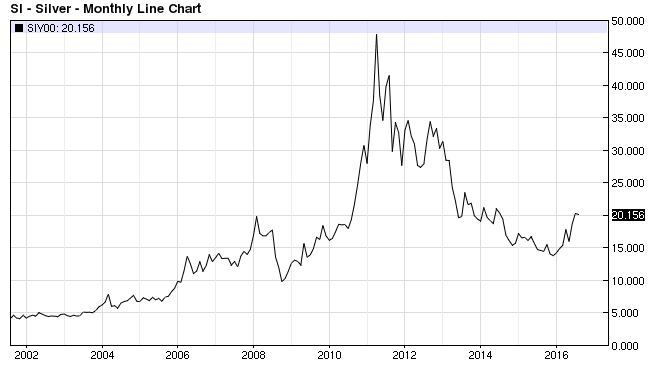 For the first half of 2016, the price of gold has increased about 30%, while silver prices have again gained about 70%. But there's one there's one thing that most of these silver buyers forget...

Silver is mostly an industrial metal.

Little known by most, industrial fabrication actually accounts for about 56% of world silver demand. Meanwhile, only about 8% of total gold demand currently goes to industrial use.

Every day, the world consumes nearly 3 million ounces of silver. Melted down, that would produce a single seven-foot cube. And what that means is this...

If (when) the world experiences a global economic slowdown, the demand for silver from the industrial sector is bound to drop.

And remember, we're talking about 56% of total silver demand — that's more than 650 million ounces of silver per year!

In an environment of global financial crisis, some of this lost demand will be made up by investors. The question is, will it be enough?

Silver does, however, have something else going for it that most investors also overlook. And it's that, unlike gold, silver often becomes irretrievably lost.

But silver is different. It's very common for silver to get tossed out without being recycled.

And we're not talking about a case of empty beer cans from the weekend that don't make it into the recycling bin. We're talking about millions of dollars' worth of silver getting tossed out with the dirty cat litter every single day.

Consider just one piece of technology no one can seem to live without: the cell phone.

A single cell phone only contains a small bit of silver. The USGS estimates that a typical cell phone contains about 0.35 grams. But cell phones are as common as taxis in New York. There are about as many cell phone subscriptions around the world as there are people.

In the U.S. alone, 130 million cell phones are retired each year — with almost 1.5 million ounces of silver inside.

And that's just cell phones in the U.S.!

During the first stage of the ongoing precious metal super cycle leading up to 2011, I was most bullish on silver. In fact, I very clearly remember writing, “I like gold. But I love silver.” And while I do believe the price of silver is still headed for bigger gains going forward, I feel a lot safer in gold right now.

If you're considering entering the precious metals market, start with gold. Silver should be secondary. In terms of monetary assets, silver is hamburger and gold is steak. Eat the steak.