The dollar is falling.

The dollar slid to a four-month low against a basket of currencies on Monday as investors weighed the prospects of a U.S. fiscal spending boost under President Donald Trump after his failure to push through a key healthcare reform bill. The euro EUR=EBS reached $1.0874, its highest since Dec. 8. Sterling, the worst performer among the G10 group of major currencies against the dollar this year, hit an 8-week high of $1.2598 GBP=D4.

You can see it yourself in the dollar index chart: 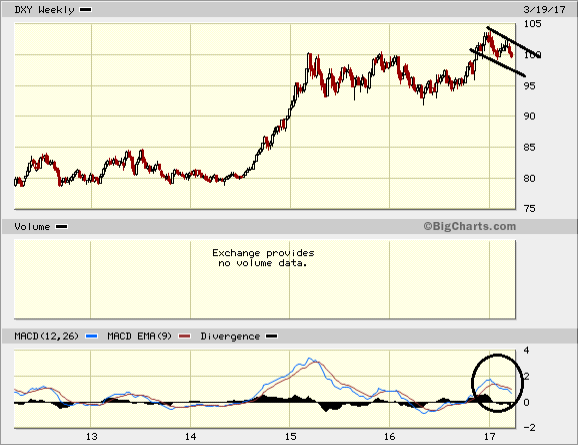 This is a five-year chart, so you can see how overvalued the dollar is compared to where it was in the past. The dollar hit a 14-year high in January. It could easily drop 20% from here and still be at normal levels.

The Dow Jones Industrial Average is down 165 points as I write this. It seems as if the market is rethinking the Trump rally. The Donald failed to get his health care package through the House.

This means he is unlikely to come through with major tax cuts and big spending on infrastructure.

They Hate the Dollar

Not only that, but other countries are actively trying to bring down the dollar.

Countries like Brazil, Russia, India, China, and South Africa have been taking steps to cut the dollar out of international trade. China in particular wants the RMB to be a leading currency and has joined forces with Moscow to make it happen.

On March 16, the Central Bank of Russia opened its first overseas office in Beijing. The local news called this “a small step forward in forging a Beijing-Moscow alliance to bypass the U.S. dollar in the global monetary system.”

The biggest beneficiary of this move to shrink the dollar will be gold and other hard assets.

As you can see by this 10-year chart, the price of gold is in a massive pennant formation. 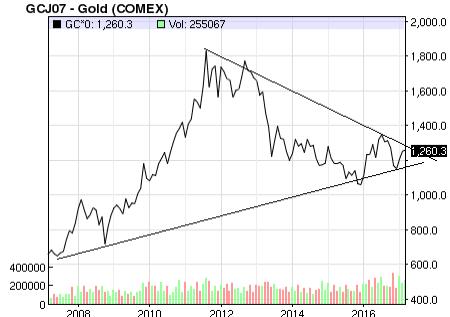 With the dollar falling and the Trump rally running out of steam, it is likely that the price of gold will break out to the upside. In my Bubble and Bust Report newsletter, we are sitting on gains like 140% in Aura Silver, 83% in Goldcorp, and 142% in Bitcoin.

But the run in precious metals and other hard assets is just getting started.

View this report and learn why you want to sell your dollar-based assets today.