Prince Salman and the rest of the Saudi royal family are using their oil price war to kill three birds with one stone in 2015.

But don't worry; their aim is way off target.

The current price war is more than the Saudi kingdom vs. North America. For the Saudis, the war has been about one thing only: market share. By strong-arming OPEC into not cutting production, the Saudis have effectively driven crude prices to a floor not seen in about six years.

That alone has had a considerable effect in the United States, with rigs being idled at a record pace and companies slashing capital budgets between 20% and 50%.

In Canada, the consequences are even more severe. Some of the largest operators in the oil sands are already at a disadvantage due to the costs associated with extracting and upgrading the vast bitumen resource.

In fact, we're about to see the Saudis bury their first victim: OPEC.

Always keep in mind that Prince Salman's goal is to strengthen Saudi Arabia's share of the global oil market — and he sees it as every man for himself right now.

If that means stealing a piece of the market from fellow OPEC brethren, so be it.

And the next in line to get pushed over the cliff is Venezuela.

If you're still wondering why the Saudis want to sabotage Venezuela's financial future, look no further than the U.S. Gulf of Mexico. Specifically, it's the refineries along the coast that are so valuable.

The Energy Information Administration made it even clearer for us last January.

Just take a look at the map of U.S. regional refinery capacity below: 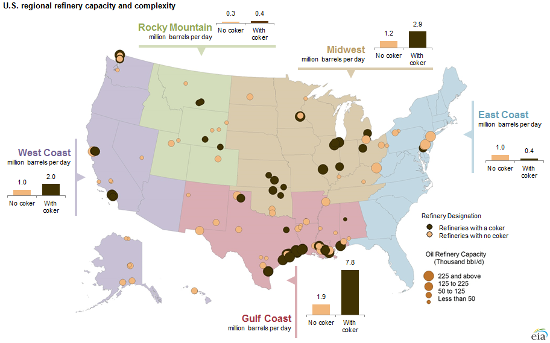 But it goes beyond simply how much crude we can refine on a daily basis — it's also the quality of the crude being refined.

Take another glance at the image above. The first glaring statistic that comes to mind is that approximately 81% of the refineries have coking units, which are necessary to upgrade heavy oil.

And that, dear reader, is why Venezuela is in dire straits.

Even though the country boasts more proven oil reserves than anyone else — 297 billion barrels (we'll take them at their word for now) — there's a catch to this staggering oil supply. It turns out that nine out of every ten barrels of proved reserves in Venezuela are found in the Orinoco Belt.

This supply isn't the light, sweet quality that companies in North Dakota and Texas are offering to refiners, but rather an extra-heavy crude similar to what is being extracted in the Canadian oil sands.

In other words, it's an incredibly expensive source of oil to tap; during a period of ultra-low oil prices, you can bet the country is feeling the pinch.

Without access to the refineries along the U.S. Gulf Coast, Venezuela would be in an even tighter spot.

So you can imagine the growing tension at OPEC meetings after Venezuela's exports to the U.S. Gulf of Coast declined by 20% between 2009 and 2014, while Saudi Arabia's exports to the same area have jumped 20%.

I'm not trying to suggest that U.S. companies are having the time of their lives with oil prices hovering around $50 per barrel.

Far from it, actually.

If nothing else, it's given individual investors like us the chance to find the real diamonds in the rough. And at a time when anyone with a dime invested in the energy sector is sick of volatility, being able to separate the best independent players from the pack can make all the difference.

So how are U.S. companies riding out the volatility?

That means both cutting the high costs associated with drilling and completing new wells and simultaneously increasing production.

As my readers found out recently, a very select group of companies within the United States have found a way of doing just that. In fact, it's one of the few ways I've seen oil companies thrive while oil prices are at a bottom.

And the best part is that it involves a technology that has been around since 1949.

I recommend you take a few moments and look at the full details for yourself here.