Believe it or not, running out of oil is not the Saudis' worst fear.

Would you have cause to worry if you were sitting on 262 billion barrels?

(Granted, we're assuming the Saudis aren't cooking the books, and that most of their future production is of much lower quality than what they were pumping decades ago... That particular problem isn't unique to Saudi Arabia.)

The Saudis aren't losing sleep over production, either.

If nothing else, they boast the world's greatest spare capacity.

And the number of countries that can actually increase oil production make up a very short list...

We may have celebrated the birth of the planet's 7 billionth inhabitant earlier this week, but you can bet there were people who took the announcement as less than happy news...

Population growth is actually the thing the Saudis fear most.

The country's population has grown nearly 18% since the turn of the 21st century, and the trend does not bode well: 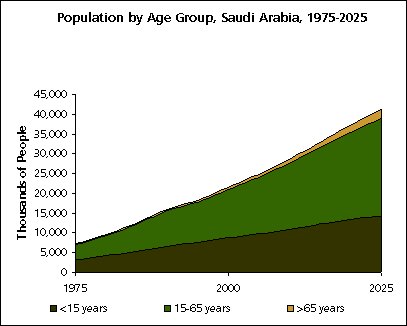 Along with their vast oil wealth, oil demand is sure to follow:

Sounds like a drop in the bucket when you consider the fact that their Ghawar oil field produces twice that amount...

As is usually the case, the devil is in the details.

The country's oil demand has jumped 50% over the last seven years. During that time, population grew less than 8%.

Truth is the Saudis are becoming just as addicted to crude as we are.

And at this rate, they will need three million barrels per day to stay afloat.

In order to make up this demand, the Saudis will be forced to cut into their exports.

The Saudis have lost the title of the world's largest oil producer. Russia's production was in excess of 10 million barrels per day last year. The Saudis only averaged 9.7 million bbls/d during the same period.

Imagine how the world will be begging for Saudi oil when the rest of the planet's reserves are tapped out...

P.S. Not sure how to trade this volatile market? Getting started is easier than you might think... Here are some of the hottest investment stories to cross my desk this week:

Trade Like an Insider: The Profit Formula Behind Compound Gold
It's downright frustrating to watch one billionaire rake in more than $300 million in less than two years. What the average investor doesn't realize, however, is that they can be on the same playing field as them. In Andrew Mickey's latest report, he unwraps the secret behind compound gold, showing you how you use the same exact ratio the insiders use.

Options Made Easy: The Only Way to Trade in a Recession
It's won't be easy to walk away from this recession with gains in your bank account... but that's precisely what Ian Cooper's readers are doing right now. Imagine trading with a system that delivers 68% or more in less than a month. Find out how they're doing it with Ian's proven system.

Water Investment Opportunities: Why Overpopulation is the Opportunity of a Lifetime!
There are plenty of resources available for the world's 7 billion people... and plenty of opportunities for investors, too.

2011 Market Panic: Black Swans: What Could Trigger the Next One
Analyst Ian Cooper takes a look at Lehman 2.0, what could trigger the next Black Swan moment, and offers an easy way to call tops and bottoms.

Natural Gas Outlook 2012: Your Gas Profits Are Hiding in Plain Sight
Energy and Capital's Keith Kohl explains why some of the best natural gas investments today are hiding in plain sight.

The One Buy Signal That Matters Most: This Will Prove the Power of The Rally
Economics ought to matter more. But in the end, this action speaks louder than any stat and statement.

The Road to DOW 14,000: The Light at the End of the Tunnel is Not a Train
Editor Steve Christ takes a look at the expansion and tells us why better days are ahead.

Buy Before the Next Jobs Number: Oil Up 24% in a Month
I graduated in the teeth of the 1993 recession. You heard the same complaints from twenty-somethings we hear now: high debt, no jobs, having to work at the Gap, etc. With no ready employment, I moved to a ski resort to run the lift line and work on my moguls. You can do that as a young, single guy... I imagine there are plenty of people doing it now.

The Latest in Cyber Warfare: Dropping Bombs on Iran
If a sophisticated computer worm can be designed to silently infiltrate secret enrichment facilities in Iran, it can certainly be duplicated or modified to do so elsewhere — on any number of critical infrastructure components.

Population, Resources, and Investments: 7 Billion People and Rising, Same Amount of Oil and Land
The greatest shortcoming of the human race is our inability to understand the exponential function.