An old rumor started up again this week but was largely overshadowed by the mammoth gas deal between China and Russia.

This time, it came from Saudi Arabia...

On Monday, Bloomberg reported that Saudi Arabia’s ambitious $109 billion solar energy plans have been taken over by Saudi Aramco, the state-run oil company whose estimated value runs as high as $10 trillion.

Now, I say it's an “old” rumor mostly because this story has been covered by news outlets and bloggers for a few years. Fact is, the Saudis have been anxiously looking for a way to increase oil exports, and transitioning a large portion of their grid to solar would be a welcome relief to their soaring oil consumption.

As you know, oil is the lifeblood of Saudi Arabia's export revenue. Of course, that's not to mention the new jobs that will be created from constructing solar panels throughout the country's less inhabited regions.

But the real truth is a little more surreptitious.

Just look at this... 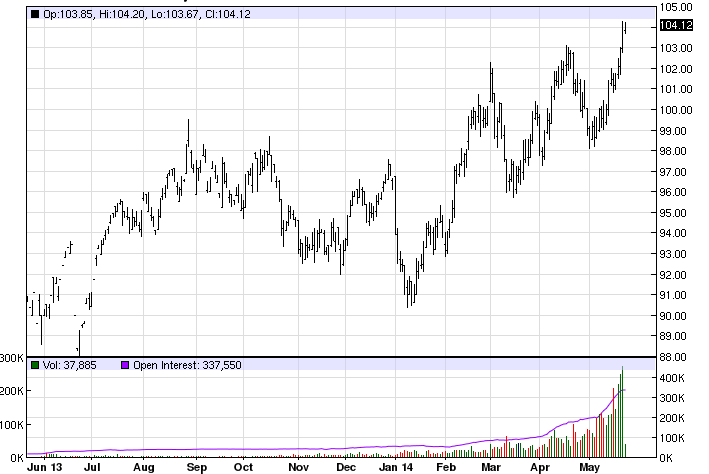 This chart shows oil prices over the last year. As prices continue to rise, we can guarantee that Saudi Arabia will begin aggressively developing its 41,000 MW solar plans for 2032.

That’s why Aramco is taking over the project.

If they can use something other than petroleum to power their electricity grid, it only makes sense that they'll be able to sell more of their oil to the global market.

Places like Europe, India, China, and, of course, the United States. The subject of energy independence may be a hot topic in the U.S. media, but don't forget that we still imported nearly one and a half million barrels of oil per day from Saudi Arabia in February.

Then again, it always looks good when the world’s biggest producer of oil “goes green,” but we're not fooled. Their plan is to squeeze as much profit as possible from the 265 billion barrels of oil they hold in proved reserves (and that's assuming they're not cooking the books, too!).

Either way, it's only a matter of time before Saudi oil demand grows to the point that they will once again rekindle these solar ambitions.