“The biggest challenge for us, [is] we're selling a solution to a problem that most people don't know about,” explains physics teacher and CEO of NOMADD Desert Solar Solutions Georg Eitelhuber.

We've said before that Saudi Arabia may be cutting its own reliance on oil and increasing its use of solar energy.

The country began a $100 billion solar funding program in 2014, joining the likes of the UAE, Egypt, India, and Jordan in boosting solar energy production.

Now, you're likely thinking about the major problems with this plan: paying for the solar equipment, integrating it into the Saudi energy grids, installing the panels in the sunny desert areas of the country...

And what about the dust?

This is the problem that NOMADD is addressing: solar panels in desert areas can lose as much as 60% of their energy production capacity during and after sand storms.

In order to clean a dusty solar panel, a person would normally have to go rinse the panels off with water. This costs time, money for labor, and, of course, water, all of which can add up.

The startup, NOMADD Desert Solar Solutions has created a simple way to solve this problem: it's called the NO-water Mechanical Automated Dusting Device, from which the startup gets its name. 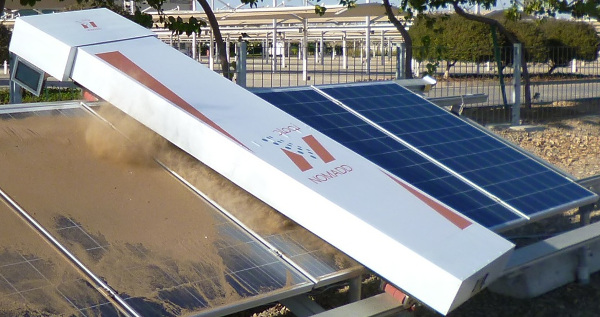 The design includes a long 3-5 meter tube, which runs along rails from one end of a solar panel array to the other cleaning as it goes.

According to Eitelhuber, this process can clean a solar panel array 99.5%, at least as well as water.

The process is automatic, though there's a chance it could also be connected to an app that will allow the owner of the panels to trigger the cleaning process manually.

NOMADD has gone through Lego-modeling, patenting, and seed funding of $200,000. It is now in beta, having been sold to several buyers under Engineering Procurement Construction Firms (EPC's).

This model allows for EPC's to bid for government-tendered projects, and for NOMADD to be part of the individual project designs. The startup will also gain part of the revenue from the project.

NOMADD is aiming to be more widely commercialized, and has a $1 million Series A funding round coming up to reach that goal.