In the business of oil, every last drop is a dollar sign. And up until recently, billions of dollars were left untapped in Russia’s oil fields, most of which have been operating for decades.

That is, until the U.S. started turning heads with its reinvigorated oil exploitation. Things began to change so fast that almost overnight the landscape of the oil industry was changed forever.

Natural gas reserves that were once considered worthless had turned the U.S. into the world’s largest producer of the commodity, right past Mother Russia.

And now, due in large part to rejuvenated crude oil production in North Dakota and Texas, U.S. production hit 7 million barrels a day in December – a number that hasn’t been seen in 20 years, according to Bloomberg.

Hydraulic fracturing, or fracking, is the key element to this success, as it blasts a mixture of water, sand, and chemicals deep into the rock, releasing gas and oil for extraction. This process has been used for years in Russia’s Siberian oil operations, but fracking only goes so far.

What the U.S. has been able to capitalize on is incorporating the use of horizontal drilling, where the drill is turned to a 90-degree angle and cuts horizontally through the rock, exploiting oil and gas that would otherwise go untapped and increasing the effectiveness of the fracking process. 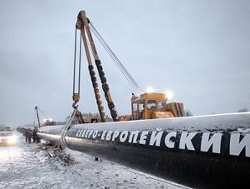 Russia, never one to back down from a friendly rivalry with America, has plans of its own.

TNK-BP is Russia’s third-largest producer and is in the process of being acquired by Rosneft (its largest). It has 102 wells planned for this year that will include fracking, almost half of its total wells. It has doubled the number of fracked wells from 2012 and increased this sixfold since 2011, reports Bloomberg.

State-run Rosneft is taking the bull by the horns, so to speak, not only by buying TNK-BP, but also, according to Bloomberg, using the method in 50 of its wells, compared to last year's three, in its largest production unit.

Lukoil, Russia’s number two producer, has enormous hopes for it Urevskoye oil field, which was first tapped in the 1970s. According to Bloomberg, with newfound reserves the company is hoping for an extra 35 million barrels or roughly $3.7 billion dollars’ worth – a production increase of 15 percent – over the next nine years.

“This is a very big change in the way the company approaches production that has literally happened in the last year and a half,” said Gazprom Neft’s deputy chief executive officer to Bloomberg. “We have made breakthroughs.”

And now that the technology is there, it is imperative that Russia harness every bit of its resources in order to comfortably maintain its stronghold on European supply – the supply behind half of Russia’s entire revenue generated from gas and oil.

Its 10 million barrels of crude production a day has it a notch above both Saudi Arabia and the U.S.

With contention from the U.S., Russian President Vladimir Putin is determined to maintain the current rate of production, and since September’s 10.4 million barrels the nation is seeing its highest output since the Soviet regime. These numbers are expected to remain constant throughout the year.

It’s a truly remarkable feat considering that only a couple years ago Russia was exploiting all of its gas and oil the ‘old fashion way.’ According to Bloomberg, Lukoil didn’t have a horizontal well in place until 2011; now it has 215, has added about 19 million barrels of production, and has plans to frack in 450 horizontal wells in the next three years.

Russia gets down to business when it comes to its oil; in essence, it really represents the nation's livelihood. It's certainly shown what it's capable of with a little motivation.

Eventually, efforts will shift away from the older fields that are going through their second wind, and focus will swing to unconventional reserves.

There’s the monster Bazhenov shale, located beneath Siberia’s current producers. It’s supposed to be as big as France and could hold more oil than Saudi Arabia, according to Bloomberg. It is likened to the Bakken shale formation that sent the U.S. into a frenzy.

Russia may have had its woes as it looked into the future a couple years ago, but now that technology has exceeded all expectations, Russia is milking its old reserves for everything it's got.

And when that’s done, it will have a whole other box of toys to play with.