Oil and gold have rallied amid steaming tensions between the United States and Iran.

Crude for forward-month delivery has increased by almost 5% to more than $63 per barrel, while gold has risen by over 3% to more than $1,580 an ounce since news of the Soleimani assassination broke.

But there's another very special commodity that's rallying even more while quietly sitting in the background: rhodium. 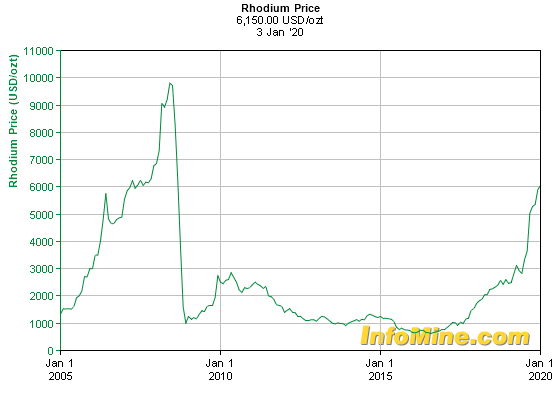 Rhodium is a member of a group of metals known as the platinum group metals (PGMs). These metals have similar physical and chemical properties and include platinum, palladium, ruthenium, iridium, osmium, and rhodium.

Rhodium is an important industrial metal used in specialty optical instruments, electronics, aircraft turbine engines, and as a jewelry finish. If you've ever bought “white gold,” it's likely you've bought rhodium. White gold jewelry is gold jewelry that has been electroplated with rhodium.

In fact, over 80% of all rhodium production will end up in a catalytic converter somewhere. So demand from the automobile industry is critical for rhodium.

Thing is, rhodium is quite rare. It's so rare that an entire year's worth of total world supply could fit onto the back of three pickup trucks. 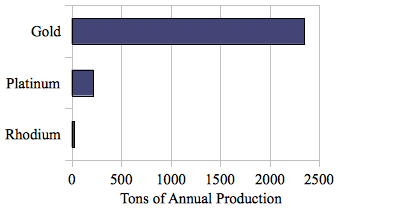 In fact, there are less than 10 mines in the entire world that produce any significant amounts of rhodium. Almost every one of those mines is located in a single country: South Africa.

There's no such thing as a mine that only produces rhodium. Like many other metals, rhodium is produced as a by-product of larger PGM operations.

Some 80% of the world's rhodium supply comes from South Africa, which has been a problem.

In 2008, supply shortfalls as a result of mining strikes in the country caused rhodium prices to spike to over $10,000 an ounce.

The financial crisis of 2008 eventually caught up with rhodium, and prices collapsed after the South African mines reopened.

The price of rhodium recovered a bit following the price collapse, but rhodium is often recycled from old catalytic converters. An increase in recycling beginning in 2008 actually led to an oversupply in the market — eventually pushing prices all the way down to $750 an ounce.

Last year, the rhodium market remained in surplus, but growing demand over the long term is expected to bring back a supply deficit. There's no reason not to expect prices to hit $10,000 an ounce again.

There's just one problem: Investing in rhodium is difficult.

In fact, up until only a few years ago, there was almost no way to invest in rhodium. Kitco sold a rhodium “sponge,” which is industry parlance for a powdered form of the metal. That was about it.

In 2009, the Cohen Mint was the first to produce .999 fine rhodium bullion rounds and bars. More recently, the Baird Mint and Pamp Suisse have introduced a line of physical rhodium bars which are available in one- and five-ounce bars and fractional sizes of one-tenth, one-quarter, and one-half ounce. 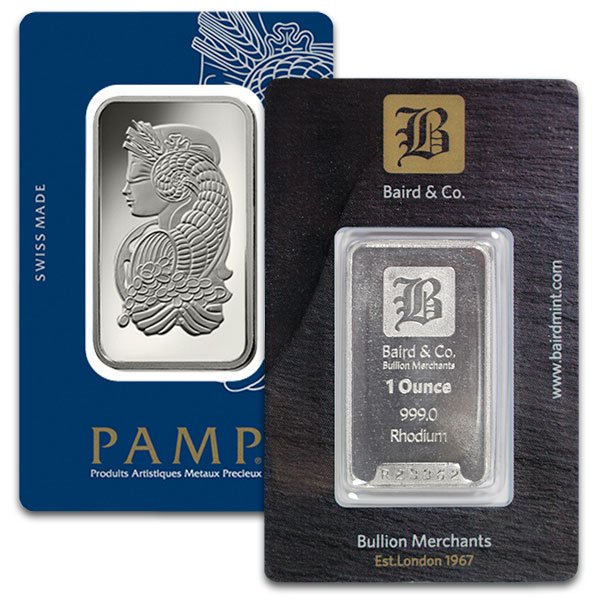 However, the premiums for rhodium bullion are outrageously high. Provident Metals has a near 100% premium on a Baird Mint one-tenth-ounce rhodium bar. That means you pay double the market price.

And on the sell side, things are no better. An investment-size holding is going to be extremely difficult to sell. Your local bullion dealer is probably not going to want to buy your rhodium when it comes time to divest. So if you do decide to buy rhodium as investment, make sure you know where you're going to sell it first.

For direct exposure to physical rhodium, there is an ETF available. Deutsche Bank launched a rhodium ETF (LON: XRH0) in 2011 that is 100% backed by the physical metal. But the ETF doesn't trade on any of the American exchanges, meaning it might be difficult for some to trade — which it barely does anyway. Right now, the exchange's three-month average daily volume is 224 shares a day.

So, at $520 per share, that's an average just over $100K in daily interest in XRH0. Compare that to a gold ETF like SPDR Gold ETF (NYSEArca: GLD), which traded almost 7 million shares a day, with a value of over a billion dollars.

And as far as rhodium stocks go, there is no pure or even primary metal play because, as I already mentioned, rhodium is produced as a by-product.

There really is no perfect rhodium investment option. The safest and most direct is probably physical rhodium bullion. But, again, it's very important to make sure to have a plan to divest before buying.