No Hope for Nuclear

I changed my mind...

Over the past few years, I’ve been reluctantly singing the praises of a new nuclear renaissance.

I say reluctantly because I’m not actually a fan of expanding nuclear power. It just seems like a costly and superfluous agenda, as the trifecta of energy efficiency, storage, and renewable energy technologies is simply economically superior to nuclear.

However, I never really had much more than a hunch that this thesis made sense. In other words, I lacked enough data to back my argument.

And to be honest, based on the amount of nuclear that’s been in development all across the globe, it was hard to deny that the nuclear power industry was chugging along wonderfully.

But all that changed last week after I read the latest World Nuclear Industry Status Report, which, to be honest, does not paint a bullish picture for nuclear.

Now, before I go any further, understand that I’m not saying nuclear is dead. On the contrary. Billions upon billions of dollars continue to flow into the space, and I’ve even personally taken positions in companies that have a piece of the action.

But today, I’m not focusing on quick scores. Instead, I’m focusing on the next five to 10 years.

You see, since 2005, back when I first started covering renewables, the renewable energy industry has been growing at light speed. If you’re a regular reader of these pages, you’re fully aware of this reality, as I’ve dedicated dozens of articles to it — complete with plenty of objective, peer-reviewed, factual data to back up the claim.

The bottom line is that renewable energy, energy efficiency, and energy storage technologies are continuing to enjoy rapid cost reductions and huge increases in efficiencies and overall production.

Nuclear? Not so much.

In fact, when you look at the advancements that have been made in renewable energy, energy efficiency, and energy storage just over the past five years and then look at the lack of advancements we’ve seen in nuclear over the past 30 years, well, it doesn’t take a rocket scientist to know that any chance of meaningful nuclear power development has been completely thwarted by the new renewable energy revolution.

Of course, it’s one thing to tell you this and another altogether to show you.

So here are nine reasons nuclear power may be doomed, thanks primarily to the boom in renewable energy...

Nuclear remains relatively stagnant but with a lot of empty promises for growth, while renewables are not just gaining steam on nuclear but far surpassing it. 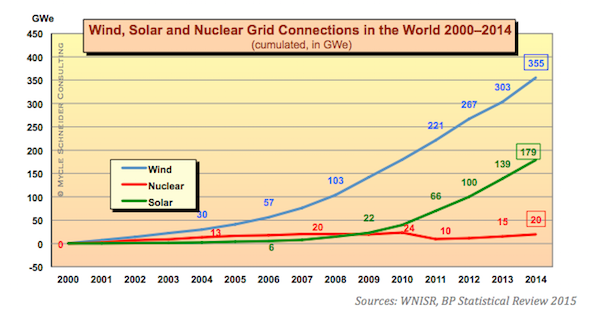 There’s no turning back now for renewables. Solar and wind in particular are unstoppable, and this insane growth is quickly extinguishing any hope for a nuclear renaissance.