Why Dick Cheney May Fail to Bring Down Oil

Welcome to Energy and Capital's new weekend review. Each week we'll take a look at the week that was and what's ahead, along with what you may have missed from our free sister sites, Wealth Daily, Gold World, and our free blogs. Enjoy.

"The price of a barrel of oil has surged to new historic highs each day, even when adjusted for inflation, and the price at the gas pump is projected to do the same in the coming months. Light sweet crude oil surpassed $110 a barrel today, a 407 percent increase since President Bush took office. Gas prices have reached record levels of $3.27 a gallon and the oil imported from foreign countries has grown to 60 percent of our total since President Bush took office. These prices and our growing dependence on foreign oil have caused great hardship for American families and businesses struggling to make ends meet in this economic downturn.

"The landmark Energy Independence and Security Act of 2007, passed with strong bipartisan support in Congress last December, took strong steps toward reducing oil consumption. Now, your upcoming trip to the Middle East provides an opportunity for you, on behalf of the Bush Administration, to call upon your considerable influence with OPEC nations to encourage oil producing countries to increase their oil production. President Bush has endorsed the idea of an American President ‘jawboning' oil producing states to expand production when rising prices jeopardized economic stability. This must be another critical step as part of a comprehensive plan here at home to lower energy costs for the American consumer, increase energy independence, and enhance our national security.

"In addition to diplomatic efforts during your trip, the Administration should also support efforts pending in Congress to promote energy independence and save consumers money:

"In a strong bipartisan vote last May, the House passed legislation to crack down on price fixing by authorizing legal action against oil cartels that conspire to inflate prices. That bill, H.R. 2264, is now pending in the Senate. Unfortunately, the Bush Administration has announced its opposition to this bill which would benefit millions of American consumers. Instead of issuing veto threats, the President should support this legislation to give the Administration a vital tool to fight price-fixing by OPEC cartel entities.

"The House of Representatives has again passed legislation to significantly expand our renewable American energy industry in a fiscally responsible way, paid for by ending taxpayer subsidies to the five largest oil companies which are earning record profits. This legislation is pending in the Senate. These subsidies cannot be condoned at today's historically high oil prices. When oil was just $55 a barrel--half the current price--the President said that such subsidies could no longer be justified. We agree and hope he will actively support this legislation to direct our energy dollars from subsidies for oil companies to development of alternatives to increase our energy independence and improve our national security.

"While the 110th Congress has great differences with you and President Bush on your energy policies over the last seven years, I sincerely hope your visit to Saudi Arabia brings relief to the American people that could have ripple effects across our economy. I also hope your mission advances the cause of peace throughout the region."

Unfortunately, Cheney may have the same luck with OPEC that President Bush has had.

When Cheney flies out to the Middle East Sunday he'll raise the issue of record high oil prices. But it may not do any good. The argument that an economic melee could drive down demand for oil has been heard and rejected by OPEC over the last six months.

They're not budging. It's not as if Venezuela or Iran is going to move on oil prices. And the Saudis aren't going to change their opinion without consulting OPEC members who are sure to reject the idea . . . again.

Blaming OPEC isn't going to get us anywhere. The problem is that there's no shortage of global oil consumption. OPEC, it seems, is already stretched by big increases in demand out of China, India, and Middle East countries.

According to Arab News, "OPEC strongly believes oil prices will stay at current high levels for the rest of this year due to speculation and geopolitical tensions and not because of lack of crude in the market. The oil cartel is convinced, in view of the ground realities, that it can't do much to rein in the bulls. But despite the pressure even from the top and all the talks, oil producers have so far stuck to their guns.

"What magic wand Cheney holds that will make his trip to the region more successful than others is difficult to know. At a time when some OPEC producers are skeptical of the US role in the region (not to mention its problems with OPEC member Venezuela) it is unclear what enticements Cheney might have to offer."

What makes it worse is that summer driving season isn't even here yet and we're already at $3.27. Four dollars at the pump isn't far-fetched. Just ask residents of Maui and a few stations in California where $4 is reality.

For the week of March 10, 2008, here's what we covered in Energy and Capital and elsewhere.

Energy Storage Stocks: The Lucrative Play No One's Talking About
A UK-based company is placing its bet on the storage of energy in hydrogen. It is developing an electrolyzer that uses solar or wind power to split water into hydrogen and oxygen. The hydrogen is then pressurized and stored for use in electricity production or for powering cars.

Rising Oil Prices: How Can You Protect Your Investments from Surging Oil Prices?
Remember when people felt oil was too expensive at $60 a barrel? How about when it reached $80 a barrel? Now ask yourself, "How will I feel about $109.72 per barrel when prices hit $120 a barrel this summer?"

Libyan Oil: One Country's $109 Profit on $110 Oil
In February, $85 to $90 sounded like an agreeable oil price to Shokri Ghanem. Then in early March the head of Libya's national oil company declared that his country had "no complaint" with $100 per barrel. Now we're pushing $110, and Libya's big-mouth momentum is building with each dollar. 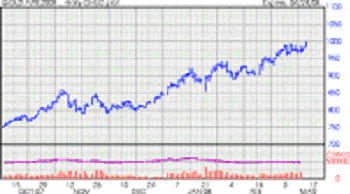 Ben Bernanke to the Rescue: Homebuilders Bounce . . . for Now
Ben Bernanke strikes again. And for the homebuilders, his $200 billion injection into the financial markets was the equivalent of manna from heaven: more money thrown at a mortgage market in crisis. All of them rallied sharply in the wake of the latest cash dump courtesy of the Federal Reserve. But that deluge of dollars managed to completely overshadow more troublesome news from the downtrodden industry.

Health Sector Stocks: Anavex: Under-the-Radar Stock up 39%
It was November 30, 2007, when Brian Hicks introduced you to Anavex (AVXL:OTCBB) as it traded at a paltry $3.75. "If it is able to execute its business plan, even a small investment in this stock is going to be an absolute home run," said Brian. "Seven of their drug discoveries are currently working their way through the approval process after very promising early trials."

American Express Stock: Only the Naive Are Investing Long on American Express
The Bernanke Fed move is a temporary band-aid. It turned a 24-hour lending window into a 28-day lending window. That $200 billion banking blood transfusion was placed to ensure that your checks clear. That's how bad the banking world is. You don't want to hold the American Express, Bear Stearns, Citigroup, or even Bank of America.

The Chinese Market Bubble: What a Chinese Death Cross Means for Your Portfolio
It's known to technicians everywhere as a death cross, and it is happening on the Shanghai Composite Index. That's the index that has jumped by over 450% during the last two years--a sure sign of a speculative bubble. A death cross is formed when the 50-day moving average of a stock falls below (crosses) the 200-day moving average. It indicates that there are currently more people selling than buying the stock. It is as bearish as it gets.

105% gains in 16 trading days: Take It.
While we remain bullish on natural gas and our United States Natural Gas (UNG) stock, we're recommending that you exit the second half of the UNG April 2008 43 calls (UNGDQ). In no way does this move reflect bearishness on our part . . .

The Credit Crisis Is Nearing An End (We Think): Unfortunately, They're Wrong . . .
"Standard & Poor's Ratings Services believes that the bulk of the write-downs of subprime securities may be behind the banks and brokers that have already announced their results for full-year 2007. There may be some additional marks to market as market indicators have shown deterioration in the first quarter. However, when we dissect the percentage of write-downs taken against various types of exposures, in our opinion the magnitude of some write-downs is greater than any reasonable estimate of ultimate losses . . ."

Bear Stearns pulls a "Countrywide"?: Too Bad the Rumors were True...
It was 2007 when Countrywide Financial (CFC) had us believing that it had ample capital and liquidity to stay in business. They disclosed $35.4 billion in reliable liquidity. And they disclosed "sufficient liquidity available to meet projected operating and growth needs and significant accumulated contingent liquidity in response to evolving market conditions."

Oil Will Pay for the Iraq War?: Where $52 Billion Worth of Oil Is Disappearing Per Year
Last year alone, says Bryce, the American forces in Iraq burned through more than 1.1 billion gallons of fuel.

Have a great weekend,