Nuclear energy doesn't have the best reputation around.

If you ask yourself about nuclear power, what is the first thing that comes to mind? Is it war, or perhaps the image of a gigantic mushroom cloud billowing in the sky?

Maybe it's the latest news coming out of Iran. After all, Russia just announced plans to start up Iran's Bushehr nuclear power plant in 2010. The new 1,000 megawatt plant is 15 years in the making, costing upwards of $1 billion. Of course, along with that news comes the accusations that Iran is simply trying to cover up some devious plot to build a nuclear bomb.

Then again, the idea of Iran wielding a nuclear weapon doesn't do much to boost nuclear energy's reputation, does it?

I'll confess that on occasion, those thoughts run through my mind when I read about nuclear energy. Rarely do I find someone that can look past the nuclear stigma, seeing it as one of the few clean energy sources with the potential of generating energy on a global scale.

But like it or not, nuclear energy is something we're going to have to deal with, especially if we plan on replacing oil's share of the energy demand. I'm always reminded of a quote from one of my readers, sent to me more than two years ago: "We can only ride fossil fuels for so long. Even if we make it to 2030 without any catastrophic problems in production, oil's time is coming to an end. And think about this: by the time we reach that point, our demand may be too much for most renewable sources to make up."

Now don't get me wrong... I'm not here to say we should abandon all hope for renewables. The fact is that if we stand any chance of lasting through the backside of peak oil, we'll have to develop every bit of energy we can get our hands on — including nuclear energy.

If you think demand will continue to drag over the next several decades, it's probably time to wake up. The world's growing population alone will ensure that fact.

At last count, there were 6.7 billion people on the earth. By the year 2040, that number is expected to swell to over 9 billion. Since the 1960s, that number has grown by a billion roughly every 13 years.

As you're probably aware, approximately 60% of the population is located in Asia. Nearly 20% live in China — another reason to learn Chinese. Does it really come as a surprise to you that we look at China whenever we talk about energy demand growth?

Meanwhile, China Decides to Mine the Moon

They're calling it the next race to the moon.

And this time, the U.S. will be the runner-up. Rather than a gold medal — or even the chance to stake a flag on the moon's surface — I believe China already has its eyes on the prize.

Now, it's been three years since I brought up helium-3.

Helium-3 is a light, non-radioactive isotope of helium that can be used as a fuel for nuclear fusion. Although it is rare on earth, there's approximately one million tons of helium-3 on the moon's surface. (Compare that to the 10 tons of that we can find on earth.)

Just to give you an idea of the potential it has, we'd be able to power the U.S. for an entire year on just 25 tons of this stuff.

Three years ago, China outlined the future of its space program. Part of that outline included a trip to the moon to explore the potential for helium-3. Over the next few years, I have a feeling you're going to hear a lot more about it.

So is strip-mining the moon in the future?

I think the jury is still out as we let reality sink in.

At the very least, we're still decades away from making this dream a reality. It could take up to 40 years before we see commercial power generation. Then again, you don't have to wait that long to grab a few gains...

Eventually, we're going to come to terms with nuclear energy.

China certainly has. With 11 reactors currently operating and providing only 2.2% of the country's total electrical generation, China's nuclear ambitions are clear. The country already has 20 new reactors under construction, with another 37 planned and 120 more proposed reactors on the horizon.

Perhaps the easiest way for investors to get a piece of the upcoming nuclear profits is through Market Vectors Nuclear Energy (NYSE: NLR). The fund invests 80% of total assets in companies which earns at least half of their revenue from nuclear power.

However, just because something is "easy" doesn't mean it's worthwhile.

Since May of 2009, NLR's chart looks more like a flat-lining patient in a hospital than a stock performer. 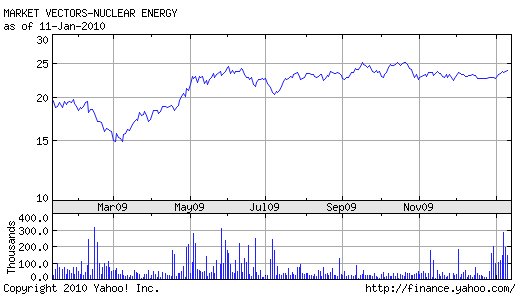 Thanks, but no thanks.

Of course, another way to play a nuclear revival is through uranium. My colleagues have recently mentioned Cameco (NYSE: CCJ), which is a strong nuclear bet.

In the past, Cameco was one of those plays that made me cringe. When its Cigar Lake mine was flooded in October 2006, uranium prices shot through the roof, reaching up to $145 per pound — one of the reasons some investors, including many of my readers, were all smiles.

Since then, prices have dropped considerably. It now trades at $43.50 per pound.

Cameco announced last week that they will have enough water pumped out of Cigar Lake to resume development as early as April. The company has a 50% stake in the mine, which is expected to produce 18 million pounds of uranium per year.

However, uranium isn't the only way to go... You can always play its biggest obstacle: waste.

Today, the largest obstacle for nuclear power is waste disposal. It's always on the top of the list when I ask my readers their thoughts on investing in the nuclear energy.

Companies like American Ecology Corp. (NASDAQ: ECOL) are one of the few companies in the U.S. which deal with the treatment and disposal of radioactive and hazardous waste.

Look, it doesn't matter which side of the fence you're on when it comes to nuclear energy. Once the mainstream realizes just how bad we're dependent on energy sources like oil, the outcry won't be for 'green' alternatives, but for 'clean' energy.

That includes developing nuclear energy to its fullest potential. Over the next few weeks, I'll give you scoop on a few more nuclear plays for your portfolio.

Editor's Note: As bullish as I am on nuclear energy, the harsh reality is that we're deeply dependent on oil. And while countries continue to develop every source of 'clean' energy available, the last few hot spots for oil will make investors a fortune.

I've found one oil play that is single-handedly keeping U.S. production steady. And the best part is that I was completely wrong about how big this play was going to get. In this free report, we'll tell you how readers of the $20 Trillion Report made gains of 50% and 18% in just a matter of days. Click here to learn more about this opportunity.