Russia is staring a recession in the face.

If oil prices stay this low for much longer, the former Soviet Union will be forced to use credit to bail out state-owned Rosneft.

It looks as though Russia will be the first to bow out as OPEC puts pressure on non-OPEC members.

Although harried by low prices, the oil industry in North America doesn't have the obligations Russia does.

A good example of this is Russia's currency, the ruble.

Last week, the ruble fell 36% against the dollar, although it ended the week down just 2% after a desperate interest rate bump from Russia's central bank. 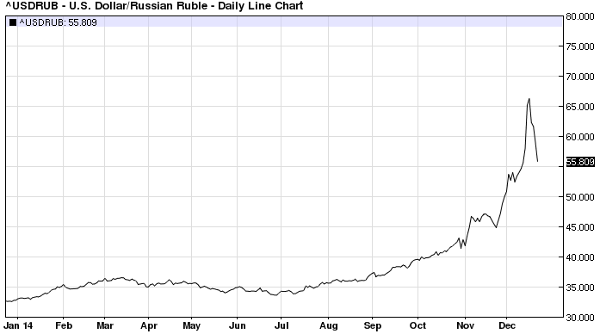 Still, the U.S. dollar is crushing the ruble right now, even though both countries rely on higher oil prices to keep their energy industries afloat.

The only difference is that Russia relies on higher oil prices to budget its government.

The biggest problem Russia has is that its economy isn't diversified. Take a look at this...

As you see above, 68% of Russia's exports are petroleum products, crude oil, or natural gas. Despite major natural gas deals with China, oil is still the most important resource.

So when oil prices decline in value from $100 per barrel to $50 or $60 per barrel — as we have seen in the last six months — Russia effectively loses half of its export revenue in a single year.

That's a big enough chunk to cause a panic, like the one that's crippling the ruble and causing a massive flight of wealth from Russia.

For the first nine months of 2014, the UK granted 69% more investor visas to rich Russians. An investor visa allows people from non-EU member countries to speed up the process of citizenship in return for buying bonds for millions of pounds.

Remember, this is just in the United Kingdom. Think about all of the other wealthy Russians out there fleeing to the U.S., Germany, China, and other countries.

As long as more rich people leave, the drain on the Russian government's budget is inevitable.

I guess when you prosecute wealthy people you don't like and seize their assets, other rich citizens take the hint...

Indeed, some of the Putin regime's shady tactics and manipulations are coming back to haunt it — none more so than the seizure of Crimea and subsequent Ukrainian Civil War earlier this year.

Many have complained that economic sanctions by the U.S. and EU against Russia for its involvement in Ukraine haven't been effective.

And while this is true in a lot of ways, earlier this week, the sanctions finally hit Russia where it hurts: Rosneft.

The state-owned oil company, one of the largest traded companies in the world, is struggling to pay its debts. The company was sitting on $45 billion in debt at the third quarter's end because of reckless asset purchases over the last two years when oil prices were higher.

On Monday, investors and Russians sighed in relief as the company was able to complete a $7 billion debt payment.

However, to do so, Rosneft had to sell $11 billion in notes earlier this month.

And with another $7 billion repayment due in February, it doesn't seem like Rosneft will be able to pay for it alone if oil prices stay as low as they are.

Also, because of European and American sanctions, Rosneft won't be able to borrow from European or American banks, which will leave the options of a bailout limited.

The company tried to improve cash flow by buying Morgan Stanley's oil trading business on the cheap, but U.S. officials denied the deal because of sanctions.

Clearly Putin's geopolitical ambitions were financed on $100 oil, but with $60 oil, his country is fighting to keep itself afloat.

So What Does This Mean for You?

Russia's struggles tell us a lot about the global marketplace...

For one, energy is the most important piece of the puzzle: More resources means lower prices, which hurts producers, while fewer resources means higher prices and pain for consumers.

Not only that, but we see just how much power OPEC has over the global economy. With one quick decision not to cut production, OPEC has offered a stimulus to the United States and at the same time annihilated Russia's currency and quite possibly its economy.

Of course, U.S. oil production could also suffer greatly if prices stay too low for too long. But energy isn't as big of a component of our economy, so we probably won't be in Russia's shoes anytime soon.

The key for investors, as I've been saying for months now, is to find energy investments that are still profitable even when oil is low.

This can include natural gas investments, thorium stocks, or even solar and renewables. But one easy way to make money is through oil companies that are still profitable.