Profiting at 92 Barrels per Second

I’m not far off saying that the Permian Basin is officially the worst-kept secret in the U.S. oil boom.

Here we are more than a decade into the tight oil boom, and it’s become glaringly obvious to everyone that the biggest profits are in West Texas.

For most, the Permian Basin’s true value was hammered home last year, when the USGS announced that the Wolfcamp shale and Bone Spring formation in Texas and New Mexico’s portion of the Delaware Basin held a whopping 46.3 billion barrels of oil.

In case you’re keeping track, that’s more than double what the USGS’s assessment was just three years ago.

But just how much oil are they expecting to pump from beneath Texas’ soil going forward?

How far will U.S. drillers take this oil boom?

The answer may shock you...

Profiting at 92 Barrels of Oil a Second

Okay, let’s not call the Permian Basin the worst-kept secret in the U.S. oil industry.

Let’s call it an open secret.

At least I’d call it open, considering the average investor can log on to the EIA’s website and check out the numbers for themselves. And if they do, they’ll immediately recognize the opportunity at hand.

Here’s what the last 10 years has looked like for Permian oil output: 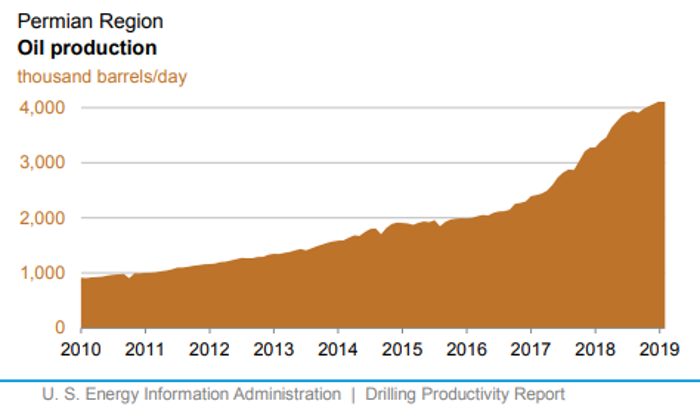 In January of 2008, oil production from the Permian region totaled around 862,000 barrels per day.

Folks, that’s about as good as it gets for an oil boom.

As one of my colleagues pointed out to you earlier this year, West Texas is the most underrated long-term investment in the world today.

But things are about to get even more lucrative.

It turns out that production in the Permian Basin is going much, much higher.

Some analysts are calling for oil output in the Permian to top 8 million barrels per day as early as 2023.

Yes, you read that right.

You see, the key to the Permian’s success is more than having access to a massive oil resource underground.

If we’ve learned anything from the chaos taking place right now in Venezuela, it’s that true oil wealth only comes if you can get those barrels to market.

Venezuela’s state-run oil company, PDVSA, has 297 billion barrels of oil reserves at hand — the most in the world. But production has been in a death spiral for decades; its crude reserves are simply too expensive to extract.

Over the last few years, drillers in the Permian have been incredibly effective at driving down drilling costs.

In fact, companies in the Permian Basin can now extract their oil for under $45 per barrel on average.

That’s HALF of what their average break-even price was only five years ago!

Now think of what will happen if drillers in the Permian are able to boost output to 8 million barrels per day...

That means that in just four years, more than 92 barrels will be flowing out of Permian wells EVERY SECOND!

If output grows to 8 million barrels per day in the Permian Basin, oil exports would surge higher, and Texas would effectively dethrone Saudi Arabia to become the new global swing producer!

So the real question now is: How can YOU pad your portfolio with these Permian profits?

I know most of you saw the bidding war for Anadarko recently.

It turns out that Occidental won that battle after it topped Chevron’s $33 billion bid. Chevron bowed out of the fray, saying that a higher offer would’ve eroded value to its shareholders.

This is just the beginning, dear reader.

If you’re wondering who’s next, just consider that there are still some heavy Permian producers out there, including Concho Resources, Pioneer Natural Resources, and Diamondback Energy.

Yet those major oil companies looking to spend billions to expand their presence in Texas’ oil acreage may not have to pay the hefty premium for acreage in the Permian.

What do you think would happen if Big Oil found another massive billion-barrel oil play in the Lone Star State to tap?

That may happen sooner than anyone would have imagined.

In the coming weeks, we’ll talk more about this undiscovered oil play that some are calling the next game-changer in U.S. oil.