I was at an investment conference once talking with another analyst. It was the kind of talk that changes your life and your entire way of looking at the world.

At this type of meeting, companies send executives to talk up the stock and convince people to recommend investing in it. I’ve been to a lot, and they’re really helpful. You get to have one-on-one talks with people who are usually hidden behind boardroom doors. And you’ll get introduced to companies that you might never hear of otherwise.

I’ve found some great investments for my readers at these types of events — double-, triple-, even quadruple-baggers. But the best thing I’ve ever left with was the new way I looked at investing after talking with this one guy.

You see, up until that point, I’d prided myself on being a fundamental investor. I looked for value in companies and invested in what I thought were the best. I was taking a page from Warren Buffett, and from Benjamin Graham before him. And I’d had a lot of success. But I’d also had a good number of failures, too.

I didn’t look at charts too much. I thought technical traders were like fortunetellers or seers, trying to read the bones and smoke to predict the movements of the market.

I was lamenting a particular trade that had gone south with the analyst I mentioned before. And he asked if I’d ever looked at the technical side of the trade.

I was shocked. I mean, this was a guy I respected as a professional, and here he was telling me to read bones and look at which way the sage smoke blew. What the heck?!

He obviously saw the doubt in my eyes, and he said something that changed my life and my investment strategy. He said, “Jay, people lie. Numbers don’t.”

Those five words made me stop and think. I remembered all the times I’d had a CEO tell me how great his product or idea was. How undervalued his stock was. All the times they’d tried to sell me a pig dressed as a princess.

He was right. Numbers can’t lie. And people do. They always have. And, unfortunately, they probably always will.

So, I started looking into technical indicators more seriously. I started using them when I was thinking about recommending stocks, and my track record got way better. So did my own portfolio.

I still want a company to have solid fundamentals. I'm still a value investor at heart. But now, I see the value in technical analysis.

One of the indicators I discovered in my research was convergence, and its opposite, divergence. This can be an incredibly powerful tool when it comes to picking stocks. Because it’s all about picking stocks. It doesn’t matter what the market does. Just the stocks you pick.

And one of the best strategies to take advantage of convergence and divergence is pairs trading.

Pairs trading is when you find two stocks that move together. That is, two stocks that are highly correlated. Then you watch for a divergence from that correlation and invest.

Before I get too far ahead of myself, let’s talk about correlation. It’s a pretty easy concept. When two stocks move at exactly the same time in the same direction, they’re said to have a perfect positive correlation. If they move exactly opposite, then they’re perfectly negatively correlated. If they move independent of each other, well, then they’re not correlated. 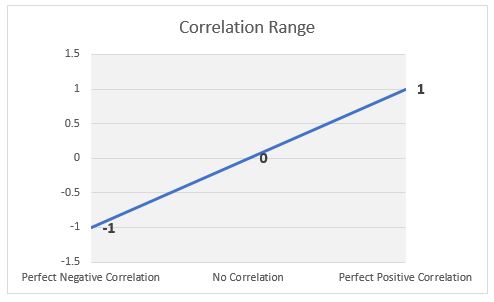 You’re not likely to find perfect correlation, positive or negative. But you can easily find strong correlation. That’s 0.8 or higher (-0.8 or lower for the other end of the spectrum). +/- 0.5 is correlated, but it’s weak at best.

So where do you find correlated stocks? Well, just look at a particular industry. Companies that operate in the same industry or sector should have pretty strong correlation.

For an example, let’s use Exxon and Chevron, two huge oil companies.

Most trading software has a correlation calculator for you to use, but in case yours doesn’t, I’ll explain how to find it with Excel.

First, get the prices from a particular period in the past. Then set them up in columns next to each other.

Once you’ve got your data, use Excel’s correlation function (CORREL). Your equation should look a little like this depending on how many rows you’re comparing: “=CORREL(B2:B33,C2:C33)”

Hit enter and you’ve got the correlation. If it’s above 0.8, then it’s time to move on to the next step.

Now you can get an average price ratio. And you’re almost there.

If you don’t know how to calculate standard deviation, fear not. One, you’re in the majority. And two, Excel does it for you.

Again, depending on the number of rows of data you have, your formula should look like this: “=AVERAGE(D2:D33)+STDDEV(D2:D33)*2”

Hit enter, and you’ve got your crossover point. Once the price ratio crosses that line, there’s a divergence. And there’s also an opportunity.

But Does It Work?

Now that the calculations are out of the way, let’s take a look at Exxon and Chevron, and we can see how it works. Because there’s actually an opportunity with these two.

Exxon and Chevron are usually highly correlated. In fact, before October 17th of last year, their correlation coefficient was above 0.85. That’s strong. But after that date, the correlation drops drastically — to 0.5. That’s weak. 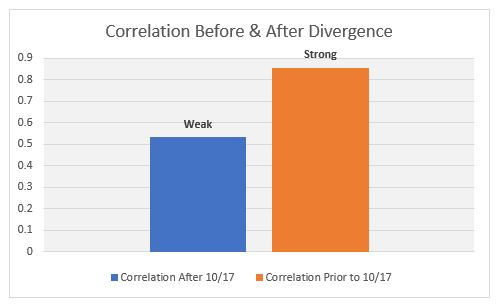 I mean, looking at the price charts of the two, you can see them moving almost in lockstep up to that point. So, what gives? 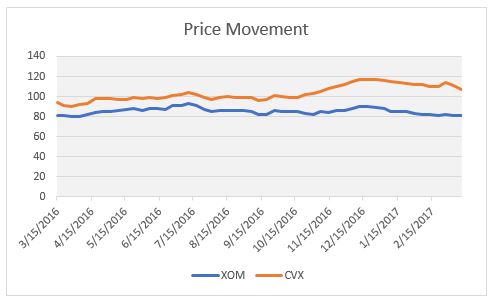 After October 17th, they started to drift apart. Chevron’s price moved up faster. It’s a little tough to see in the price chart, but when you look at a chart of the price ratio, it becomes very clear. Right at the dot in the chart, the price ratio starts to get much bigger. 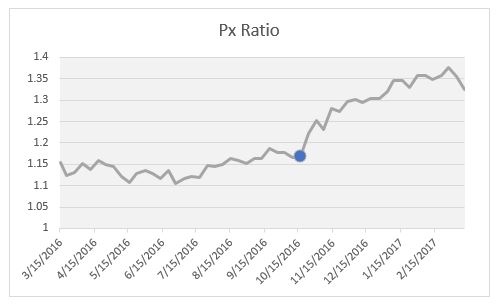 And it just so happens that dot represents the point where the ratios moved more than two standard deviations away from the average.

That means the two companies — that are in the same industry and have almost the same fundamentals — are trading differently. Chevron is moving higher faster than Exxon. And that’s where the opportunity exists.

Either Chevron will lose some share value, or Exxon will gain it. Or both. But whichever happens, you can make some money from it by trading the pair.

It works the same no matter the industry: You short the overperforming stock and go long the underperforming one. If both go up, your profits from the long will cover any losses from the short. And vice versa if they both go down. But if they both move back toward the historic correlation, you’ll get a gain from both.

Any Industry, Any Market

The best thing about pairs trading is that it works in any market. In fact, it completely negates the market. Doesn’t matter what it does — up, down, sideways. You’re not trading the market. You’re just trading the stocks and their correlation.

So, you’ve got one opportunity in Exxon and Chevron. But there are innumerable others out there. Coke vs. Pepsi, Lowe’s vs. Home Depot, Greenbrier vs. CSX... the possibilities are nearly limitless.

Just use the tools in your trading software to spot divergences in correlation. Or use the Excel calculations I showed you. And start using the numbers. Because, as I learned so many years ago, they don’t lie.

To investing with (and looking for) integrity,