Options Action Friday: Sell Your SBUX Call(s) for a 209% Gain

Congrats on another big win in just a week’s time! And just so there are no misunderstandings:

Now, onto an equally pressing market opportunity for you.

I’m going to cut right to the chase.

I have the secret recipe for big gains in tech for the second half of 2021 — gains that could reach as high as 3,461% — and today I’m going to show you how it’s all possible.

The simple laws of supply and demand dictate that there will be a sustained rise in the price of semiconductors — a trend that, according to most experts, will last upward of two–three years.

The analysts at Gartner predict the current semiconductor shortage will last until the second quarter of 2022.

CNBC reported that "Glenn O’Donnell, a vice president research director at advisory firm Forrester, believes the shortage could last until 2023."

Intel CEO Pat Gelsinger is even less optimistic. Speaking at a trade show earlier this year, he noted the chip shortage could last a “couple of years,” according to a report from Yahoo Finance.

Everybody needs chips, and they need them now, in bulk. But most importantly, even in the wake of rising prices due to a shortage in raw materials and other supply chain issues, folks can't simply substitute chipsets for different ones. Semiconductors are an inelastic good in our modern economy.

For example, if the price of beef rises too much for my budget, I can buy chicken. But a company like Apple, which relies heavily on Taiwan Semiconductor Manufacturing Co.'s (NYSE: TSM) A-series chips for its iPhones, can’t just stop using TSM chips, because only the TSM A-series is specifically configured to work with Apple’s proprietary technology.

All this adds up to a fantastic bull case for the semi sector.

Of course, noting the trend and capitalizing on it are two very different things.

We Scored on SMH Calls and AMD Shares

About a month and a half ago, on June 7, I recommended you take a stake in Advanced Micro Devices Inc. (NASDAQ: AMD). You can see my bull case for the company here. As of midday Thursday, we’re up 11% in just six weeks with a lot more room ahead for shares to run. And as for beating the greater indexes, the chart below shows how much better AMD (black line) is performing against the S&P 500 and the Nasdaq since my recommendation. 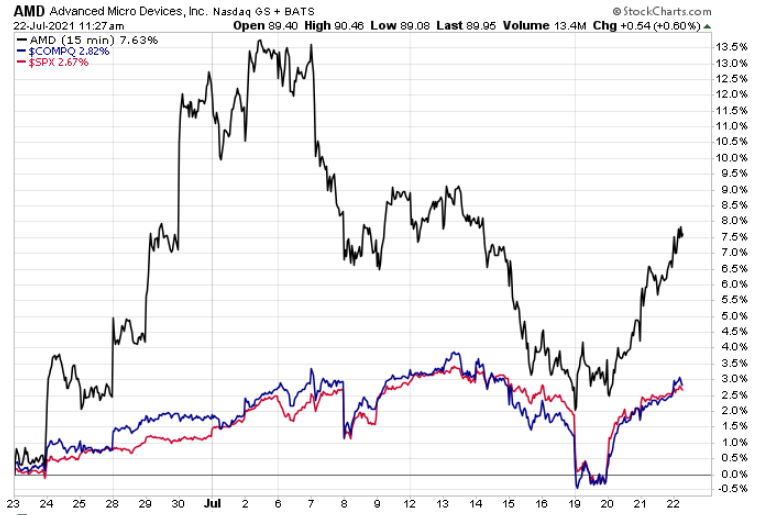 As we enter the fall shopping season, followed by an ever-more tech-heavy holiday buying season, the bull case for the semi sector is strong.

Another great way we have put real money in our pockets this summer thanks to the semiconductor tailwinds is with bullish call options on the VanEck Semiconductor ETF (SMH).

On June 25, based on the same premise I outlined above, I recommended you take action and buy one or more VanEck Vectors Semiconductor ETF (SMH) July 2021 $260.00 call(s) that expired today, July 23. The cost was $335 per contract.

Readers who took my advice on that action were “in the money” quickly and able to lock in a flash gain of at least 56% and upward of 108% in just one week!

But That’s Not All…

I can’t emphasize strongly enough how important semiconductors are to our modern economy. They’re the key ingredient required for all modern innovations.

Semis are the backbone of almost every single piece of technology in the world.

The Washington Post notes that "semiconductors are critical to the functioning of a wide range of everyday products, from cellphones to computers to state-of-the-art refrigerators. They are also the brains that operate an array of weapons systems."

The Guardian calls these chips "the ‘brain’ within every electronic device in the world."

As reliant as we are on these chips, we hardly make any of these products domestically in the United States.

But that could all change, and very soon. According to my inside sources, a bipartisan effort to make America the leader in semiconductor technology is now being quietly discussed behind closed doors on Capitol Hill. Rough estimates from leaked information suggest this infusion of stimulus could introduce over $50 billion into the U.S. semiconductor market in the coming months.

The likelihood of this occurring as part of a new U.S. infrastructure bill is quite high...

Which means if we want to capitalize on the tiny U.S. companies that could skyrocket more than 3,000%, we have to act now.

To learn more about this explosive opportunity, click here now.