Energy will remain among the safest and most profitable markets for long-term investors.

Population growth, global urbanization, and economic development will continue to be primary factors driving world energy demand higher over the next several decades.

In its annual World Oil Outlook report, released last week, OPEC forecasts total global demand for energy increasing from 286 million barrels of oil equivalent a day (mboe/d) in 2018 to over 357 mboe/d in 2040. 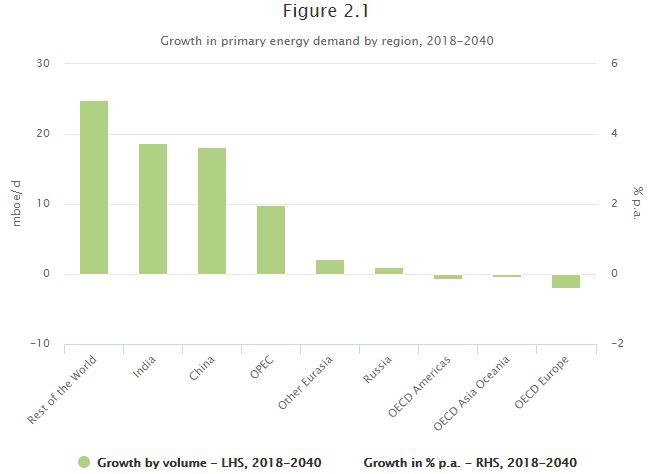 OPEC notes that crude oil will begin to play a smaller role in the energy mix over the next several years. But the group says crude will still remain the largest overall contributor, accounting for around 28%.

So the oil markets look to be in good shape.

OPEC estimates a slight increase in coal demand over the next two decades but says natural gas will overtake coal as the world's second-largest energy source in the next 10 years.

Much of this demand can be credited to the development of the liquefied natural gas (LNG) industry, particularly in the U.S.

Non-OPEC total liquids supply is projected to grow by 9.9 mb/d between 2018 and 2024, reaching 72.2 mb/d. This is mainly driven by the return of modest increases in upstream investment and healthy demand. US tight oil is forecast to continue to expand at a strong pace, contributing just over 60% of this medium-term non-OPEC supply growth.

While oil, natural gas, and coal will continue to dominate the energy industry's market share, the fastest-growing source of global energy remains renewables.

OPEC says, “Other renewables, which includes solar, wind and geothermal power, is expected to be the fastest growing source of energy, expanding on average by 6.9%. Demand for other renewables is seen rising by nearly 18 mboe/d between 2018 and 2040.”

In the report, OPEC credits climate awareness, the use alternatives, and stricter environmental regulations as players working to dampen demand for its fossil fuel products. But it states, “Policy is not as significant a factor when compared to the resource base, technology and economics.”

OPEC does, however, seem to acknowledge U.S. shale oil as a worthy competitor to its business. The organization notes, “The current US administration has pledged to open up large areas of untapped federal land, including the eastern part of the US Gulf of Mexico and large parts of Alaska.”

Going forward, OPEC doesn't seem to be making any real plans for big changes in operations. The group still hopes to increase oil production in the coming decades, as it expects non-OPEC production to peak in 2026.

For investors looking to park capital in long-term positions, there's still no better place than the energy market.