OPEC: The Beginning of the End

There's a moment that every oil-exporting country will experience, sooner or later.

The few select countries lucky enough to label themselves "oil exporter" know it — and have nightmares of the day their number is up.

Because we live in a cutthroat, fossil fuel-driven world — a reality we have little chance of changing in our lifetime.

Still think everything is right with the world's oil production?

Let us take a lesson from a country that's been through the ropes...

Collapsing under the weight of peak oil

For Indonesia, the point of no return came in 2004.

Unfortunately, Indonesia's demand for crude oil had more than doubled since the 1990s. 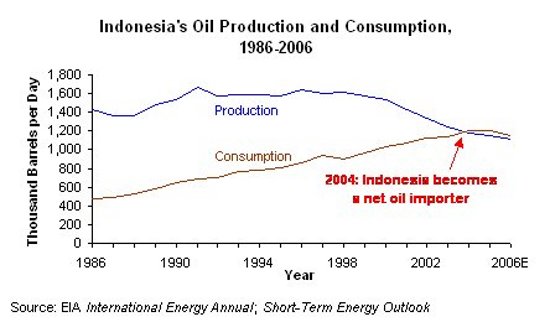 The country was destined to become one of the bottom feeders, an energy-dependent slave to the same people they once called equals.

Of course, becoming a net importer had other devastating effects...

Like most OPEC countries, Indonesians were living in a world of dirt-cheap gasoline, thanks to subsidies.

In 2005, President Yudhoyono announced a rollback of those subsidies... By the end of the year, fuel prices soared 125%.

By 2008, the lack of reinvestment had killed any chances of regaining their former glory. In May, Indonesia was forced to withdraw from OPEC.

At least OPEC was nice about it... The group had left the door open for Indonesia's return, should Indonesia wish upon a star and come up with their miracle.

OPEC: The beginning of the end

Right now, the same story is playing out again.

I want you to try and imagine Americans getting upset over fuel prices. Not too difficult, right?

At one point or another, you've felt that frustration. I remember watching a guy spend more than $80 to fill up his gas guzzling SUV.

On the West Coast, the idea of $5 or more for a gallon of gas may not seem so bad... But picture an entire country rioting over $0.38 a gallon.

Well it happened — and a lot more violently than you might be aware of.

In 2007, Iranians burned gas stations when the country announced an unpopular gas rationing. If they wanted to get more than the allotted 26 gallons per week, they had to pay more.

In 2010, it may be happening again... The country said last month it will stop the sale of subsidized petrol in September.

Iran — which produced 3.8 million barrels per day in 2009 — has a severe lack of refining capacity.

At what point will Iran, OPEC's second largest oil producer, suffer the same fate as Indonesia? 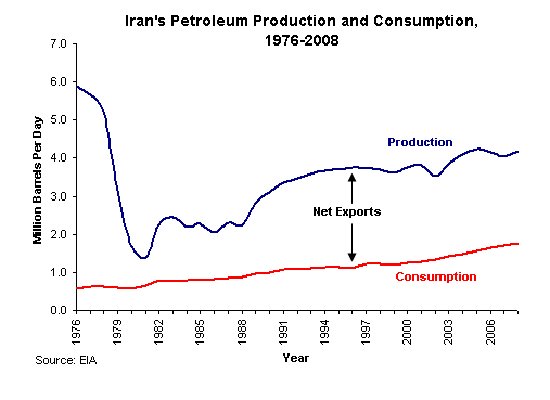 As the story unfolded for Indonesia, I'm afraid it's only a matter of time for these other once "export countries".

Oil in the ground is worthless

If all we did was read the headlines, Venezuela is on top of the world.

The country is attempting to add its oil deposits in the Orinoco Belt to its reserves. For the record, that would add another 105 billion barrels, putting them safely atop the list with 316 billion barrels (the Saudis have approximately 264 billion barrels).

Unfortunately, oil is absolutely worthless when it's in the ground, which is where most of Venezuela's oil will stay.

The problem is the oil deposit in the Orinoco belt isn't the same as the light, sweet crude from the Bakken formation... Or even the light, seawater-tasting oil pumped from Saudi fields.

And an even bigger hurdle for Venezuela is how to develop that oil. The country sorely lacks the expertise to do the job. Also, Chavez gave the boot to foreign companies after his May day takeover.

If you recall, that was when Chavez wrested control of Venezuela's oil fields from companies like ExxonMobil, Chevron, Conoco Phillips, Statoil, and BP Plc.

I'm sure Chavez and his advisors are sitting the dark, salivating over the thought of screwing the next round of oil companies to set foot in Venezuela.

The other side of the fence

For other OPEC members, the outlook for oil production isn't too bright. Saudi Arabia is flirting with the idea of stopping future oil exploration; Iraq and Kuwait have realized how precious their oil has become, and are refusing to give it away cheaply.

When I look closely at the situation, I see nothing more than huge nationalized oil companies sitting on oil fields that have mostly peaked.

But don't let the doom and gloom get your hopes down... That's what separates the smart investors from the herd.

And it's why we don't put our hard-earned money into Venezuela's heavy oil trap.

If you haven't noticed, the peak oil crisis represents a huge window of opportunity. Although the Ghawar oil field is more akin to a wishing well, my colleague Christian DeHaemer just revealed the name of a tiny oil company that just struck oil in the most unlikely of places.

You can learn more about this opportunity in his brand-new report.

P.S. For those investors looking for profits closer to home, it doesn't get better than the old-fashioned oil boom taking place in Alberta... My readers and I tapped into one Canadian oil driller with an ace up its sleeve. Find out about the company leading North America's oil comeback.