OPEC+ in Damage Control Mode — Will Its Plan Save Us?

In case you haven’t heard us sounding the alarm bells, oil has taken a nosedive these past three months. 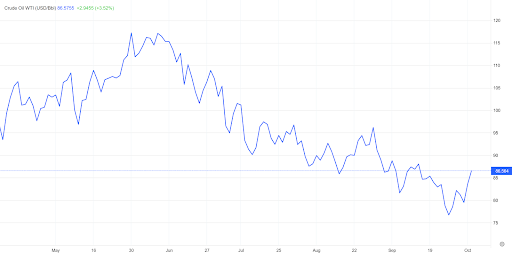 OPEC+ is reportedly planning what could be a historic production cut to stave off a catastrophic bear market. The Saudi-led cartel and its Russian-led co-producers have already been hurt by the $30 drop in crude prices since May.

Rumors say the cuts could be as much as 1 million barrels per day, one of the biggest reductions in years. Don’t let the Saudi energy minister’s casual tone fool you — this is not just a routine adjustment.

Given the state of the market, this much damage control might be just enough. The Federal Reserve is chasing the inflation dragon with endless rate hikes, Putin is edging dangerously close to a nuclear climax, and China is still under lockdown.

Supply is already outpacing the dwindling demand. Why else would these energy tycoons be in such a hurry to prop the market up?

A response this urgent and immediate means OPEC+ is terrified of the upcoming market slump.

Taking 1 million barrels of oil per day off the market might put a dent in the global supply, but it would also greenlight a huge boom in U.S. production. I can think of a few companies in particular that would love to fill that vacuum.

How Badly Can OPEC Mess Things Up?

Analysts have actually been doubting OPEC’s ability to sway the market for years.

The group's announcements carry plenty of weight in terms of investor sentiment, hence the nearly $4 jump when news of the cuts hit the airwaves.

But much to the group’s dismay, the global energy market isn’t remotely the same as it was during those early years.

When OPEC was first created, very few nations had the ability to produce a sizable amount of oil. There were also no alternative fuel sources since natural gas was still being flared off as a waste product.

Your choices were simple: Buy from OPEC, or don’t buy at all. That “My Way or the Highway” approach has made a few nations unfathomably wealthy since then.

Nowadays, the market is more flexible. Thanks to the American shale boom, supply can suddenly scale up or down with demand.

OPEC members can conspire all they want — it won’t stop U.S. producers from taking advantage of tight oil during high price times.

If OPEC wants to jack up prices, shale producers will simply start fracking more. When prices sink, those wells close up shop and producers go after the easy oil.

That ebb and flow dulls the impact from any cartel activity, stabilizing the overall global price and blocking OPEC from total world domination.

It helps prevent most of the trickery on the supply side, but the market is still subject to the wild whims of the planet’s energy demands. I can’t deny that.

So What Can We Do About It?

For those of us who aren’t members of an upper-echelon oil price-fixing gang, there are still plenty of ways to make money.

A fair word of warning, though — it’s not easy.

Whatever OPEC decides, investors need to be prepared for reality. If the production cuts send prices through the roof, a few producers in particular stand to make a killing.

The energy market was in a historic bull run this past year. During that time, our readers made a killing simply by doing their due diligence and following tried-and-true methods.

On the other hand, you’ll need to forget all of that during a bear market. If OPEC fails to reach a decision, as it so often does, you’ll need every trick in the book to stay in the green.

Strategies that once felt foolproof can easily tank your portfolio when sentiment turns negative. Every decision counts when the market is in a downward spiral like this.

Are you still reading, or did I scare you off?

It sounds daunting, but there is still plenty of money to be made during a bear market. Making the right moves here will set you up handsomely for when the market turns positive again.

And it will turn positive again, mark my words. What goes down must (almost) always come up.

Don’t be intimidated. Follow this guide to stay a few steps ahead of your fellow investors. Almost all of them make some of the blatant mistakes mentioned in the instructions.

Don’t trust me? Let our resident energy expert Keith Kohl explain everything himself in this free presentation. Don’t let your journey end here — there’s always money to be made.