Every Oil Man for Himself

Hopefully you're not waiting for a global peak in oil production.

If that's the case, I have some bad news for you...

It already happened... five years ago.

I'm sure you remember when the International Energy Agency (IEA) reported in last year's World Energy Outlook that a global peak in oil production occurred back in 2006.

What other people — particularly those who refuse to believe in $100/bbl oil — are finally starting to realize is that cheap, plentiful oil is a thing of the past.

Allow us to show you the oil of the future, courtesy of the IEA:

As you can see, the energy spent wishing and hoping for more easy-to-get conventional oil is better spent elsewhere.

As my colleague Nick Hodge has brought to my attention more than once, “The oil of tomorrow isn't oil.”

In the case of our liquid fuels supply, he's absolutely right.

Nick's is a point the IEA has recently reiterated, estimating nearly 60% of oil supply increases over the next few years will come from NGLs — especially from the mighty OPEC, whose members control approximately 40% of the world's oil. 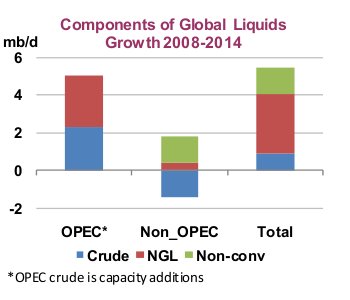 Don't worry; we don't have to slip them a note in class. They know full well how precious their crude supply will become going forward...

And you can bet they're going to squeeze every last cent out of their wells.

Fighting to the Last Drop

Apparently they're not after the Saudi crown — not yet.

Why would they be? Oil prices are no longer in the basement, and crude prices have jumped even higher — more than 200% since the crash in 2008.

Knowing that conventional oil production is just starting to slide down the backside of the Peak Oil curve, they're looking further down the road.

Iraq currently produces a little over two and a half million barrels of oil per day.

Overall, OPEC is pumping out less oil as well. In April, the 11-member crude club produced an average of about 26.2 million barrels per day, approximately 344,000 barrels less than the previous month.

Although Libyan oil production took a serious hit as Gaddafi continues to fight off rebels, remember that OPEC still managed to beat its April output by nearly a million barrels a day...

Then again, adhering to production quotas has never been a strong suit for members. Take the Saudis, for example.

The undisputed heavyweight champion producer of OPEC pumped out more than 9 million barrels a day during the month of February.

Tsk, tsk... That means they cheated their quota by more than a million barrels per day? I guess with Brent crude breaking $125/bbl and WTI over $110/bbl, it was too much to resist.

But it's okay. After all, they lowered their March production target to 8 million barrels per day — and then beat that amount by 500,000 barrels per day.

Hey, at least they're consistent.

If nothing else, the build-up to triple-digit oil prices has caused a surge in oil drilling — even moreso as the oil-to-natural gas price gap widens: 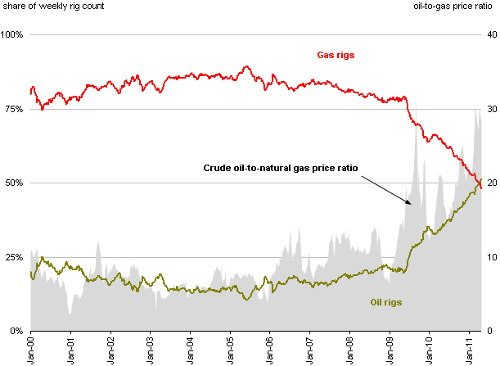 For the first time in decades, there are more rigs drilling for crude oil than natural gas.

The number of oil and gas rigs now drilling in the U.S. has risen to 1,836 this week, and we've seen time and again that there are still plenty of shale opportunities out there...

Every Investor for Himself

Let's be honest. Did we really expect OPEC to look out for anyone other than OPEC?

Of course not. Cheating on production quotas has become as much of a running joke as their oil reserves.

What we do know, however, is where we'll be getting our future oil supply. Spoiler alert: It won't be from the super giant oil fields of days past.

So if the Ghawars and Cantarells of the world are losing steam, what's next on the agenda?

Never forget that world oil production is shifting from those massive oil giants to smaller fields. And one thing we can count on is that producers will need to drill deeper than ever before, both onshore and offshore.

Recently, we mentioned how some of the best long-term investments can be found in pipeline stocks across Canada and the United States, but we don't want to discount the long-term value of those offshore drillers...

Even the largest oil spill in history (thanks again, BP) won't be able to hold back offshore drillers in the long run: 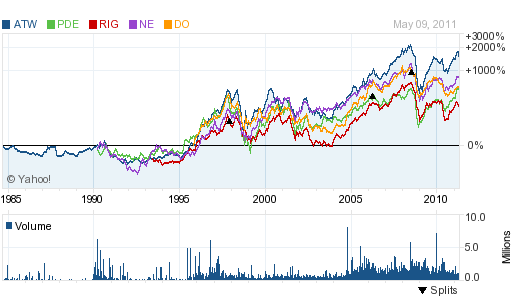 I'll let you make up your own mind when it comes to OPEC's mind games.

But the truth is it doesn't matter.

They'll continue to try and control oil prices as best they can... and we'll be profiting alongside their manipulation.

P.S. Not even the shale boom happening across North America is without scrutiny. At the heart of the problem is the growing public outrage over the hydraulic fracturing process. Accusations from tainting drinking water to destroying the rock formation (whether valid or invalid) have covered the headlines in every major shale basin from the Marcellus to the Bakken. But as with every crisis, there's a solution... We've uncovered one small company that uses absolutely no water, soon to take a foothold in the U.S. shale industry. Read on for more on this explosive investment opportunity.